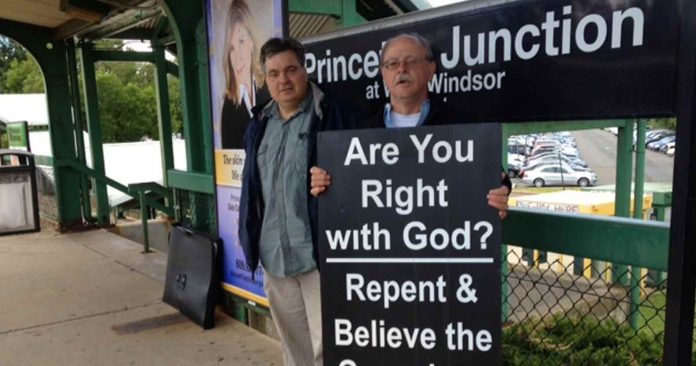 West Windsor, NJ — (Rutherford Institute) Two street preachers are targeted, confronted and eventually arrested by transit officers who insist that they stop talking about their Christian beliefs without getting the agency’s permission first, and the courts say that’s all right.

But the Rutherford Institute thinks otherwise, and that’s why it’s seeking a rehearing before the entire 3rd Circuit Court of Appeals in a First Amendment case involving preachers Don Karns and Robert Parker.

A panel of the appeals court previously ruled that the two transit officers, Kathleen Shanahan and Sandra McKeon Crowe, were justified in ordering the preachers to be quiet, grilling them over their activities, and then arresting and charging them – all because they were sharing their beliefs in a public location.

“This case sheds light on a disconcerting bureaucratic mindset that wants us to believe that the government has the power to both bestow rights on the citizenry and withdraw those rights when it becomes necessary, whether it’s the right to proselytize on a train platform, the right to address one’s representatives at a city council meeting, or the right to be free from unreasonable searches and seizures,” said constitutional attorney John W. Whitehead, president of the Rutherford Institute.

“Yet those who founded this country believed that our rights are unalienable, meaning that no man or government can take them away from us. Thus, the problem in this case is not the absence of any specific law allowing free speech on the train platform. Rather, the problem is government officials who have forgotten that they work for us and their primary purpose is to safeguard our rights.”

Rutherford is seeking a rehearing in the case that erupted when Karns and Parker were preaching at a Princeton, New Jersey, train station.

They were charged with trespass and obstruction of justice but eventually cleared of the charges.

They then sued the New Jersey Transit Corp. and the officers over the demand that they “obtain a permit” to talk, non-commercially, with others at the public station.

The appeals court panel said the officers were immune from claims that they violated the preachers’ constitutional rights – under the First, Fourth and Fourteenth Amendments.

It was on June 26, 2012, when Karns and Parker began sharing their Christian beliefs with members of the public at the Princeton Junction Station of the NJTC.

“No notices were posted at the station prohibiting or restricting First Amendment activities,” Rutherford explained.

But they quickly were confronted by Shanahan and Crowe, who first demanded identification, then told them they could not speak without the agency’s permission.

When Karns and Parker asserted the train station was a public area, they were arrested.

After they were cleared of those counts, the Rutherford Institute filed a civil rights case against the officers for discriminating against them on the basis of the religious content of their speech.

Constitutional attorney and author John W. Whitehead [send him mail] is founder and president of The Rutherford Institute. He is the author of A Government of Wolves: The Emerging American Police State and The Change Manifesto (Sourcebooks).