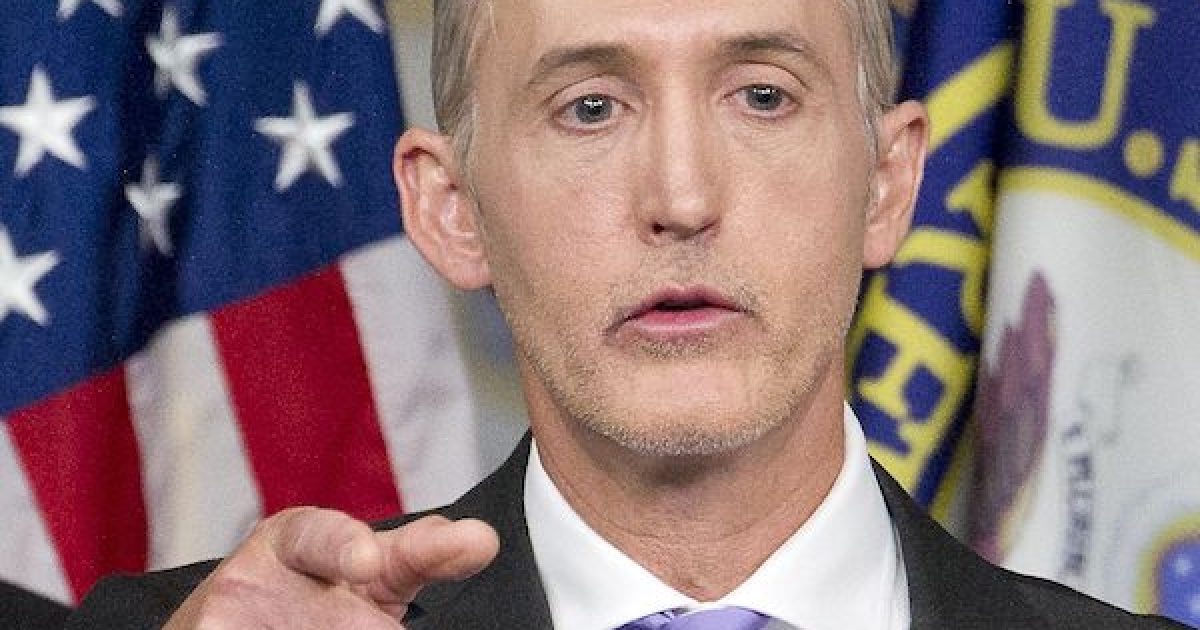 In an interview Thursday morning with Fox News host Bill Hemmer, Gowdy issued a statement that even Senator Dianne Feinstein (D-CA) has agreed with.

Gowdy was asked what he would say to Americans who claim that Congress doesn’t act on things like mental health or guns.

“The first thing I would say to this generation of children is how sorry I am you have witnessed school shootings, mall shootings, concert shootings,” Gowdy began.  “There is no place that seems safe in our society.”

“So, as devastating as the loss of life is, the loss of innocence for this generation of children, I don’t know anyone who would not pass a bill today that would prevent the next mass shooting.” he continued.

That’s right, because no ink on paper will stop a criminal from committing crime!  Isn’t that the point of the law in the first place?  To simply determine who the criminals are?  Law doesn’t stop criminals.

As I said before, even gun-grabber Dianne Feinstein agrees that there is no law that will stop a mass shooting.

Following the Las Vegas shooting, Feinstein was asked if there were laws that could have prevented the shooting?

“I don’t know. I would have to take a good look at that and really study it. I’m not sure there is any set of laws that could have prevented it,” she told NBC’s Chuck Todd.

She then followed up on CBS’ Face the Nation and told host John Dickerson that the Las Vegas shooter wouldn’t have been stopped by more gun laws. “He passed background checks registering for handguns and other weapons on multiple occasions,” the Senator admitted.

This is so important to remember because it tells you that when someone cries for more laws, they already know those laws will not stop crime.  So, when they admit those laws won’t stop crime, but continue to push for them, you know they have an agenda, and an unlawful one at that.

As for Gowdy, he did reference trying to find out how Nikolas Cruz obtained the weapon he allegedly used, but he went on to speak about the alleged “gun show loophole” and asked, how many mass killings have resulted from guns purchased at gun shows?

Furthermore, let me throw in the fact that it amazes me that an American citizen, who has a God-given right to keep and bear arms, has to prove his innocence before he can purchase said arms and exercise his right.  We don’t do that with other rights, do we?  Nope, just the guns.

Gowdy went on to talk about prosecuting prohibited persons from owning guns as means to “avoid the murder.”

Well, often some of these people who are prohibited from owning a gun, shouldn’t be in the first place.  Many times there are individuals who don’t pay a mandatory child support because they know there are crimes being committed against their children and have informed those who are to enforce the law and they do nothing about it.  They then end up prohibited, even though they have actually not committed a crime.

However, if someone has committed a violent crime such as rape, murder, kidnapping or other crime, they should not be put in jail for the remainder of their life, and possibly let out.  They should be put down, ie. the death penalty.  Imagine if that were done for just a moment, and I say the more local the better.

Immediately, you would end this nonsense of background checks because those who truly lose their rights to keep and bear arms are dealt with justly.  By keeping these people in jail, we not only commit an injustice against them, but every other citizen forced to pay taxes to keep up a prison system, feed, clothe and house the criminals, many of which committed crimes against them or family members.  Does that sound just to you?  Me neither.  Furthermore, we would not have to play these little games about registries and denying them their rights once they completed their sentence.

But no, we won’t actually think about justice.  We only want to think about more ways to grow the tyrannical beast, infringe on the peoples’ rights and engage in gun prohibition.

Still, we learned several years back that the federal government just doesn’t prosecute a lot of people who simply lie on their ATF forms in order to purchase a gun.

According to an interview in 2013, Jim Baker of the National Rifle Association spoke with the Daily Caller and said that then-Vice President Biden told him, “regarding the lack of prosecutions on lying on Form 4473s, we simply don’t have the time or manpower to prosecute everybody who lies on a form, that checks a wrong box, that answers a question inaccurately.”

If you aren’t going to prosecute lying on a form and “don’t have the time or manpower” to do so, then how in the world do these gun prohibitionists plan to deal with more people that they will turn into criminals simply by passing legislation against the Constitution?

In the end, Gowdy is right.  There is no law or amount of laws that can be written to stop a criminal.