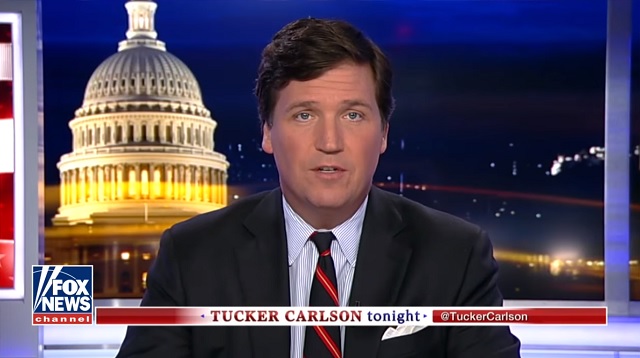 Tucker Carlson said Thursday on Fox News that psychiatric drugs, social alienation, the destruction of the nuclear family and the war on men are far more relevant topics to discuss than gun control if our goal is to stop mass shootings.

This man is the number one voice of reason on TV.

In the wake of the Florida school shooting, many on the left have renewed their calls for stricter gun control legislation.

Tucker Carlson suggested the attack on the Second Amendment isn’t about protecting American citizens, and it’s actually “a kind of class war.”

He said it’s important for our country to get to the bottom of what is actually causing the mass shooting epidemic, but that’s not happening.

“That vital conversation has been drowned out and made impossible by mindless screeching about gun control, led by blustery charlatans in the media … and in Congress, whose only real agenda is moral preening,” Carlson said. “They aren’t trying to solve the problem. Their aims are darker.”

He argued that many liberals want a landmark gun control bill like the one Australia passed in 1996, which amounted to “gun confiscation.”

He said the liberals’ goals are gun seizures, ammunition regulation and disarming the American population, resulting in a country where only the people in charge have guns, and everyone else obeys.

“The calls you’re hearing today for gun control have nothing to do with protecting Americans from violence. What you’re witnessing is a kind of class war,” Carlson said. “The left hates rural America, red America, gun-owning America, the America that elected Donald Trump.”

“They call it ‘gun control.’ It’s not. It’s people control. For the left, voters who can’t be controlled can’t be trusted.”

In contrast to Tucker’s comments, this is the advice that’s coming out of the left: Let’s take a look at how America has changed since the 1960s.

Demographics have shifted dramatically since the passage of the Immigration and Nationality Act of 1965.

Violent crime rates have skyrocketed and despite falling since the 1990’s they’re more than double what they were in 1960. Out of wedlock births are skyrocketing. Economic gains are mostly being concentrated in the hands of a tiny globalist elite. Debt levels across the board have skyrocketed. The US went from a creditor nation to a debtor nation. Deaths of despair among the white working-class are surging (and this is being cheered by the left). White women are now drinking themselves to death at record rates. One in four women are now on psychiatric drugs. Divorce rates are also way up. Might it be possible that these issues have a bit more impact on our society than gun ownership?

Not Just The President – Trump’s Tax Returns Expose How The Political Elite Have Rigged The System
September 29th, 2020 Sons of Liberty Media

Based on latest CDC data, the Wuhan coronavirus poses virtually no...