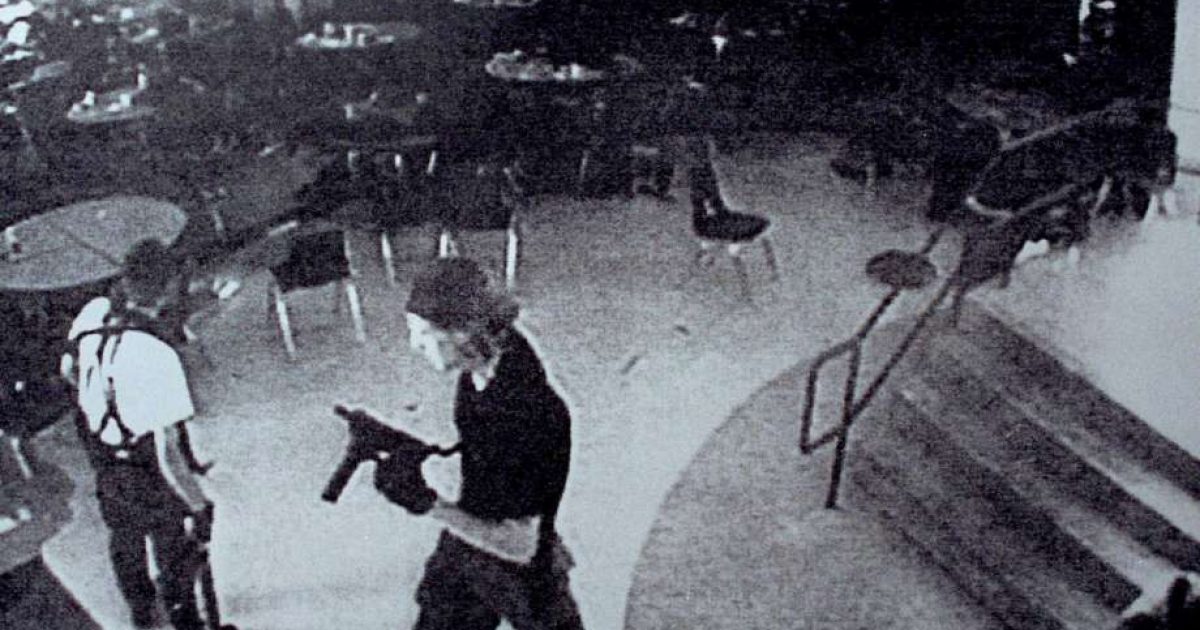 Last week, the united States suffered another mass shooting incident in a school in Parkland, Florida, killing 17 students.  Right on cue, anti-constitutionalists called for the government to implement a solution in the form of gun control.  Activist actors, like Michael Keaton, used social media to blame the shooting on the “weak disgusting” NRA and Republicans, as well as five other shootings occurring since Columbine High School in 1999.  At a candlelight vigil in Parkland for the shooting victims at Marjory Stoneman Douglas High School, chants of “no more gun” broke out.  The Associated Press declared the suspected shooter, Nikolas Cruz, belonged to a “white nationalist group” when no evidence exists to support such a claim.  Moreover, a report claimed the FBI received a warning about Cruz in September 2017 when a comment on a YouTube video, using the name “Nikolas Cruz,” stated, “I’m going to be a professional school shooter.”

Does a pattern emerge here similar to other mass shootings and/or bombings since 1999?  Yes, it does.  The outline above makes it clear.  Unfortunately, many citizens are not getting it.

One clear point in the majority of these incidences is the federal law enforcement agency known as the FBI had warning, yet dropped the ball in its investigations.

Now, many would like to focus on the FBI dropping the ball because of the “politicization” and bias exhibited by high-ranking FBI officials against constitutionalists, Donald Trump, individual God-given unalienable rights, Christians, patriots, and a plethora of other “labels.”

But, some citizens already know where the federal and some state governments stand when it comes to the Second Amendment, meaning the inaction of the FBI is no surprise.

Moreover, each time an incident like this occurs, some people, government officials, celebrity activists, and some in the lamestream enemedia call for government to provide a solution in the form of violating individual God-given unalienable rights – no surprise there either.

So, if we assume the underlying problem in mass shootings is firearms, the assumed solution is gun control or gun confiscation by the government – a government that failed to address a threat about which it received warning.

But, the assumption the underlying problem in mass shootings is firearms is incorrect and downright false.

It does serve an agenda – confiscation of guns means government and anti-constitutionalists have full control of the people to implement any injustice seen fit to serve its own needs.

As a society, are we comfortable blaming inanimate objects for the actions of an individual?  Anti-constitutionalists are but only when it involves firearms.  There is no call for vehicle confiscation when an individual driving drunk kills another individual in a car accident.  The individual is held responsible.  What about killings involving knives?  No one calls for knife control or confiscation.  The reason given for not blaming cars, knives or any other inanimate object, excluding firearms, for another’s death is usually cars and knives are not instruments of mass murder – these objects don’t murder multiple individuals in a short period of time and don’t instill the fear in many like firearms do.

Society has a very short memory.  How long have firearms been in this republic?  Firearms have been in this republic since before this land was a republic.  How long have mass shootings involving firearms been occurring, outside of the mafia wars during the Capone era?  According to mysanantonio.com, the first occurred in 1949 when Army veteran Howard Unruh killed 13 people while walking in his neighborhood in Camden, New Jersey.  This was shortly after World War II.  It took until 1966, 17 years, for the second incident to occur at the University of Texas in Austin.  The third incident occurred 18 years later in 1984, with the fourth incident happening in 1986.  Looking at the timeline, these mass shooting started occurring more frequently with Columbine in 1999.  So, can we really conclude that firearms are the issue when history shows the united States has only recently experienced an uptick in mass shootings involving firearms?  Anti-constitutionalists and politicians would like for the public to believe it is because of firearms;  however, it isn’t.

Howard Unruh suffered from paranoid schizophrenia according to the report.  No motive was established for Charles Whitman for the 1966 Texas Tower shootings at the University of Texas, but officials suspected mental illness.  James Oliver Huberty, responsible for the 1984 McDonald’s mass shooting in San Ysidro, California, expressed to his wife he suspected he had a mental problem.  Pat Sherrill, the post office worker who killed co-workers in Edmond, Oklahoma, was described as “crazy Pat” because he exhibited strange behaviors and was often angry and depressed.  Sherril was a Vietnam War Veteran that a psychiatrist suspected of having “factitious post traumatic stress disorder.”  Luby’s cafeteria perpetrator, George Hennard, was found to have drugs and alcohol in his system when he killed 23 people and injured 20 others in Killeen, Texas.  Hennard committed suicide after his murderous spree.  Psychiatrists postulated that Eric Harris and Dylan Klebold, perpetrators of the Columbine mass shooting, suffered from some type of mental illness.

Starting to see a pattern here?  While some of these perpetrators’ motives are unclear or not established by law enforcement officials, clearly, the problem is not the inanimate firearm.  Yet, this information on motives of past perpetrators, carried in newspapers and reports that anyone can verify on the internet, has been hidden from the public by the lamestream enemedia today and many citizens refuse to do their own research to determine where the problems lie that lead to these incidences.

Beginning in 2009 through to the present, incidences of mass shootings began occurring every year with multiple incidences in some years.  For the majority of those years, Democrat Barack Hussein Obama Soetoro Sobarkah occupied the White House, Democrats controlled at least one chamber of Congress, and federal officials in various departments that fanatically support Democrats, particularly Hillary Clinton, as well as Democrats in both chambers of Congress, and some Republicans have worked to thwart the presidency of Donald J. Trump.   Anyone see another pattern occurring?

Let’s not forget the total war on traditional values and society that began with President Lyndon B. Johnson’s  occupation of the White House and his “Great Society” program.  Johnson,  a power hungry fanatical Democrat, championed big government and the “nanny” state.

For a good take on part of the problem that occurs with the indoctrination of our children in the school system, read Bradlee Dean’s article on Freedom Outpost, “Warning Went Unheeded, Again! Tragedy In Florida:  A Letter from a Student …..”  And, to further outline how society has been altered that is leading to continual problems, read “Tucker:  Psychotropic Drugs, Social Alienation, Broken Families, War on Men More Relevant Than Gun Control” at Infowars.com.

If firearms were the problem, mass shootings would have been occurring since this republic ratified the Constitution.  Yet, that has not been the case.  It seems to have started after World War II, and then experienced a lull until the mid 60s, lulled again until the incidences in the 80s, quieted until the 90s, and exploded during the Hussein Soetoro era.

The problem is society has changed, not for the better in some cases, and government has morphed into the “nanny police” state with an illegitimate, lawless 44th president who fomented much division, creating patriots out of criminals and criminals out of patriots.

The War on the family unit, including values, principles and morals, the government intrusion into the education/indoctrination of our children, the massive unrestrained immigration beginning in 1965,  rapid expansion of government to control every aspect of citizens’ lives, the government’s propensity to satisfy big corporations instead of upholding the Constitution and protecting individual God-given unalienable rights, and the application of the law unequally contributed heavily to the growing problems of individuals today.

Couple this with the government’s marriage to the pharmaceutical industry in order to use a pill for everything from lack of appetite to paranoid schizophrenia has caused just as many more problems due to medication side effects than has been solved through “living by chemicals.”

It didn’t help either that president number 44 created more problems and increased the impact exponentially.

Instead of families taking responsibility for the mentally ill in their midst, many call for government to develop a solution through misidentification of the problem.  In other words, government should implement some additional forms of gun control, leading to gun confiscation, to stop mass shootings while firearms are not the problem or the cause of the problem.

Moreover, government cannot solve the problems of increasing mental health issues when it plays a large role in the creation of those issues.

It behooves government, particularly those in it, to focus the people’s attention to a non-issue, firearms, when the policies and legislation it implements causes the major problems in society.

Nothing government does will address the rising criminal element in our republic.  Criminals will find a way to break the law regardless.

In fact, it is an advantage to government to limit law-abiding citizens through unconstitutional means and use criminals to advance an agenda.

Until the government noose is loosened from around the necks of the citizens and the “nanny police state” abolished, anti-constitutionalists and government will continue the “look, squirrel” method of distraction to prevent focus on who is causing the problem and what exactly that problem is.