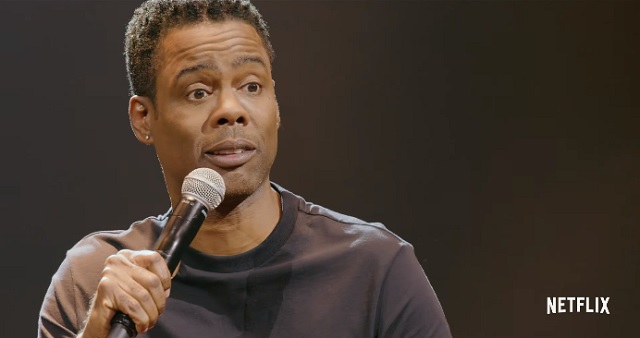 Comedian Chris Rock says in his new Netflix special “Tamborine” that he wants to live in a world with “with real equality,” which means having “an equal amount” of white kids “shot every month” as black kids.

“I wanna see white mothers on TV crying,” he says.

A clip of the show is currently going viral on Twitter:

Here’s some more from The Daily Wire:

Rock’s first bit was about law enforcement, which he portrayed as a group of racists who shoot innocent black children in the street for sport.

Rock continued, explaining that “real equality” would include “white mothers” crying about their dead children.

“I wanna live in a world with real equality. I want to live in a world where an equal amount of white kids are shot every month,” he said. “I wanna see white mothers on TV, crying, standing next to Al Sharpton, talkin’ about, ‘We need justice for Chad.'”

“Whenever a cop guns down an innocent black man,” said the 53-year-old later in the routine, they call the cop a “bad apple. … Bad apple: that’s a lovely name for murderer.”

As the federal government’s data shows, far more white people are fatally shot by police than black people. A 2015 Washington Post study found that 49% of those fatally shot by police were white, while 24% were black. The fact that more white people are shot than black people is of course unsurprising because whites represent a higher percentage of the population than blacks (62% and 13%, respectively). According to that study then, blacks are 2.5 times more likely to be fatally shot than whites. However, other studies that have drilled into the details of the specific cases more closely, including this Harvard study, found that in similar situations, there is no significant racial disparity in fatal police shootings.