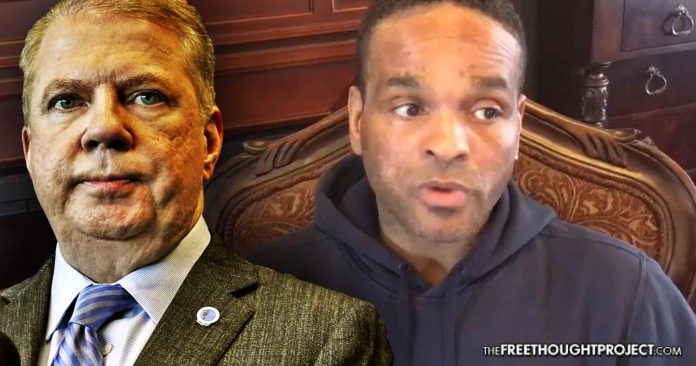 Seattle, WA — Over the past several years, multiple victims have come forward and accused Seattle Mayor Ed Murray of sexually abusing them when they were children in the 1980’s. Delvonn Heckard, one of the alleged victims, filed a lawsuit against the mayor in April of 2017, setting off an investigation by the Seattle Times.

What the Times found was nothing short of bombshell and vindication for his alleged victims. Now, TFTP has learned that Heckard was just found dead in an Auburn motel.

Heckard played a key role in exposing the alleged crimes against children perpetrated by Murray.

According to the Seattle Times, the King County Medical Examiner’s Office confirmed Heckard’s death on Friday afternoon, noting the official cause and manner of his death are pending.

Heckard had been in treatment for drug abuse and although the manner of his death is still pending, police are saying it looks like a drug overdose.

The city had just paid Heckard $150,000 to dismiss the suit against the mayor—which was put in a trust by his attorney to make sure he wouldn’t spend the money too quickly—but the damage against the mayor had already been done. Months after Heckard’s lawsuit, Murray was forced to resign.

Delvonn Heckard speaks on video to the issue of Mayor Murray remaining in office. pic.twitter.com/9bRtyMwcdA

As the Free Thought Project reported in April of last year, Murray’s attorney publicly denounced the allegations of sexual abuse from the victims. One of those victims was Jeff Simpson, whose case prompted the controversy in 2008.

“The previous accusers were investigated by law enforcement and the press and found to be not credible and their claims meritless,” attorney Robert Sulkin told reporters in April.

However, these claims were easily made because the Oregon Department of Human Services’ (DHS) foster-parent records of his abuse were said to be destroyed. The mayor himself even felt secure enough to say last year that the press not finding the supposed records of his abuse of Simpson demonstrated his innocence — a move he came to regret.

Not content with hearing that the records had been destroyed, the Times tried, once again, to obtain them. Using Murray’s statements urging the media to pursue those records and noting the victim’s authorization to release the details of the abuse, DHS finally released the information.

“We used our discretion to determine disclosure was in the public interest to protect other children and prevent anyone else from being put in a similar situation,” said Caroline Burnell, manager of the legal unit for DHS’ public-affairs office. “A person in a position of power and authority could use that authority to coerce or otherwise force people into a vulnerable position.”

As the Seattle Times reports:

The Times emailed a video link of the news conference to DHS two days later, noting those statements. The agency considered the totality of information provided when deciding to release the records, Burnell said. They included the Child Protective Services assessment finding Simpson’s allegations valid; a detective’s reports citing two additional witnesses; and a letter from the District Attorney’s Office indicating prosecutors had not determined Simpson was lying.

The records, dating back to 1984, explicitly noted that Ed Murray should “never again be utilized as a certified CSD resource for children.” It also showed that a criminal case was brought against Murray by prosecutors but in spite of the multiple accusations, charges were somehow never filed.

Speaking in an interview this week with KPTV, Simpson noted that he would take a lie detector and do whatever it takes to make sure other children don’t suffer the same fate as he did.

“Mayor Murray is a child molester,” Simpson said at the time. “The worst things that you can think of were what Ed has done to me.”

As KPTV reported, Simpson said he was told by state agencies over and over that the records in his case had long been destroyed. Learning they not only existed but were released publicly, he said was an answer to his prayers.

“It’s nothing short of a miracle,” he said. “All of a sudden, not only do we get the paperwork but we get all of the records that were supposedly destroyed.”

The records vindicating Simpson’s claims are just the beginning. It now gives the accusations of the other potential victims merit as well.

Sadly, as this alleged abuse happened over 30 years ago, the statute of limitations for criminal charges has since run out. But Simpson just wants closure.

Simpson notes that he is now working with an attorney to help achieve this closure and has started a fundraising page for those efforts.

While Murray resigned last year to avoid the limelight, it is important to note just how common pedophilia is — especially among the elite — who are rarely ever held accountable.

As TFTP reported last year, Ed Murray is only one name on a long list of mayors accused of child sex-related crimes since 2016.