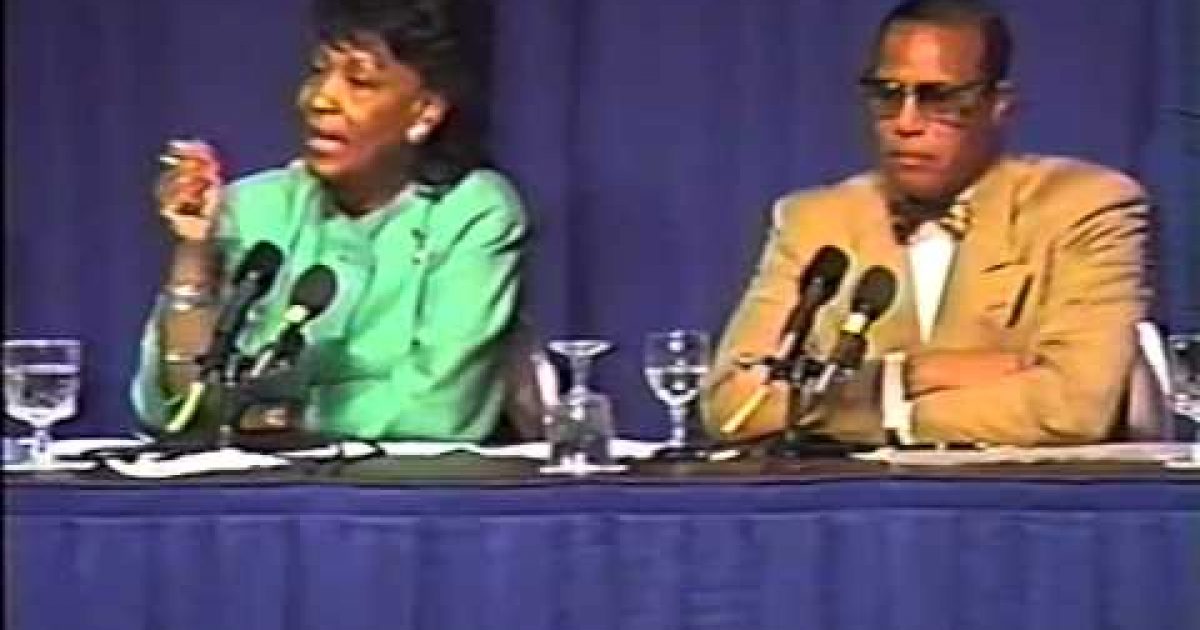 Once again, we unearth just how criminally-minded Rep. Maxine Waters (D-CA) actually is, even before she went off the rails following President Donald Trump’s winning of the White House.

The same woman that uttered, “Over the last year, and due to the focus of House Republicans on so-called ‘Muslim radicalization,’ we have seen politicians and pundits attacking the Islamic faith as a security threat to the United States,” she said. “Across the country, these people are exploiting fear and trying to convince state legislatures that the state adoption of Sharia tenants is the strategy extremists are using to transform the United States into an Islamic country.”

Yep, she basically said that if you are against Islam and Sharia, you are a bigot.

Well, prior to that, Ms. Waters attended a Nation of Islam conference in 2002 in California where Louis Farrakhan defended Palestinian suicide bombers.

“We have Maxine Waters here,” Farrakhan told the audience, “our great congresswoman from this area.”

Late in the speech, Farrakhan seemed to defend Palestinian bombers as he attacked the US supplying Israel with weapons.

“The Palestinians have nothing to defend themselves with, so they’re so exhausted and exasperated, think about that, strapping bombs to themselves, making themselves a weapon,” Farrakhan said.

“And then for the world to get upset because Iran or somebody is trying to send them some weapons. Wait a minute. If you were Jewish and you saw unarmed Jews being persecuted, wouldn’t you come to your brothers’ aid? Do you expect Muslims to see their brothers suffering like that and not come to their aid?”

Now, we can all understand that sentiment for sure.  Farrakhan said that the entire reason the Palestinians were strapping bombs to themselves was because they don’t have the military might of Israel.  Well, that is true, and personally, I question us arming and funding any nation, including Israel.  Where is that authority given in our Constitution?  I don’t see that anywhere.  I see a providing for OUR defense, not the defense of other nations.

However, people like Louis Farrakhan, a man who seems to absolutely hate white people and wants to hunt them down and murder them, are the kinds of people that Rep. Maxine Waters likes to hang around with.

Of course, Waters is not the only person who has showed up in the Farrakhan entourage.  This year, a photo was unearthed from 2005 that showed Barack Hussein Obama Soetoro Soebarkah in a smiling photo with Farrakhan, a photo that was kept from the public before his presidential campaign and re-election.

The photo that never saw the light of day: Obama with Farrakhan in 2005 https://t.co/nUrPbYVy0q pic.twitter.com/MrjqRdJy9G

The Daily Caller also points out that Muslim Rep. Keith Ellison (D-MN) was also quite chummy with Farrakhan.

The clearest ties between Democrats and the Nation of Islam run through Minnesota Rep. Keith Ellison, the deputy chair of the Democratic National Committee.

But Ellison’s ties with Farrakhan continued while in Congress. Ellison attended at least three meetings with the hate group leader since taking office, according to photos, videos and witness accounts reviewed by TheDC.

One of those meetings was a visit with Democratic Indiana Rep. Andre Carson to Farrakhan’s hotel room. Farrakhan said in Dec. 2016 that the meeting had taken place recently and that the three men had an enjoyable time together.

Ellison’s office refused to deny or confirm that the meeting took place and instead attacked the media for reporting on it.

It’s high time the members of the Democrat Party who want to pal around from these insurrectionists and bloodthirsty people be charged and dealt with, along with those doing the inciting.