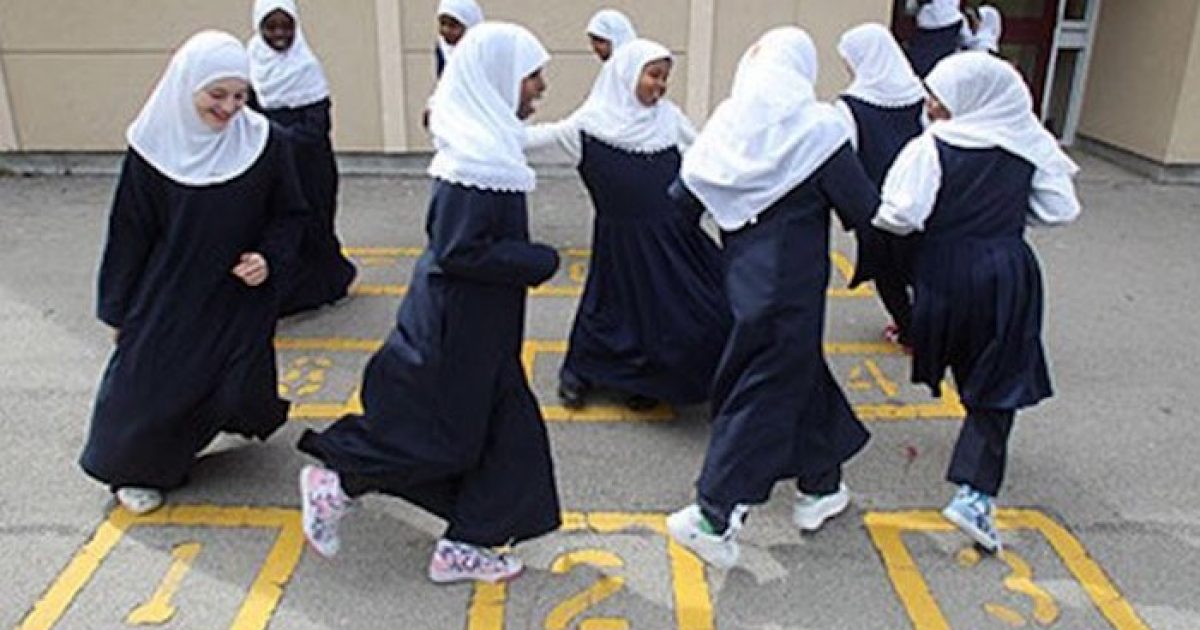 Sir Michael Wilshaw was asked if a fear of being politically incorrect was stopping the Government from developing a national policy on hijabs in schools, and he said: “Yes absolutely. There is a reticence, and it’s leaving headteachers alone, isolated and vulnerable.”

This is a nation that has sacrificed thousands of its young girls to the fear of being “racist” and “Islamophobic.”

It has brought its present dilemmas and troubles upon itself.

Amanda Spielman said some religious fundamentalists want to “actively pervert the purpose of education … and in the worst cases indoctrinate impressionable minds with extremist ideology.”

In reality, no Christian fundamentalists are doing this, and you know that.

Only Sharia-observant Muslims are doing it.

Your fear to name them makes you part of the problem, and illustrates why Britain will never solve this problem.

If British authorities cannot even name those who are causing the trouble, they will never dare to confront them.

The Government is too politically correct to enforce rules on hijabs in schools, leaving teachers “alone, isolated and vulnerable”, the former head of Ofsted has warned.

Sir Michael Wilshaw said a lack of formal policy from the Department for Education on whether children should be allowed to cover their heads in lessons has led to angry clashes.

He also highlighted concerns that there are 150 schools around the country which make it compulsory for children to wear hijabs, adding that “the country has enormously changed” and some communities hold very conservative views which cannot easily be challenged.

It follows a public outcry after a primary school in east London announced it was banning children from wearing hijabs but was forced to reverse the decision after complaints from parents.

Speaking to BBC Radio 5 Live yesterday Sir Michael said: ” There’s something like 150 schools…. which in short make it compulsory for youngsters to wear a hijab – so what’s happening about those schools?

“The country has enormously changed. When heads want to change things, they have now to take into account deep-seated and sincere feeling of communities, some of whom who have conservative views.

“The Government needs to step in. It can no longer say it’s up to the headteachers. That head might be faced with an opposition which says, well hang on, you made this decision, but there’s a school half a mile away which does allow [wearing hijabs for primary aged children].”

Asked if a fear of being politically incorrect was stopping the Government from developing a national policy on hijabs in schools, he said: “Yes absolutely. There is a reticence, and it’s leaving headteachers alone, isolated and vulnerable.”

Currently schools are expected to set their own policy on uniform, but critics have warned some feel unable to do so because of strong held views about religious attire, and have called on ministers to help by setting national guidance.

The Government is expected to come under further pressure to publish formal guidance on hijabs later this month, after the education select committee said it would hear evidence from the current chief inspector of schools about the issue.

Amanda Spielman will be questioned by MPs after she backed the Newham school’s decision.

Earlier this month she said some religious fundamentalists want to “actively pervert the purpose of education … and in the worst cases indoctrinate impressionable minds with extremist ideology”….