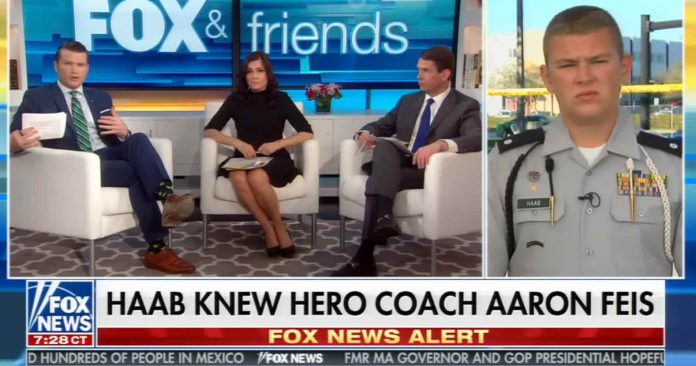 Parkland, Florida – Football Coach Aaron Feis was one of the first victims whose name was publicly announced in the shooting that killed 17 people, and as students tell stories of how he turned himself into a human shield in order to save them, one student is arguing that if the coach was armed, he could have stopped the shooter.

Feis is remembered as someone who “died the same way he lived—he put himself second,” after he reportedly sacrificed himself in order to shield three students from a hail of bullets.

Colton Haab, 17, a student at Stoneman Douglas High School who witnessed the shooting, has argued that if Feis was allowed to have his gun on campus, he could have taken down the shooter. In an interview with Fox News, Haab said:

“I believe if we did bring firearms on campus to teachers that are willing to carry their firearm on school campuses—and they got their correct training for it—I think that would be a big beneficial factor for school safety. Because if Coach Feis had had his firearm in school that day, I believe that he most likely could’ve stopped the threat.”

Haab is a member of the school’s Junior Reserve Officers’ Training Corps, and he said that as soon as he heard gunshots ring out, he jumped into action and ushered as many as 70 students into a room whether they used bulletproof Kevlar mats from the ROTC’s marksmanship program as shields, in case they were discovered by the shooter.

“We lined [the students] up into the wall and along the back of the wall…and from there I was standing with my first sergeant and I said, ‘these are kevlar, these are bulletproof material,’” Haab said. “We started moving the kevlar sheets forward.”

Haab’s assertion that Feis could have taken down the shooter if he had been armed, is an argument that has been made by a number of people when looking at how to prevent mass shootings in the future.

Judge Andrew Napolitano argued that it is impossible to keep all mentally unstable individuals from having access to firearms—but it is possible to train teachers and faculty members to be prepared for a deadly threat.

“You can’t keep a lunatic from wanting to kill somebody, and you can’t keep a person from wanting to get a gun, who is determined to get one no matter what laws you write,” Napolitano said. “The only way to stop this is by superior firepower. These things always end when the police arrive and either shoot or threaten to shoot. That should happen sooner rather than later.”

There are a number of public schools in the United States that allow teachers to carry concealed weapons, based on the belief that replacing “gun-free” zones with warnings of armed personnel, will serve as a much stronger deterrent to intruders.

The Harold Independent School District in Texas was one of the first in the country to allow concealed carry, and Superintendent David Thweatt told KFDX News that not only are the weapons concealed, but the faculty members who carry them are approved by the school board, they receive additional training, and their identities are not made public.

“They keep it on them at all times,” Thweatt said. “Folks who come in, if they are coming in to do something like just happened, then they don’t know where they are going to meet resistance and that is very critical to our plan. So, it’s very simple, train the individuals and keep them here. Make sure people know that is exactly what we will do to answer an intruder.”