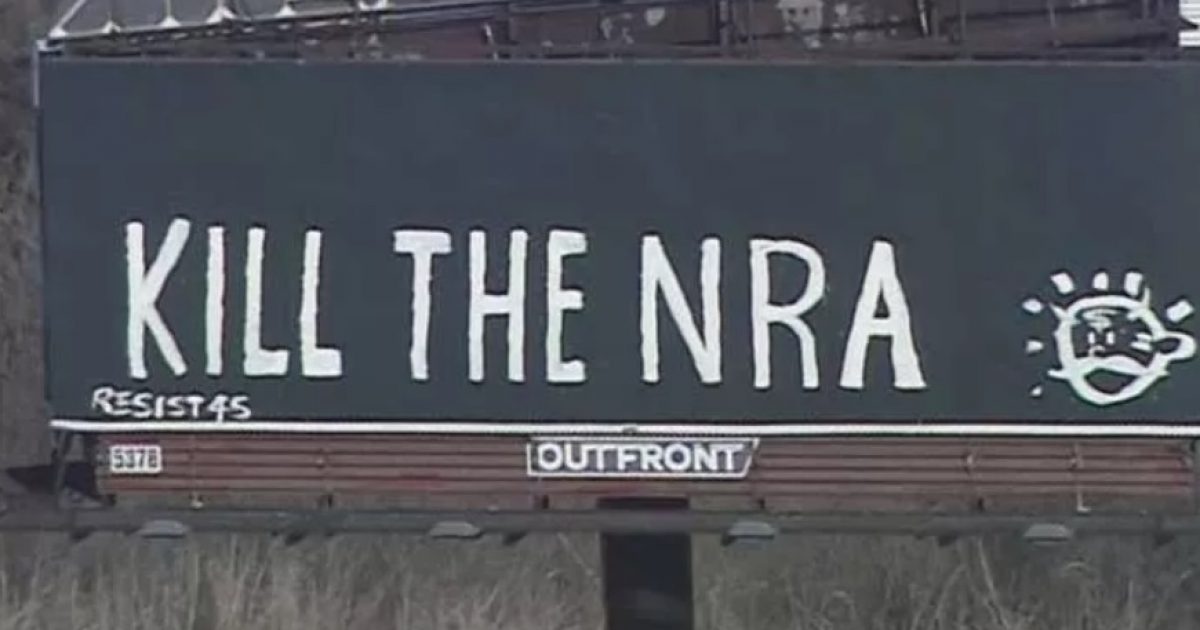 In an apparent response to the shooting at the school in Florida last week, someone from the “Resist 45” movement apparently, engaged in an act of vandalism by painting “Kill the NRA” on a billboard on I-65.

Outfront Media, the company that owns the billboard, says it was an act of vandalism.

A spokeswoman for Outfront Media confirmed the sign was not part of an advertising buy. The vandalism has been on the sign since at least Friday, when it was brought to our attention by a viewer.

This particular sign is near the Fern Valley Road exit on I-65 North.

The company told us they are working to take the controversial message down. However, when Air 3 flew past the sign Monday around 5 p.m., no workers were present.

The irony of those opposing gun owners who support the law by calling for their murder is absolutely amazing, but this is not the first time that these little Communist-types of people have called for the murder of those in the National Rifle Association.

Following the Sandy Hook shooting, there was a large outcry on social media to murder of the National Rifle Association President David Keene, along with NRA members.

Just last week, the Facebook group called ‘Milkshakes Against the Republican Party’ openly called for the murder of Republicans in response to the shooting.

One post read, “Dear Crazed Shooters, The GOP has frequent baseball practice.  You really wanna be remembered, that’s how you do it.  Signed, Americans tired of politicians bathing in the blood of the innocent for a few million dollars from the terrorist organization NRA.”

While I’m not a huge fan of the NRA because of their compromises over the past decades that have allowed for the infringement of our rights, I don’t believe one NRA member has been guilty of a mass shooting.  I don’t see them as a terrorist organization, but this person that posted is sure a terrorist, as they are inciting people to murder for a political cause.

Another post read, “You remember the shooting at the Republican baseball game?  One of those should happen EVERY WEEK until those NRA-funded sons of bitches do something about this.”

Well, that’s nice.  That’s a logical approach, don’t you think?  You see people murdered and you cry injustice, but then you call for people to actually be murdered who had nothing to do with the crime.  Hypocrites!

Apparently, the content was finally taken down by Facebook, but it apparently took them more than 48 hours to do so.

The very people calling for the murder of Republicans and NRA members are the very criminals who would have guns if they push to pass unconstitutional gun legislation further.  Stop, and think about that for just a minute.

Now, that you’ve thought about it, arm yourself and determine that we will not tolerate further infringements of any kind on our right to keep and bear arms.