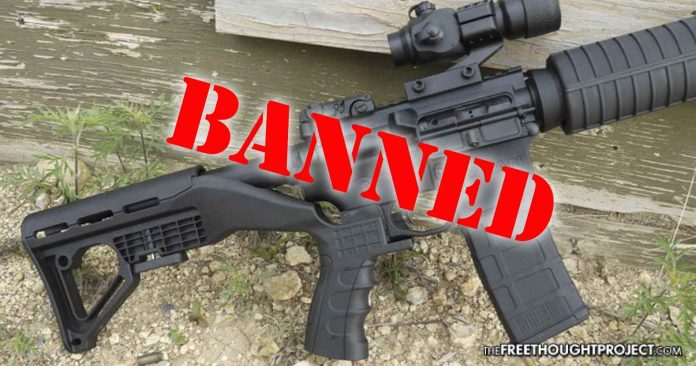 Massachusetts became the first state to ban bump-stocks for firearms, and after three weeks with the new law in effect, police are apparently shocked that only a few citizens have come forward to voluntarily give up their newly illegal devices.

Bump stocks, which replace a rifle’s standard stock and allow the gun to mimic an automatic weapon, came under fire in October after police claimed that the suspected gunman in the Las Vegas shooting, Stephen Paddock, had 12 rifles with bump stocks in his hotel room.

While it is not clear whether the bump stocks were used, or how they contributed to the carnage that resulted from the shooting, they became the focus of the mainstream media’s wrath, and Massachusetts jumped into action. Now, residents who violate the new law could spend anywhere from 18 months to life in prison.

The ban took place in the state on Feb. 1, and the new regulations gave residents the option to turn their bump stocks over to law enforcement with no repercussions—but so far, police departments in Springfield, West Springfield, Holyoke, Agawam, Granby and Ludlow have received zero bump stocks.

The Chicopee Police Department has received four bump stocks, and Officer Mike Wilk told 22News that he was actually shocked by the low response. “Four is surprising. I figured we would get a few more, but at least we got four,” Wilk said.

There is no incentive for residents to turn in their bump stocks, other than a pat on the back and the peace of mind that they no longer own something the state has deemed illegal. Wilk said he believes that “there are people that could transfer them out of state. If they had a second residence they could have brought them there.”

Essex Police Chief Peter Silva told CBS Boston that the one man in his city who voluntarily turned his bump stock in expressed his frustration at the fact that he paid more than $250 for the device and he was now being forced to turn it over to the police with nothing in return.

“He was a little frustrated because of the fact that he’d paid a little over $250 on this piece here, and there was no redeeming value for him on the other side to recover that money,” Silva said.

While there is no clear proof that bump stocks were responsible for the nearly 60 deaths that resulted from the Las Vegas shooting, John Rosenthal, founder of a Massachusetts-based nonprofit that advocated for the ban, told the Huffington Post that he believes bump stocks should be outlawed because, “We saw in Las Vegas the carnage, which far exceeded the carnage of any other mass shooting in U.S. history, and it made it very clear to me that there’s no purpose whatsoever for a bump stock, other than killing a lot of people very quickly.”

Rosenthal also told CBS Baltimore, “There’s no question in my mind that people won’t turn them in” if the ban became law, and clearly that was not the result.

The city of Denver, Colorado, has introduced a similar ban, which makes bump stocks illegal to sell, carry, store or possess within city limits. While residents also have the option to turn over their devices to law enforcement without repercussions, violators could be fined up to $999 and face up to 180 days in jail.

One of the main points that do not appear to have been thoroughly addressed in this debate is what happens to the bump stocks after they are turned over to police. Not only does the former owner receive no compensation, but the local police department now has a new weapon to add to its increasingly militarized arsenal. And as The Free Thought Project has reported, police in the United States have killed 450 percent more Americans than the last four decades of mass shootings—combined.