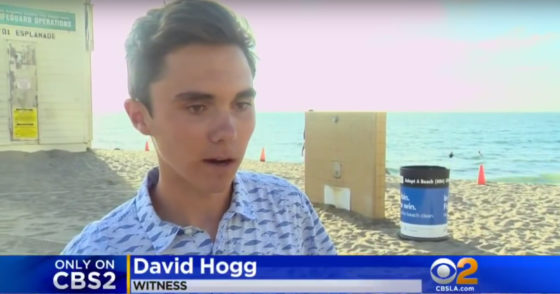 In what can only be described as outright strange, David Hogg, a survivor of the Florida mass shooting who has quickly risen to prominence as a mainstream media promoted anti-gun activist, actually appeared in a CBS Los Angeles news report six months ago!

The CBS report featured Hogg as an apparent eyewitness and videographer of a shocking confrontation between Hogg, a lifeguard, and one of Hogg’s friends who is seen being harassed by the lifeguard over a seemingly minor infraction.

Hogg is interviewed in the report and claimed that the entire issue was over his surfer friend resting a bodyboard on a beach trashcan.

Interestingly, now, just days after the horrific shooting, Hogg has “reconnected” with CBS for an anti-gun piece in which the survivors and the CBS reporters pushing their gun grabbing agenda took multiple smiling photos as if they were “rock stars” getting ready to do their next show.

Hogg has reconnected with CBS for an appearance on CBS This Morning as the mainstream media unabashedly features high school students as figureheads for a new anti-gun push.

A CBS employee posted a photo of Hogg with fellow teen activists and CBS reporter Gisela Perez, which was later taken down after Kristinn Taylor of The Gateway Pundit reported on the photo shoot and how strange it seemed that all parties looked so cheerful and enthusiastic in the wake of such a tragedy.

“These photos were taken over the weekend on the set of an interview taped for broadcast Monday morning,” Taylor wrote.

“This means the students were only three or four days out from surviving a massacre in their school. In just a few days they have become celebrated heroes of the anti-Trump resistance and are acting and being feted like rock stars.”

Additionally, Hogg has seemingly been coached by the mainstream media during multiple interviews, including one in which he forgets his lines and actually begins to slur.

Editor’s Note: Video removed by YouTube… here is a substitute.

The Infowars report also noted the fact that Hogg has become a sort of celebrity for the mainstream media and anti-gun left.

Hogg has become an overnight celebrity, appearing on international media outlets and television shows, vehemently calling for strict gun control, regularly slamming President Trump, and defending the FBI – of which his father is a retired agent, which many have found to be a peculiar coincidence as the FBI has come under fire for not preventing the Parkland massacre despite being warned about suspected killer Nikolas Cruz repeatedly beforehand.

To top it off, the other students featured in the CBS news piece (and founders of the #NeverAgain movement) are all openly hard-left extremists who seem to have messianic views of themselves and are only too happy to attack Donald Trump, much to the delight of Hollywood and the establishment press.

Thank you. I promise we will bring eternal sunshine to the minds of millions sending their kids to school in the morning. #MarchForOurLives #NeverAgain https://t.co/XQrfca5vHi