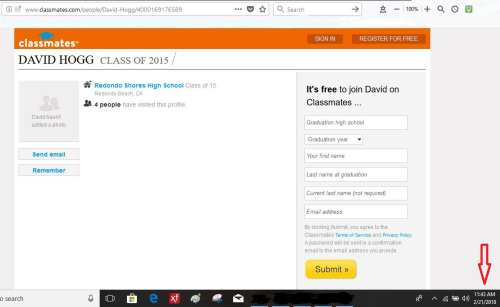 The following post originally appeared at Fellowship of the Minds

In the aftermath of the mass shooting at Marjory Stoneman Douglas High School in Parkland, metropolitan Miami, Florida, a young man named David Hogg has appeared in many TV news videos and interviews, such as this one:

This is what David Hogg claims to be:

Here’s the video Hobb took while he was hiding in a closet. So calm and so brave in the midst of a MASSACRE! — and with the presence of mind to advocate gun control!

“These are absolutely students at Stoneman Douglas. They’ve been there. I can verify that. Anything to disparage such brilliant and passionate youth who have the courage to stand up and do what they’re doing, I just think it’s outrageous and disrespectful for someone to make those allegations.”

The only problem with the above is that it was posted on Facebook that David Hogg had actually graduated more than two years ago, in 2015, from the Redondo Shores High School in Redondo, part of Greater Los Angeles, California.

And here’s confirmation that David Hogg is a 2015 graduate of Redondo Shores High School — he registered as one on Classmates.com.

Below is a screenshot I took of David Hogg’s page on Classmates.com, showing the time (11:43 am) and date (2/21/2018) when I took the screenshot, in case Classmates removes the page. The page is also archived here.

Now we know why he was interviewed in August 2017 in Redondo Beach, California, thousands of miles away from Parkland, Florida — because he lives there!

Since David Hogg had already graduated from a California high school more than two years ago, in 2015, that means:

Please contact Robert Runcie, superintendent of Broward County Schools, and ask him to produce evidence that David Hogg is registered as a student at Stoneman Douglas High School. To send him an email, click here.