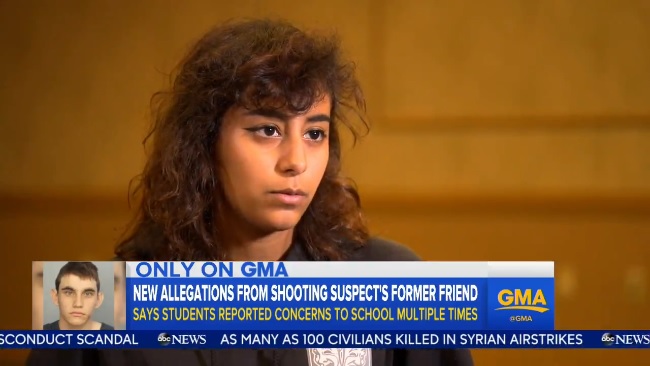 A friend of the Florida school shooting suspect told Good Morning America on Tuesday that Nikolas Cruz talked about killing people regularly and she and others warned the school repeatedly about him.

“He talked about killing our parents, our friends, boyfriends, and girlfriends,” Ariana Lopez said on ABC’s “Good Morning America.”

"He talked about killing our parents, our friends, boyfriends and girlfriends."

Former friend of Florida school shooting suspect speaks out to @VictorOquendo, saying she and her friends reported him multiple times: https://t.co/ZGimiAMj0m pic.twitter.com/gCCo4iEy4G

Lopez said that while her friendship with Cruz started out normally,  she soon noticed he would often display weapons and post disturbing pictures online.

“He used to sell knives out of his lunchbox, which I thought was insane because this is a school. He’s like, ‘hey guys, want some knives?'” she said. “He would talk about how he sympathized with Syrian terrorists, and how those who opposed him should be killed. He posted pictures of 15 or more firearms just on his bed,” she added.

What’s important is we don’t let the FBI or any of the agencies who were warned repeatedly about his behavior take the blame for this, but instead blame Donald Trump and the Bill of Rights and call for the Constitution to be burned up in the name of keeping us safe because a handful of schoolkids demanded it.