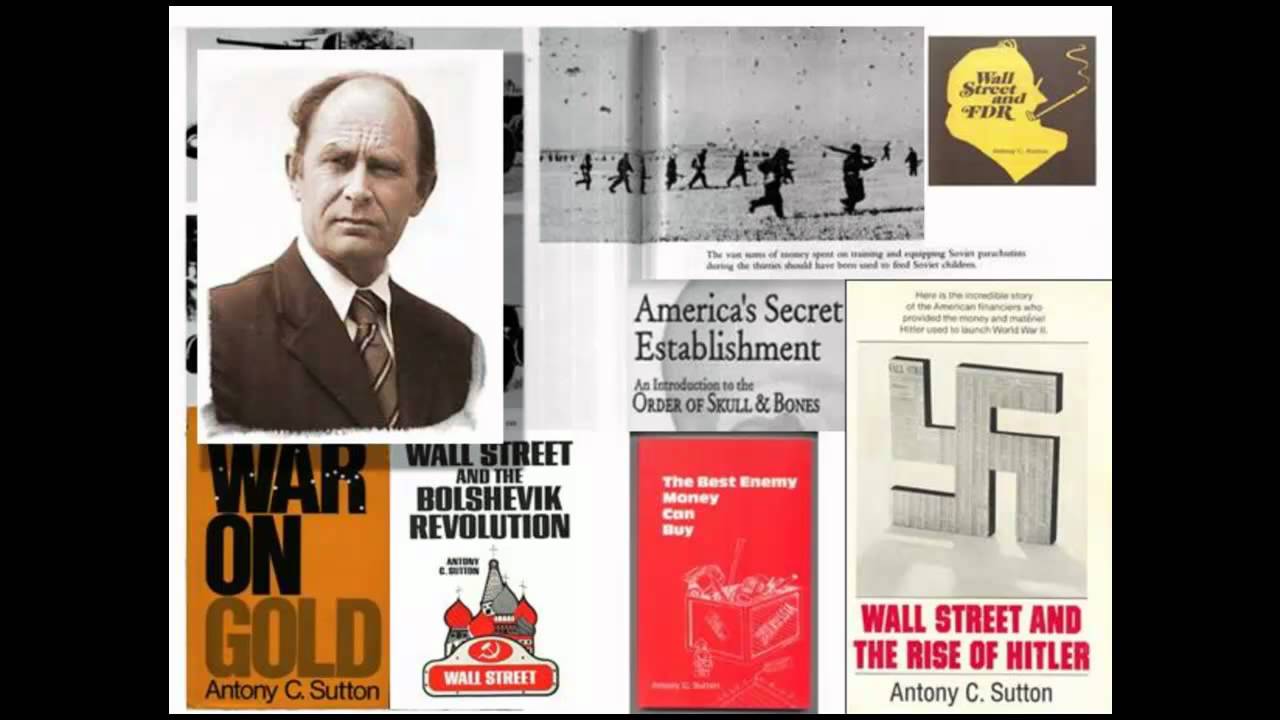 “When you see the same elites funding, encouraging, and enabling both sides in a major war, you’re on the road to understanding war from a higher perspective. These elites use war to create chaos, which they then ‘solve’ by imposing, in the aftermath, their kind of order—greater control over life, greater control over institutions of government. They call this operation ‘peace’. But it’s really the shrinking of freedom.” (The Underground, Jon Rappoport)

I recently came across a 1999 interview with Sutton, conducted by Kris Millegan, researcher and head of TrineDay publishers.

Millegan wrote about Antony Sutton in 1999: “Antony C. Sutton, 74, has been persecuted but never prosecuted for his research and subsequent publishing of his findings. His mainstream career was shattered by his devotion towards uncovering the truth. In 1968, his Western Technology and Soviet Economic Development was published by The Hoover Institute at Stanford University. Sutton showed how the Soviet state’s technological and manufacturing base, which was then engaged in supplying the North Vietnamese the armaments and supplies to kill and wound American soldiers, was built by US firms and mostly paid for by the US taxpayers. From their largest steel and iron plant, to automobile manufacturing equipment, to precision ball-bearings and computers, basically the majority of the Soviet’s large industrial enterprises had been built with the United States help or technical assistance.”

“…Then, someone sent Antony a membership list of Skull and Bones and— ‘a picture jumped out’. And what a picture! A multigenerational foreign-based secret society with fingers in all kinds of pies and roots going back to ‘Illuminati’ influences in 1830’s Germany.”

Here are excerpts from the 1999 interview:

Millegan – Can you tell the story of how you learned of Skull & Bones? And how you felt?

Sutton – I knew nothing of S&B until I received a letter in the early 80’s asking if I would like to look at a genuine membership list. For no real reason I said yes. It was agreed to send the package by Federal Express and I could keep it for 24 hours, it had to be returned to the safe. It was a “black bag” job by a family member disgusted with their activities.

For the benefit of any S&B members who may read and doubt the statement; the membership list is in two volumes, black leather bound. Living members and deceased members in separate volumes. Very handsome books.

I spent all night in Kinko’s, Santa Cruz, copied the entire volumes and returned within the 24 hour period.

I have never released any copies or identified the source. I figured each copy could be coded and enable S&B to trace the leak.

How did I feel? I felt then (as I do now} that these “prominent” men are really immature juveniles at heart. The horrible reality is that these little boys have been dominant in their influence in world affairs. No wonder we have wars and violence. Skull and Bones is the symbol of terrorist violence, pirates, the SS Deaths Head Division in WW Two, labels on poison bottles and so on.

I kept the stack of xerox sheets for quite a while before I looked at them—when I did look—a picture jumped out, THIS was a significant part of the so called establishment. No wonder the world has problems!

Millegan: – What did your study of elites, economics, secrecy and technology do for your career?

Sutton – Depends what you mean by “career”?

By conventional standards I am an abject failure. I’ve been thrown out of two major Universities (UCLA and Stanford), denied tenure at Cal State Los Angeles. Every time I write something, it appears to offend someone in the Establishment and they throw me to the wolves.

On the other hand I’ve written 26 books, published a couple of newsletters and so on…even more important I’ve never compromised on the truth. And I don’t quit.

In material terms…hopeless failure. In terms of discovery…I think I’ve been successful. Judge a man by his enemies. William Buckley called me a “jerk”. Glenn Campbell, former Director of the Hoover Institution, Stanford called me “a problem”.

Millegan – Did any of Hitler’s economic policies threaten the interests of the international bankers, and if so did that play a role in his downfall?

Sutton – Hitler’s economic policies were OK’d by the bankers right through the war…ITT, Chase, Texaco and others were operating in Nazi-held France as late as 1945. In fact Chase in Paris was trying to get [acquire] Nazi accounts as late as 1944. When we got to Germany in May 1945, I remember seeing a (bombed-out) Woolworth store in Hamburg and thinking, “What’s Woolworth doing in Nazi Germany?” While we were bombed and shelled it was “business as usual” for Big Business. Try the Alien Custodian Papers.

…Union Banking is very important. I made a documentary for Dutch National TV some years ago. It got all the way through the production process to the Dutch TV Guide…at the last minute it was pulled and another film substituted. This documentary has proof of Bush financing Hitler—documents.

Maybe my Dutch friends will still get it viewed, but the [Skull&Bones] apparatus reaches into Holland.

Sutton – Couple of years back, a Dutch TV production company from Amsterdam—under contract to Dutch National TV—came to US to make documentary on S&B [Skull and Bones]. They went to the Bones Temple and other places and interviewed people on East Coast. On West Coast, they interviewed myself and one other person.

I saw extracts from the original and it is a good professional job. They had documents linking Bush family and other S&B members to financing Hitler through Union Banking of New York and its Dutch correspondent bank. More than I have in [Sutton’s book] WALL STREET AND THE RISE OF HITLER.

The first version was later upgraded into a two part documentary and scheduled for showing this last March. It was pulled at last minute and has never been shown.

Millegan – What do you see for the future?

Suttton – Chaos, confusion and ultimately a battle between the individual and the State.

The individual is the stronger; and will win. The state is a fiction sanctified by Hegel and his followers to CONTROL the individual.

Sooner or later people will wake up. First we have to dump the trap of right and left, this is a Hegelian trap to divide and control. The battle is not between right and left; it is between us and them…

Here is a telling Antony Sutton quote from his book, The Best Enemy Money Can Buy(1986):

“By using data of Russian origin it is possible to make an accurate analysis of the origins of this equipment. It was found that all the main diesel and steam-turbine propulsion systems of the ninety-six Soviet ships on the Haiphong supply run [to the North Vietnamese] that could be identified (i.e., eighty-four out of the ninety-six) originated in design or construction outside the USSR. We can conclude, therefore, that if the [US] State and Commerce Departments, in the 1950s and 1960s, had consistently enforced the legislation passed by Congress in 1949, the Soviets would not have had the ability to supply the Vietnamese War – and 50,000 more Americans and countless Vietnamese would be alive today.”

“Who were the government officials responsible for this transfer of known military technology? The concept originally came from National Security Adviser Henry Kissinger, who reportedly sold President Nixon on the idea that giving military technology to the Soviets would temper their global territorial ambitions. How Henry arrived at this gigantic non sequitur is not known. Sufficient to state that he aroused considerable concern over his motivations. Not least that Henry had been a paid family employee of the Rockefellers since 1958 and has served as International Advisory Committee Chairman of the Chase Manhattan Bank, a Rockefeller concern.”

If you think such traitorous actions could never have occurred, I point you to another researcher, Charles Higham, and his 1983 classic, Trading with the Enemy.

Higham focuses on World War 2. The men behind the curtain Higham exposed are in the same basic group that Antony Sutton exposed.

Higham, Trading with the Enemy:

“What would have happened if millions of American and British people, struggling with coupons and lines at the gas stations, had learned that in 1942 Standard Oil of New Jersey [part of the Rockefeller empire] managers shipped the enemy’s [Germany’s] fuel through neutral Switzerland and that the enemy was shipping Allied fuel? Suppose the public had discovered that the Chase Bank in Nazi-occupied Paris after Pearl Harbor was doing millions of dollars’ worth of business with the enemy with the full knowledge of the head office in Manhattan [the Rockefeller family among others?] Or that Ford trucks were being built for the German occupation troops in France with authorization from Dearborn, Michigan? Or that Colonel Sosthenes Behn, the head of the international American telephone conglomerate ITT, flew from New York to Madrid to Berne during the war to help improve Hitler’s communications systems and improve the robot bombs that devastated London? Or that ITT built the FockeWulfs that dropped bombs on British and American troops? Or that crucial ball bearings were shipped to Nazi-associated customers in Latin America with the collusion of the vice-chairman of the U.S. War Production Board in partnership with Goering’s cousin in Philadelphia when American forces were desperately short of them? Or that such arrangements were known about in Washington and either sanctioned or deliberately ignored?”

Freedom is demeaned; and dominance by the few over the many is hailed as peace in our time.