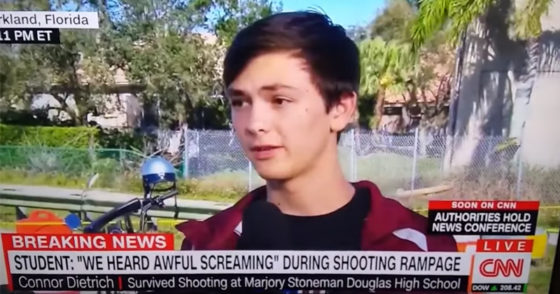 Students were told to prepare for a “shooting drill” with police firing blanks to scare them right before the actual shooting happened, says a student who survived the Marjory Stoneman Douglas shooting.

Connor Dietrich told CNN that officials told him and fellow students that, prior to the shooting that killed 17, police would be firing blanks for a live drill.

When asked if he heard shots ring out, Dietrich responded, “Yeah we did hear shots.”

“And did you think instantly, ‘Oh my god those are gunshots,’ or did you think it was balloons popping, as one student told me? How would you know what it would sound like?” asked the interviewer.

“I thought it was a drill because they told us we’d have police officers who were gonna be firing blanks, to scare us and get us, like, trained for this,” Dietrich replied.

“So no one took it seriously until I heard like, screaming – it was the worst screaming I’ll ever hear – it was awful.”

Other video corroborates Dietrich’s testimony of a live drill before the shooting.

“At first you thought it was just the drill,” asked NBC’s Kerry Sanders.

“I thought it might be the drill, and I went to shut the blinds, and then I turned to say ‘turn the lights off,’ and when I turned I saw my student and he was bleeding,” said English teacher Dara Hass.

In another video, the father of student said his sons told him they had a fire drill and were supposed to have a shooting drill.

#FloridaHighSchool
Father reports student told him they had a fire drill and were supposed to have an active shooter drill. pic.twitter.com/WRKsyj7FPu

“Today they had a fire drill, and both saw a gun-armed drill was supposed to be today, and supposedly the shooter is a kid,” said Caesar Figueroa.

And in another video, students Isabella Gomez and her Spanish teacher Alicia Blonde explained to MSNBC they thought a drill was happening when they heard the shots.

“The fire alarm went off, we thought nothing of it, I just thought ‘wow this is really late fire drill.’