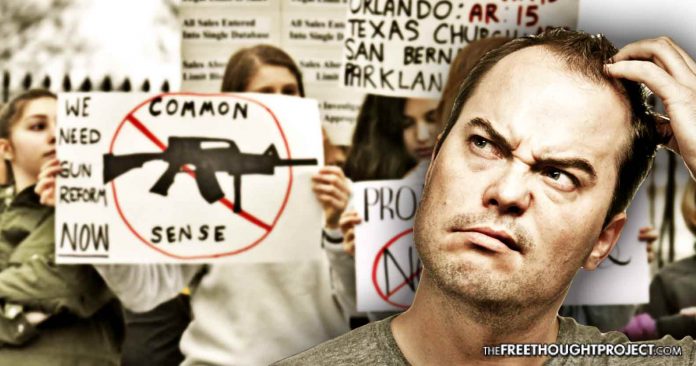 Several of the surviving students from Marjory Stoneman Douglas High School in Parkland, Florida, have turned into gun control advocates in the last week. But while they were quick to protest against the inanimate object that was reportedly used to kill 17 students and teachers, they seem to be ignorant of the fact that the FBI ignored multiple reports and the local police department ignored dozens of calls about death threats from the suspect.

More than 100 students from Parkland visited the Florida State capitol exactly one week after the shooting to participate in the “Rally to Support Gun Safety Reform,” in an attempt to call on lawmakers to enact stricter gun control. Students David Hogg and Emma Gonzalez have also gained mainstream media fame by speaking out in a number of interviews and referring to members of the National Rifle Association as “Child murderers.”

However, despite all of the rage that was channeled towards the inanimate object used by suspect Nikolas Cruz, the student activists are missing a few major pieces of the puzzle that could have prevented the massacre.

Less than six weeks before the shooting, someone the FBI described as “a person close to” Cruz reached out to the agency and desperately pleaded for their help. The person reported Cruz’s “gun ownership, desire to kill people, erratic behavior, and disturbing social media posts, as well as the potential of him conducting a school shooting.”

Instead of investigating the tip, the FBI has admitted that its agents failed to “follow protocols,” and did not follow up. But this was not the first time the FBI received reports of Cruz’s violent threats.

In September 2017, Cruz left a comment on a YouTube video that said, “I’m going to be a professional school shooter.” The user who uploaded the video immediately took a screenshot of the comment and submitted it to the FBI. While agents from a local field officer were quick to respond and followed up with an in-person interview, they never fully followed through with an investigation into Nikolas Cruz.

Cruz also left comments on YouTube videos claiming that he was “going to kill law enforcement one day,” which should have added to the red flags that would have led to an investigation.

In addition to the FBI’s failure to do the one job that would have made its agents look like the heroes the mainstream media has attempted to portray them as in the past, the local police department also failed to act on a number of reports.

In fact, Broward County Sheriff Scott Israel admitted that there were at least “20 calls for services in the last few years” regarding Cruz. Multiple students who were former classmates of the accused killer said that he threatened to kill them over social media and they reported the threats to the school and to local law enforcement.

Given all of the clear warning signs over a period of years, and the fact that the state of Florida has the Baker Act, which allows law enforcement to force the involuntary institutionalization and examination of an individual for up to 72 hours if they believe that the individual may cause harm to others or to themselves, it is shocking that they are not receiving more criticism for their failure to act.

It is no surprise that a number of students would want to stand up for what they believe in and to speak out after their school was attacked—but why does every vocal student from Parkland seem to be adamantly in support of protesting against the weapon that was used to attack their school, while they ignore all of the FBI agents and police officers who failed to “protect and serve” them in their time of need?