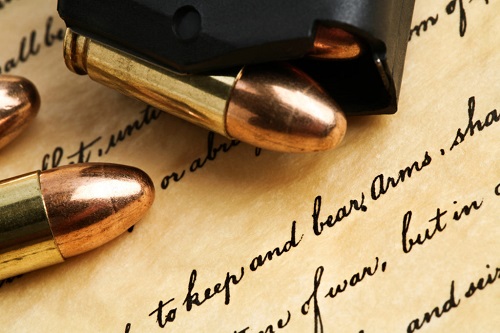 Though the media often attempts to twist the gun rights debate into a web of complexity, gun rights is in fact a rather simple issue — either you believe that people have an inherent right to self defense, or you don’t. All other arguments are a peripheral distraction.

Firearms are a powerful epoch changing development. Not because they necessarily make killing “easier;” killing was always easy for certain groups of people throughout history, including governments and organized thugs. Instead, guns changed the world because for the first time in thousands of years the common man or woman could realistically stop a more powerful and more skilled attacker. Firearms are a miraculous equalizer in a world otherwise dominated and enslaved by everyday psychopaths.

The Founding Fathers understood this dynamic very well. Despite arguments from the extreme left falsely insinuating that the founders are essentially barbarians from a defunct era that were too stupid to understand future developments and technology, the fact is that they knew the core philosophical justification for an armed citizenry was always the most important matter at hand. Today’s debates try to muddle meaningful discourse by swamping the public in the minutia of background checks, etc. But the following quotes from the early days of the Republic outline what we should all really be talking about:

“The laws that forbid the carrying of arms are laws of such a nature. They disarm only those who are neither inclined nor determined to commit crimes…. Such laws make things worse for the assaulted and better for the assailants; they serve rather to encourage than to prevent homicides, for an unarmed man may be attacked with greater confidence than an armed man.”
– Thomas Jefferson, Commonplace Book (quoting 18th century criminologist Cesare Beccaria), 1774-1776

“To disarm the people…[i]s the most effectual way to enslave them.”
– George Mason, referencing advice given to the British Parliament by Pennsylvania governor Sir William Keith, The Debates in the Several State Conventions on the Adoption of the Federal Constitution, June 14, 1788

“Before a standing army can rule, the people must be disarmed, as they are in almost every country in Europe. The supreme power in America cannot enforce unjust laws by the sword; because the whole body of the people are armed, and constitute a force superior to any band of regular troops.”
– Noah Webster, An Examination of the Leading Principles of the Federal Constitution, October 10, 1787

“Guard with jealous attention the public liberty. Suspect everyone who approaches that jewel. Unfortunately, nothing will preserve it but downright force. Whenever you give up that force, you are ruined…. The great object is that every man be armed. Everyone who is able might have a gun.”
– Patrick Henry, Speech to the Virginia Ratifying Convention, June 5, 1778

“The right of the citizens to keep and bear arms has justly been considered, as the palladium of the liberties of a republic; since it offers a strong moral check against the usurpation and arbitrary power of rulers; and will generally, even if these are successful in the first instance, enable the people to resist and triumph over them.”
– Joseph Story, Commentaries on the Constitution of the United States, 1833

“On every occasion [of Constitutional interpretation] let us carry ourselves back to the time when the Constitution was adopted, recollect the spirit manifested in the debates, and instead of trying [to force] what meaning may be squeezed out of the text, or invented against it, [instead let us] conform to the probable one in which it was passed.”
– Thomas Jefferson, letter to William Johnson, 12 June 1823

The inborn right to self defense and the ability of the people to maintain individual liberties in the face of tyranny supersedes all other arguments on gun rights. In fact, nothing else matters. This key point is so unassailable that anti-gun lobbyists have in most cases given up trying to defeat it. Instead of trying to confiscate firearms outright (which is their ultimate goal), they attempt to chip away at gun rights a piece at a time through endless flurries of legislation. This legislation is usually implemented in the wake of a tragedy involving firearms, for gun grabbers never let a good crisis go to waste. Exploiting the deaths of innocent people to further an ideological agenda is a common strategy for them.

This leads us to the recent mass shooting at a high school in Parkland, Florida. The narrative being constructed around this event is the same as usual — that stronger “gun control and background checks” are needed to prevent such things from ever happening again.

Of course, Nikolas Cruz, the alleged perpetrator of the shooting, obtained his firearms legally and by passing existing background checks. Being that these background checks have been highly effective in stopping the vast majority of potential criminals from purchasing firearms through legal channels, one wonders what more can be done to make these checks somehow “foolproof.”

Around 1.5 million 4473 forms (background checks) have been rejected by the ATF in the two decades since more stringent background checks were instituted. As many as 160,000 forms are denied each year for multiple reasons, including mental health reasons.

So, the question is, did background checks fail in the case of Nikolas Cruz? And would any suggested amendments to current 4473 methods have made any difference whatsoever in stopping Cruz from purchasing a weapon? The answer is no. No suggested changes to ATF background checks would have made a difference. But there are stop-gaps to preventing mass shootings other than the ATF.

The FBI, for example, had been warned on multiple occasions about Cruz, including his open threats to commit a school shooting. Yet, the FBI did nothing.

Could the FBI have prevented the killings in Parkland by following up repeated warnings on Nikolas Cruz? I would say yes, it is possible they could have investigated Cruz’s threats, verified them and prosecuted for conspiracy to commit a violent crime, or at the very least, they could have frightened him away from the idea.

They aren’t interested in instituting changes at the FBI because this could help solve the problem, and they do not care about solving the problem, they only care about pursuing their ultimate goal of deconstructing the 2nd Amendment for all time.

Gun control advocates will conjure up a host of arguments for diminishing gun rights, but just like the background check issue and Nikolas Cruz, most of them are nonsensical.

They’ll make the claim that guns for self defense are fine, but that high capacity military grade weapons were never protected under the Constitution. “The founding fathers were talking about single shot muskets when they wrote that…” is the commonly regurgitated propaganda meme. This is false. High capacity “machine guns” (like the Puckle gun and the Girandoni rifle) and even artillery were actually common during the time of the founders and were indeed protected under the 2nd Amendment. In fact, the 2nd Amendment applies to all firearms under common military usage regardless of the era.

They’ll claim that high capacity “assault weapons” are not needed and that low capacity firearms are more practical for self defense. They obviously are ignoring the circumstances surrounding any given self defense scenario. What if you are facing off with multiple assailants? What if those assailants are mass shooters themselves and obtained their weapons on the black market as the ISIS terrorists in Paris did in 2015? What if the assailant is a tyrannical government? Who is to say what capacity is “practical” in those situations?

They’ll claim that tougher gun laws and even confiscation will prevent mass shootings in the future, yet multiple nations (including France) have suffered horrific mass shootings despite having far more Orwellian gun laws than the U.S.

Criminals and terrorists do not follow laws. Laws are words on paper backed up by perceived consequences that only law abiding people care about.  The vast majority of successful mass shootings take place in “gun free zones,” places where average law abiding citizens are left unarmed and easy prey.

So, what is the solution that gun grabbers don’t want to talk about? What could have stopped the shooting in Parkland? What is the one thing that the mainstream media actively seeks to avoid any dialogue about?

The solution is simple — abolish all gun free zones. If teachers at the high school in Parkland had been armed the day Nikolas Cruz showed up with the intent to murder, then the entire event could have gone far differently. Instead of acting helplessly as human shields against a spray of bullets, teachers and coaches could have been shooting back, actually stopping the threat instead of just slowing it down for a few seconds. Or, knowing that he might be immediately shot and killed before accomplishing his attack, Cruz may have abandoned the attempt altogether. There is no way to calculate how many crimes and mass shootings have been prevented exactly because private gun ownership acted as a deterrent.

Most gun grabbers are oblivious to this kind of logic because they are blinded by ideological biases. Some of them, however, understand the truth of this completely, and they don’t care. They are not in the business of saving lives; they are in the business of exploiting death. They want something entirely different from what they claim they want. They are not interested in life, they are interested in control.