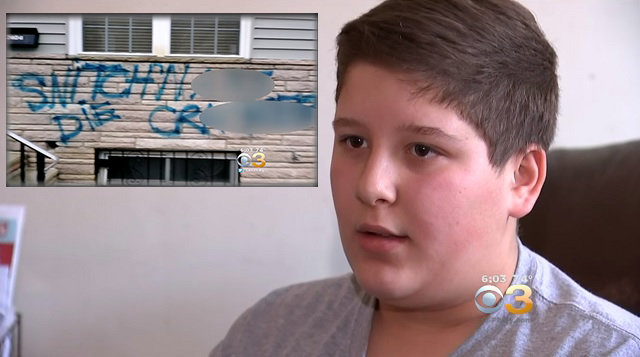 A first honors student living in South Philadelphia is being subjected to a racial terror campaign by “gang members” at his school for being white, CBS Philly reports.

According to police, Joey Messina, 12, was jumped at school in a “6-on-1 school hallway attack” just three weeks ago.

Wednesday morning, his family woke up to the words “DIE SNITCH’N A** CRACKER spray-painted on the front of his home which police are investigating as a potential case of “ethnic intimidation.”

#ONLYON3 – A 12-year-old, bullied at school, wakes up to this hateful graffiti across the front of his South Phila. home. Police have opened an investigation to determine if this is ethnic intimidation. At 6 on #CBS3 @CBSPhilly pic.twitter.com/e5r5C6ZKjh

To add insult to injury, after Joey’s father Joe Messina complained to the school he was banned from their campus for his “pattern of behavior.”

Overnight, this seventh-grader’s schoolyard differences followed him home, spray-painted for all to see on his South Philadelphia home where he lives with his parents and two younger siblings.

“I turned around and just went, ‘Oh my God.’ I called him and said, ‘Hurry up, get out here and look at this,’” Margaux Messina, Joey’s mom, said.

“He walked outside and saw that, he came right in, said, ‘Dad, I am scared now,’” said Joey’s dad, Joe Messina.

Joey’s mom and dad say their son was targeted because of his race. The family is white.

…The Messinas accuse staff at Mastery Charter Thomas Campus of looking the other way.

“They let them run that school. It’s a shame to say, they really do,” Margaux Messina said. “They don’t care about the gangs in there, they deny that when there really is.”

The school claimed they have a “a zero-tolerance policy for bullying and investigate all allegations thoroughly and expeditiously.”

CBS Philly says they added, “Joe Messina, the father, ‘is no longer allowed on campus because of a pattern of behavior.'”

“They declined to provide further details.”

I reported on another similar case two years ago in Kansas City where a 12-year-old girl was attacked so much at her majority-minority school that her mother said she “doesn’t want to be white anymore.”

The US Census bureau estimates that white people will become a minority in America by the year 2044. According to Democratic presidential favorite Joe Biden, this is “a source of our strength.”