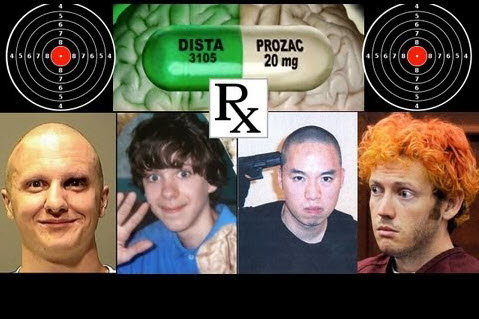 I’ve been tracking the connection since 1999, when I wrote a long white paper, for the Truth Seeker Foundation, on school shootings and psychiatric drugs. The paper was titled: “Why Do They Do It? School shootings Across America.”

The drugs aren’t the only causative factor, but they produce what I call the Johnny Appleseed effect throughout society. Sprinkle enough of the drugs among enough people and you get otherwise unexplainable violence popping up—in schools, in workplaces. The psychiatric plague eats out the country from the inside.

Here are excerpts from my 1999 report—

The massacre at Columbine High School took place on April 20, 1999. Astonishingly, for eight days after the tragedy, during thousands of hours of prime-time television coverage, virtually no one mentioned the word “drugs.” Then the issue was opened. Eric Harris, one of the shooters at Columbine, was on at least one drug.

The NY Times of April 29, 1999, and other papers reported that Harris was rejected from enlisting in the Marines for medical reasons. A friend of the family told the Times that Harris was being treated by a psychiatrist. And then several sources told the Washington Post that the drug prescribed as treatment was Luvox, manufactured by Solvay.

In two more days, the “drug-issue” was gone.

Luvox is of the same class as Prozac and Zoloft and Paxil. They are labeled SSRIs (selective serotonin reuptake inhibitors). They attempt to alleviate depression by changing brain-levels of the natural substance serotonin. Luvox has a slightly different chemical configuration from Prozac, Paxil, and Zoloft, and it was approved by the FDA for obsessive-compulsive disorder, although many doctors apparently prescribe it for depression.

Prozac is the wildly popular Eli Lilly antidepressant which has been linked to suicidal and homicidal actions. It is now given to young children. Again, its chemical composition is very close to Luvox, the drug that Harris took.

Dr. Peter Breggin, the eminent psychiatrist and author (Toxic Psychiatry, Talking Back to Prozac, Talking Back to Ritalin), told me, “With Luvox there is some evidence of a four-percent rate for mania in adolescents. Mania, for certain individuals, could be a component in grandiose plans to destroy large numbers of other people. Mania can go over the hill to psychosis.”

Dr. Joseph Tarantolo is a psychiatrist in private practice in Washington DC. He is the president of the Washington chapter of the American Society of Psychoanalytic Physicians. Tarantolo states that “all the SSRIs [including Prozac and Luvox] relieve the patient of feeling. He becomes less empathic, as in `I don’t care as much,’ which means `It’s easier for me to harm you.’ If a doctor treats someone who needs a great deal of strength just to think straight, and gives him one of these drugs, that could push him over the edge into violent behavior.”

In Arianna Huffington’s syndicated newspaper column of July 9, 1998, Dr. Breggin states, “I have no doubt that Prozac can cause or contribute to violence and suicide. I’ve seen many cases. In a recent clinical trial, 6 percent of the children became psychotic on Prozac. And manic psychosis can lead to violence.”

A study from the September 1989 Journal of Clinical Psychiatry, by Joseph Lipiniski, Jr., indicates that in five examined cases people on Prozac developed what is called akathesia. Symptoms include intense anxiety, inability to sleep, the “jerking of extremities,” and “bicycling in bed or just turning around and around.” Dr. Breggin comments that akathesia “may also contribute to the drug’s tendency to cause self-destructive or violent tendencies … Akathesia can become the equivalent of biochemical torture and could possibly tip someone over the edge into self-destructive or violent behavior … The June 1990 Health Newsletter, produced by the Public Citizen Research Group, reports, ‘Akathesia, or symptoms of restlessness, constant pacing, and purposeless movements of the feet and legs, may occur in 10-25 percent of patients on Prozac.’”

“Emergence of self-destructive phenomena in children and adolescents during fluoxetine [Prozac] treatment,” published in the Journal of the American Academy of Child and Adolescent Psychiatry (1991, vol.30), written by RA King, RA Riddle, et al. It reports self-destructive phenomena in 14% (6/42) of children and adolescents (10-17 years old) who had treatment with fluoxetine (Prozac) for obsessive-compulsive disorder.

September, 1991. The Journal of the American Academy of Child and Adolescent Psychiatry. Author Laurence Jerome reports the case of a ten-year old who moves with his family to a new location. Becoming depressed, the boy is put on Prozac by a doctor. The boy is then “hyperactive, agitated … irritable.” He makes a “somewhat grandiose assessment of his own abilities.” Then he calls a stranger on the phone and says he is going to kill him. The Prozac is stopped, and the symptoms disappear.

The well-known Goodman and Gilman’s The Pharmacological Basis of Therapeutics reveals a strange fact. It states that Ritalin [given for ADHD] is “structurally related to amphetamines … Its pharmacological properties are essentially the same as those of the amphetamines.” In other words, the only clear difference is legality. And the effects, in layman’s terms, are obvious. You take speed and, sooner or later, you start crashing. You become agitated, irritable, paranoid, delusional, aggressive.

In his book, Toxic Psychiatry, Dr. Breggin discusses the subject of drug combinations: “Combining antidepressants [e.g., Prozac, Luvox, Paxil] and psychostimulants [e.g., Ritalin] increases the risk of cardiovascular catastrophe, seizures, sedation, euphoria, and psychosis. Withdrawal from the combination can cause a severe reaction that includes confusion, emotional instability, agitation, and aggression.” Children are frequently medicated with this combination, and when we highlight such effects as aggression, psychosis, and emotional instability, it is obvious that the result is pointing toward the very real possibility of violence.

In 1986, The International Journal of the Addictions published a most important literature review by Richard Scarnati. It was titled, “An Outline of Hazardous Side Effects of Ritalin (Methylphenidate)” [v.21(7), pp. 837-841].

Scarnati listed over a hundred adverse affects of Ritalin and indexed published journal articles for each of these symptoms.

For every one of the following (selected and quoted verbatim) Ritalin effects then, there is at least one confirming source in the medical literature:

Other ADHD medications, which also have a chemical profile similar to amphetamines, would be expected to produce some of the same effects listed above.

The ICSPP (International Center for the Study of Psychiatry and Psychology) News publishes the following warning in bold letters: “Do Not Try to Abruptly Stop Taking Psychiatric Drugs. When trying to withdraw from many psychiatric drugs, patients can develop serious and even life-threatening emotional and physical reactions…Therefore, withdrawal from psychiatric drugs should be done under clinical supervision…”

There is a problem. It is chilling. Pharmaceutical companies, which manufacture drug after drug for “mental disorders,” are doing everything they can to cover up the drugs’ connection to violence.

They use their lawyers and PR people—and their influence over the press—to scrub the connection.

And now, one typical, disturbing, official reaction to every new mass shooting is: build more community mental health facilities. Obama was prominent in this regard, after Sandy Hook in 2012. The implication? More drug prescriptions for more people; thus, more violent consequences.

I’ll close with another excerpt from my 1999 report. It is the tragic account of Julie Marie Meade (one account of many you can find at ssristories.org (also here)):

Dr. Joseph Tarantolo has written about Julie Marie Meade. In a column for the ICSPP (International Center for the Study of Psychiatry and Psychology) News, “Children and Prozac: First Do No Harm,” Tarantolo describes how Julie Meade, in November of 1996, called 911, “begging the cops to come and shoot her. And if they didn’t do it quickly, she would do it to herself. There was also the threat that she would shoot them as well.”

The police came within a few minutes, “5 of them to be exact, pumping at least 10 bullets into her head and torso,” as she waved a gun around.

Tarantolo remarks that a friend of Julie said Julie “had plans to make the honor roll and go to college. He [the friend] had also observed her taking all those pills.” What pills? Tarantolo called the Baltimore medical examiner, and spoke with Dr. Martin Bullock, who was on a fellowship at that office. Bullock said, “She had been taking Prozac for four years.”

Tarantolo asked Bullock, “Did you know that Prozac has been implicated in impulsive de novo violence and suicidalness?” Bullock said he was not aware of this.

Tarantolo is careful to point out, “Violent and suicidal behavior have been observed both early (a few weeks) and late (many months) in treatment with Prozac.”

The November 23rd, 1996, Washington Post reported the Julie Meade death by police shooting. The paper mentioned nothing about Prozac.

Therefore, readers were left in the dark. What could explain this girl’s bizarre and horrendous behavior?

The answer was there in plain sight. But the Post refused to make it known.