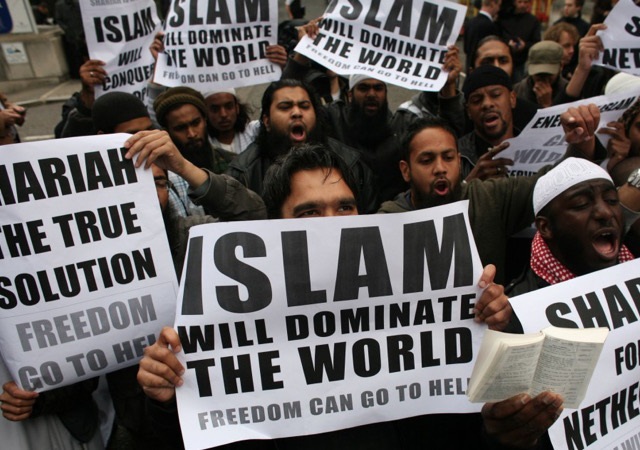 “Islam is not a religion of peace. It’s a political theory of conquest that seeks domination by any means it can.”  – Ayaan Hirsi Ali

When it comes to freedom of speech in this country, one should always recollect that no one has the right (No institution of the Church, the government, the media or individuals) to violate law in any sense of the word in what one calls freedom of speech.

“Liberty is the RIGHT to do what the law permits.” – Charles de Montesquieu

“Congress shall make no law respecting an establishment of religion (Under the Christian umbrella), or prohibiting the free exercise thereof (That which is lawful); or abridging the freedom of speech, or of the press, or the right of the people peaceably to assemble, and to petition the Government for a redress of grievances.” –First Amendment (cf 2 Corinthians 3:17; John 8:36)

Yet, there are many that have been indoctrinated to believe that whatever you say, and no matter what you say, will be without a lawful consequence (Hosea 4:6).

It is in fact, illegal to defame, to libel, to lie, or to bring about a willful and purposeful inciting of violence toward a people that do not align themselves with an unlawful agenda (Exodus 20).

Taking it head on, is it freedom of speech to teach others to be subversive toward American government? To incite domestic insurrection, terrorizing, torture or the calling forth to execute those that do not believe according to a system of “religion” and governance that is foreign to that of American law?

These 2 videos were both broadcasted in 2009.

I hear the two things in these videos that should alarm any American and move them to immediate action concerning what is taking place in our country.

They are protected by legal rights in a country they detest.

CIA operative from CNN Anderson Cooper asks, “How can they get away with this?

Answer, “They are protected under the First Amendment.”

The second report: Sean Hannity asks, “Why would the United States Government allow these facilities to stay open?”

Really? Law enforcement’s hands are tied in trying to shut these groups down?

Government of today that counters American government would have you believe that Muslims have a RIGHT to do so and that law enforcement official’s hands are tied from doing anything to stop them because they have federal and state protections.

This may explain why in America there are 35 Jihadi terror cells on American soil, a 74% jump since September 11, 2001 of Muslim Mosques (3,000) and a total of now 3.3 million Muslims in America. And do not forget about the 50 terror attacks on U.S. soil alone because they are all hiding behind what the CIA-controlled media who would have you believe it comes to freedom of speech.

This is COMPLETELY UNTRUE!

Muslims have no more rights to say and do the things that they advocate than the modernized version of the American government has in sanctioning the murder of the innocent in the womb (Proverbs 6:17).  This, in parallel, is the American government licensing abortionist “murderers” to kill babies, to the Muslims having a RIGHT to advocate the murder, torture, and terrorizing of unbelievers at will.

Keep in mind, this is the same government and its agencies telling you that a foreign enemy has a RIGHT to be on our soil and has labeled Americans as potential “Terrorists.”

The RIGHTS that God gives Americans are the RIGHTS God Law’s permits, not to do what He clearly condemns (Deuteronomy 25:1).

Certain people believe that Muslims have Federal, State and First Amendment RIGHTS backing them concerning advocating their crimes against the American people.  This is an attempt by Muslims to come into America to overthrow and establish Sharia law in place of the U.S. Constitution.

Yet, simply look to our Laws which state otherwise.

Do the Muslims advocate terror, torture, and death? Do they advocate domination? Just let them tell you…

“It is the nature of Islam to dominate, not to be dominated, to impose its law on all nations and to extend its power to the entire planet.” –Hassan al-Banna

Islam isn’t in America to be equal to any other faith, but to become dominant. The Koran is the highest authority in America, and Islam is the only accepted religion on earth.” – Omar Ahmed, The founder of the Council on America-Islamic Relations

“If we are practicing Muslims, we are above the law of the land.” Mustafa Carrol CAIR Director Houston, Texas

And your government would have you believe that they have protected RIGHTS to advocate what the Koran says against anyone and everyone that that are “unbelievers.”

“And slay them wherever you come upon them, and expel them from where they expelled you; persecution is more grievous than slaying. But fight them not by the Holy Mosque until they should fight you there; then, if they fight you, slay them — such is the recompense of unbelievers.” – Koran 2: 191

“Let not the believers take the unbelievers for friends, rather than the believers – for whoso does that belongs not to God in anything – unless you have a fear of them. God warns you that you beware of Him, and unto God is the homecoming.” – Koran 3:28

“Whoso desires another religion than Islam, it shall not be accepted of him; in the next world he shall be among the losers.” – Koran 3:85

“This is the recompense of those who fight against God and His Messenger, and hasten about the earth, to do corruption there: they shall be slaughtered, or crucified, or their hands and feet shall alternately be struck off; or they shall be banished from the land. That is a degradation for them in this world; and in the world to come awaits them a mighty chastisement…” – Koran 5:33

“I am with you; so confirm the believers. I shall cast into the unbelievers’ hearts terror; so smite above the necks, and smite every finger of them!” – Koran 8:12

“And prepare against them whatever you are able of power and of steeds of war by which you may terrify the enemy of Allah and your enemy and others besides them whom you do not know [but] whom Allah knows. And whatever you spend in the cause of Allah will be fully repaid to you, and you will not be wronged.” – Koran 8:60

“Slay the idolaters wherever you find them, and take them, and confine them, and lie in wait for them at every place of ambush.” – Koran 9:5

“O believers, fight the unbelievers who are near to you; and let them find in you harshness; and know that God is with the god-fearing.” – Koran 9:123

“But those who disbelieved will have cut out for them garments of fire. Poured upon their heads will be scalding water.” – Koran 22:19

“So when you meet those who disbelieve [in battle], strike [their] necks until, when you have inflicted slaughter upon them, then secure their bonds.” – Koran 47:4

Again, to suggest that Muslims or otherwise have a Constitutional Right to advocate and to promote murder, torture, and terror on Americans is absolutely ridiculous! Yet, this is what they would have you believe (Judges 5:8).  Wake-up!