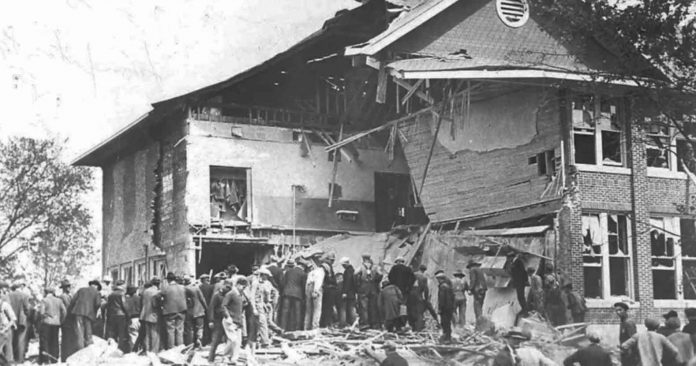 As the media and the government continue to use the tragic shooting at a Parkland, Florida high school to push their various agendas, it is important to remember that psychopaths who want to kill a lot of people—will do so with or without a gun. In fact, the deadliest attack on a school to ever take place on US soil was done so without a single round being fired.

In Bath Township, Michigan, 44 people, mostly children, lost their lives when a man by the name of Andrew Kehoe blew up the town’s school. This attack is often disregarded by history as it paints a different narrative outside of the normal problem, reaction, solution of grabbing guns. As a result, it has largely been erased from the narrative.

As Smithsonian.com reports, the local institute of learning was Bath Consolidated School, built only five years earlier to replace the scattered one-room schools of the surrounding farmland. It had 314 students from around the region, many the sons and daughters of farmers. Some students were bused in, and all took classes with their peers over the course of elementary and high school.

Kehoe, an electritian, had snapped and become angry after the town’s taxes levied on his farm had forced him into foreclosure.

“He was notified last June that the mortgage on his farm would be foreclosed, and that may have been the circumstance that started the clockwork of anarchy and madness in his brain,” claimed the New York Times.

So, while he worked at the school as an electrician, he wired it with explosives. Luckily for half of the students in the school, the timer on one of Kehoe’s homemade explosives failed to go off so the tragedy could’ve been far worse. However, the catastrophe resulting from the 38 children and 6 adults who died was still utterly horrific.

“There was a pile of children about five or six under the roof and some of them had arms sticking out, some had legs, and some just their heads sticking out. They were unrecognizable because they were covered with dust, plaster and blood,” wrote local author Monty J. Ellsworth in his 1927 account, The Bath School Disaster. “It is a miracle that many parents didn’t lose their minds before the task of getting their children out of the ruins was completed. It was between five and six o’clock that evening before the last child was taken out.”

Prior to setting off the explosives in the school, Kehoe murdered his family and burned down his farm. After the bombing, he blew up his car, killing himself and others nearby.

The story barely registered a blip in the national headlines at the time and was almost immediately wiped away by the news of Charles Lindbergh’s successful first-ever nonstop transatlantic flight two days after the bombing in 1927. And because Kehoe didn’t fit the stereotypical definition of a “terrorist” at the time, the United States quickly forgot about.

According to TIME, In the 1920s, the terrorists whom most Americans feared were anarchists. Newsreels regularly reported anarchist-related bombings and attacks in the U.S. and abroad. Anarchists were scary—but they were also characterized as shady foreigners. When people thought of anarchists, they thought of men like Sacco and Vanzetti, whose final appeal against death sentences had failed a few weeks before Kehoe’s attack. (They would be executed in August.) White men in small towns did not fit the mold.

Indeed, there is no mold for mass killers and instead of talking about solutions to stop the problem, Americans tend to focus more on the symptoms—as they are easier to use for divide.

Until we have a rational discussion on mental health and the direct role of psychotropic drugs used in most of these killings, all the gun banter in the world will not stop the next psychopath from inflicting harm on the world’s most vulnerable—with or without bullets.