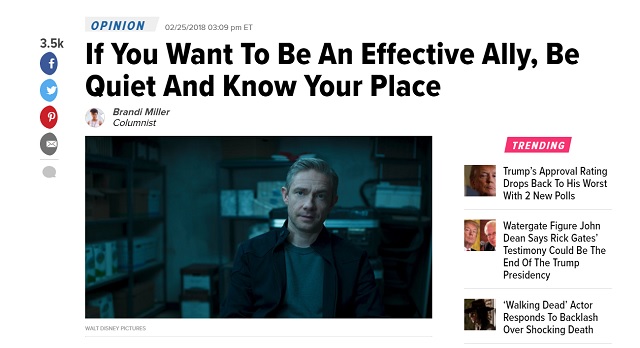 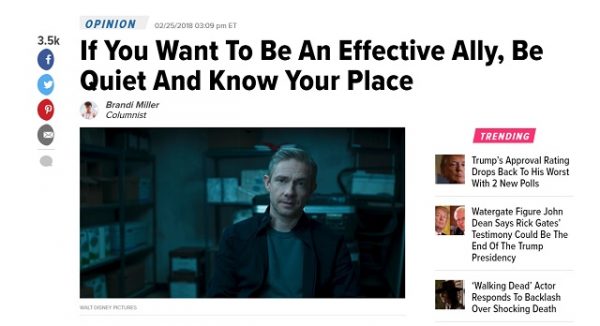 If you want to be a good white ally then shut up and “know your place,” so says HuffPost’s Brandi Miller in her latest column.

In her article on Sunday titled, “If You Want To Be An Effective Ally, Be Quiet And Know Your Place,” Miller says white allies need to learn from the movie Black Panther and the “uncolonized African nation of Wakanda.”

“Wakanda doesn’t need allies,” Miller says. “While ‘Black Panther’ is almost entirely disinterested in validating the participation of whiteness in the story of T’Challa and the fate of Wakanda, it offers a model for how white people can resist the urge to simply be allies in the cause of justice and rather be useful without having to be center stage or praised.”

She says “white allies” need to give up their power and and let people of color direct them on “how to be useful” in “fighting for the cause of justice.” “The lesson of ‘Black Panther’ for white allies is this: They must learn to be the sidekick, to be at the fringe, to give up power, to have people of color in their ears directing them on how to be useful in fighting for the cause of justice,” she says.

At the end of her piece, Miller reluctantly acknowledges Wakanda is not actually a real place, but nonetheless says the “principals for white allies stand.”

“The (unfortunate) reality is, we don’t live in Wakanda, there is not a place void of the impacts of colonialism, but the principals for white allies stand: If you are going to be here with us, be useful. If you want to speak, do so when you are needed and in the appropriate place and time. If you want to participate, do so in things that are meant for you. Know your place.”

Kudos to HuffPost for doing their part to help ease racial tensions.