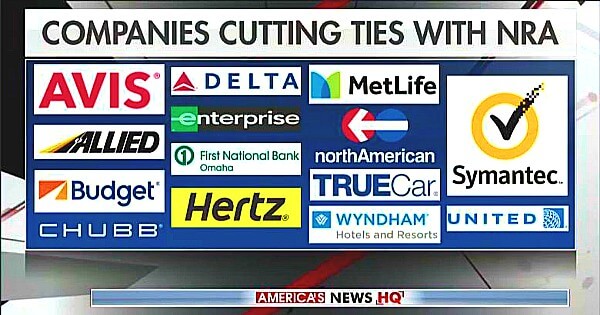 In the wake of the school shooting at Douglas High School in Parkland, Florida, the left has already ramped up their calls for everyone, everywhere to boycott the National Rifle Association (NRA).

For years, the NRA has been the boogeyman hiding in the closet of every leftist, anti-freedom hater in America. The Democrats and their friends in the media love to hate the NRA and often attack them as a “gun lobbyist” group. This gun lobbyist epithet is not entirely accurate because the NRA doesn’t necessarily lobby for the gun industry or gun companies… no, they lobby for regular American citizens who support the 2nd Amendment.

The NRA says that they have upwards of 5 million dues-paying members, a 2017 Pew Research Center Study “found that more than 14 million Americans consider themselves NRA members, above the real membership number of 5 million. This may be attributed to the fact that the NRA has millions more of Americans who support them and will tell pollsters they are members, even when they are not. In other cases, it could be that their membership has lapsed and for others, they might consider a family member’s membership part of their own.”

So when the left attacks the NRA, remember they are actually attacking gun owning Americans. By the way, the NRA is hardly the conservative voice in gun ownership. They’ve had a long and ongoing feud with more conservative groups like Gun Owners of America (GOA), so the left has made the NRA “the bad guy” because they happen to be the largest organization of their kind, not the most conservative. If the left hates the NRA with such a passion, how much more must they hate the millions of Americans in smaller, but more conservative gun rights organizations?

Late last week, the first company folded and announced that they’d be distancing themselves from gun owners and siding with the fascist-left.

Thank you for contacting us! All three of our brands have ended the discount for NRA members. This change will be effective March 26. Thank you again for reaching out. Kind regards, Michael

Boycotts work both ways, thanks for the handy list of places where five million+ people will no longer spend their hard earned money

Since Enterprise’s announcement other companies have joined suit, and CNBC even produced a nifty little table for us to know who we should be boycotting this year.

Along with Enterprise, steer clear of Avis, Budget, Alamo, National Car Rental, Hertz, Metlife, First National of Omaha, and the hotel chain Wyndham Worldwide. I’m sure there will be more of these ridiculous announcement in the near future.

The list of companies terminating their partnerships with the National Rifle Association is growing as public outcry against the gun group escalates following the deadliest mass shooting at a public high school in U.S. history.

Delta and United Airlines said on Saturday they will end group airfare discounts for NRA members and they were in the process of informing the gun group of this decision.

Also in the travel industry, Avis Budget Group and Hertz Global Holdings both cut ties with the NRA Friday afternoon.

First National Bank of Omaha cited a customer outcry in ending its NRA-branded Visa card with the group this week.

If these companies don’t want to support my rights, that’s their choice, but I also have the freedom to spend my money at their competitors. I won’t be wasting any of my hard earned money at these anti-freedom organizations, and I’d suggest you avoid them too.