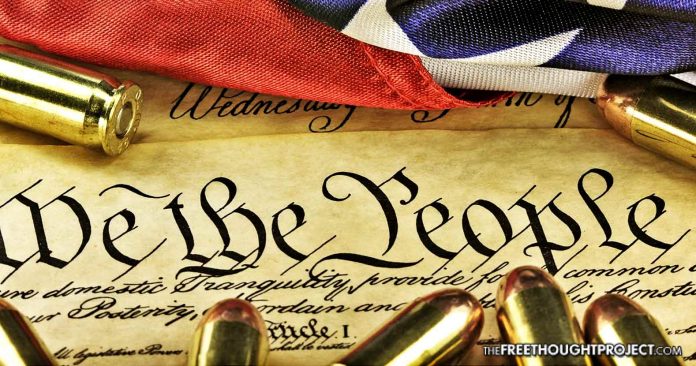 Annapolis, MD — While Americans watched the 2018 Olympics and mainstream media put on scripted town hall meetings to demonize law-abiding citizens who own guns, the 4th U.S. Circuit Court of Appeals in Richmond, Virginia handed down a blow to the Second Amendment.

In a 10-4 ruling, the federal court ruled that the state of Maryland’s ban on 45 different “assault” weapons and its 10-round limit for magazines was not a violation of the citizens’ constitutional rights. The ruling was not without harsh dissent, however.

“Put simply, we have no power to extend Second Amendment protections to weapons of war,” Judge Robert King wrote for the court, adding that the Supreme Court’s decision in District of Columbia v. Heller explicitly excluded such coverage, according to NBC.

“It’s unthinkable that these weapons of war, weapons that caused the carnage in Newtown and in other communities across the country, would be protected by the Second Amendment,” Maryland Attorney General Brian Frosh, who spearheaded the movement, said.

“It’s a very strong opinion, and it has national significance, both because it’s en-banc and for the strength of its decision,” Frosh said.

As NBC reports, however, Judge William Traxler issued a dissent. By concluding the Second Amendment doesn’t even apply, Traxler wrote, the majority “has gone to greater lengths than any other court to eviscerate the constitutionally guaranteed right to keep and bear arms.” He also wrote that the court did not apply a strict enough review on the constitutionality of the law.

“For a law-abiding citizen who, for whatever reason, chooses to protect his home with a semi-automatic rifle instead of a semi-automatic handgun, Maryland’s law clearly imposes a significant burden on the exercise of the right to arm oneself at home, and it should at least be subject to strict scrutiny review before it is allowed to stand,” Traxler wrote.

“Maryland’s law needs to become a national model of evidence-based policies that will reduce gun violence,” Banach wrote in a statement.

Sadly, the court entirely ignored the Supreme Court case of District of Columbia v. Heller which determined that the Second Amendment protects weapons that are “in common use at the time for lawful purposes like self-defense.”

As TFTP has previously reported, every time a lunatic, who is usually on some form mind-altering pharmaceutical, goes on a shooting rampage, the do-gooders in Washington, with the aid of their citizen flocks, take to the TV and the internet to call for disarming the American people.

The citizens who call for themselves and their neighbors to be disarmed, likely think no deeper than the shallow speeches given by the political blowhards, designed to appeal to emotion only. They do not think of what happens during and after the government attempts to remove guns from society. They also completely ignore the fact that criminals do not obey laws and making guns illegal would have zero effect on criminals possessing guns.

In the perfect statist world in which only the government has guns, we’re told that crime rates would plummet, people wouldn’t be murdered, gun violence would be brought to its knees, and a disarmed heaven on Earth would ensue. But how effective would disarming the citizens actually be at preventing gun violence, while at the same time keeping guns in the hands of government?

One simple way to determine the outcome would be to compare mass shootings in America with those killed by police. It is entirely too easy to compare all senseless murders carried out by the state to those carried out by citizens, so we will zoom in with a microscope.

However, just as a point of reference, in the 20th Century alone, governments were responsible for 260,000,000 deaths worldwide. That number is greater than all deaths from illicit drug use, STD’s, Homicides, and Traffic Accidents — combined.

Now, on to the micro-comparison.

As Mother Jones notes, in their database, they exclude shootings stemming from more conventional crimes such as armed robbery or gang violence. Other news outlets and researchers have published larger tallies that include a wide range of gun crimes in which four or more people have been either wounded or killed. While those larger datasets of multiple-victim shootings may be useful for studying the broader problem of gun violence, our investigation provides an in-depth look at the distinct phenomenon of mass shootings—from the firearms used to mental health factors and the growing copycat problem.

The comparison is staggering and should shock the conscience. But to truly get a perspective, lets go back three years and compare all of the citizens killed by cops since the beginning of 2015 to the number of mass shooting deaths.

In a time period that is less than one-tenth the amount of time it took mass shooters to kill 816 people, cops have killed nearly 5 times as many citizens.

The 2nd Amendment wasn’t put into place so Ted Nugent could piss off liberals in a horrible reality TV series, or so the Duck Dynasty folks could shoot their dinner. It was put there because the ability of a people to defend themselves is the only thing standing in between  freedom and slavery.

Of course, a society without guns sounds fantastic and, in a perfect utopian world, it would be nice not to need a gun. However, we do not live in utopia.

It’s not about “clinging to the second amendment” or being addicted to firepower. It’s about protecting you and your family and no one having the right to hinder that protection.

As John Locke stated, self-defense is the first law of nature. Each person owns his or her own life and no other person has a right to take that life. Those who would attempt to stop you from defending yourself are attacking the very right from which all other rights are derived — protection of one’s own life.