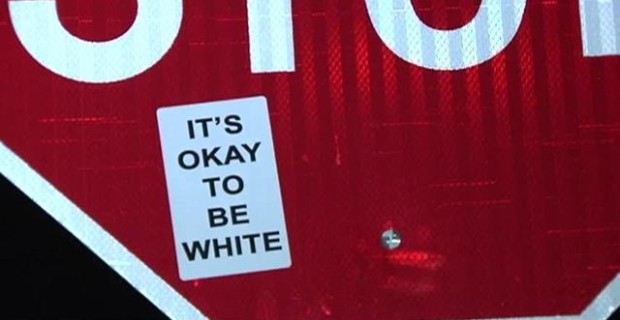 Some residents were “horrified” after over a hundred “It’s Okay to be White” signs were plastered all over Emmaus, Pennsylvania.

The signs have been popping up in different places for the last three weeks, with Borough Manager Shane Pepe calling them a “distasteful” act of “vandalism”.

Another resident said they were “horrified” by the signs.

At least 100 have been torn down, but they just pop up again the next day. Police are now working with residents to try to track down the culprits.

“As fast as they are getting torn down, someone is putting them back up the next day,” states a post on the Emmaus Borough Facebook page.

“If you see someone that is NOT a Borough worker doing something at one of our signs, please call the police.”

Confusingly, the post also invites residents to tear them down, which contradicts with the message of reporting people near the signs who aren’t Borough workers.

The entire “It’s Okay to be White” stunt was originated by members of the 4chan messaging board last year.

The signs were plastered around numerous universities and schools across America and Canada, leading one high school principal to claim the scheme was, “part of a concerted national campaign to foment racial and political tension in our school and community.”

The original goal of the campaign was to trigger hysterical overreactions to emphasize how anti-white racism has been normalized in culture, an objective that has been achieved over and over again.

The Edmonton Metro afforded the issue front page coverage last year, warning, “There is a targeted approach to this.”

The stunt also set Twitter ablaze, prompting many far-left social justice warriors to confirm the fact that they are racists.