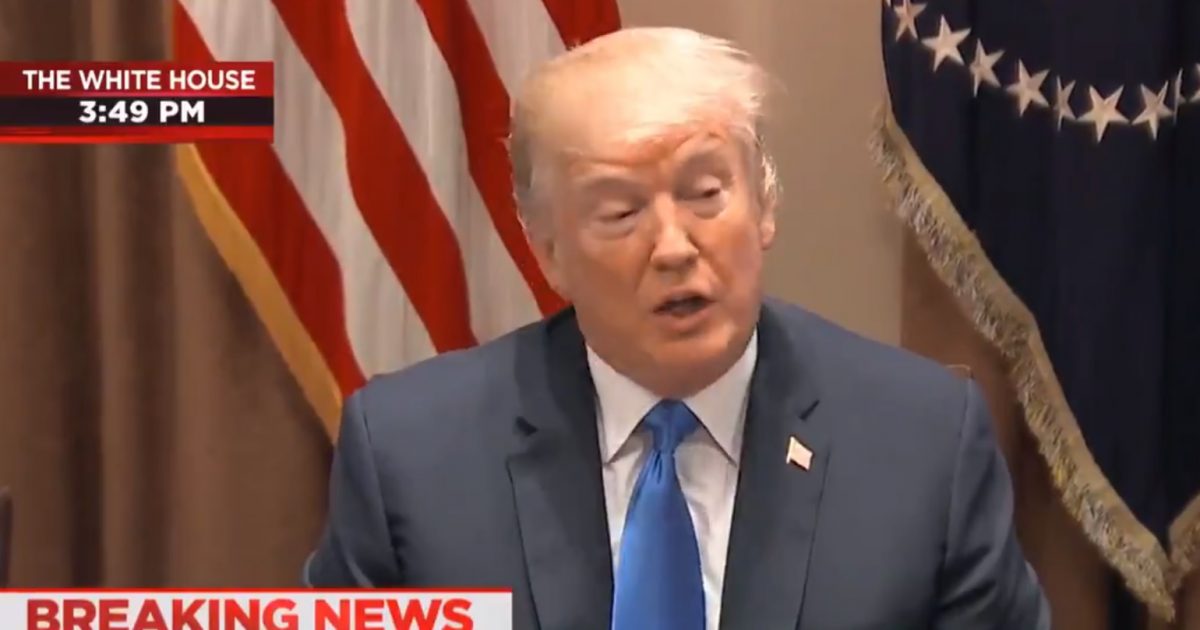 Well, now it should be very clear to anyone who voted for President Donald Trump on which side of the Constitution and the Second Amendment he is actually on.  The man who claimed, “The eight-year assault on your Second Amendment freedoms has come to a crashing end,” to the NRA, and added, “You have a true friend and champion in the White House” is now attacking the very rights protected in that Amendment, as well as the rights protected in the Fifth Amendment head on.

President Trump has already violated his oath of office on several occasions, but recently, he’s done it with attack on the Second Amendment, targeting bump stocks for ban (something that wouldn’t stop a single shooting) and calling on Congress to raise the minimum age to obtain a rifle (something that wouldn’t stop a single shooting either).  No authority is given in our Constitution to Congress to restrict or regulate arms at all.  It certainly is not provided to the Executive Branch.

On Wednesday, Trump took a step further, not only attacking the Second Amendment, but also the Fifth in the process.

Trump threw his support behind another Manchin-Toomey bill, and we know both of those guys suffered a humiliating defeat under Obama for their gun grabbing legislation.

However, following comments from Vice President Mike Pence, who was claiming the DC could somehow give help to local law enforcement and families in taking weapons from people considered “a danger to others or themselves,” the president spoke up and completely went anti-Constitutional.

“I like taking the guns early like in this crazy man’s case that just took place in Florida … to go to court would have taken a long time,” Trump said at a meeting with lawmakers on school safety and gun violence. “Take the guns first, go through due process second.”

WATCH: President Trump: "I like taking the guns early … Take the guns first, go through due process second." pic.twitter.com/aydEZdAGq0

No, Mr. Trump.  You have due process of law, Sir.  Then, and only then, may you lawfully deny rights.  Trump took an oath to uphold this part of the Constitution.

You can’t just go taking people’s property and denying them their rights without due process of law because it makes you look like you’re doing something when all you’re actually doing is committing a crime against that person.

He also added, “A lot of people are saying ‘oh you shouldn’t be saying that,’ but I don’t want mentally ill people having guns.”

Sorry, Sir.  You are president, you don’t get what you “want.”  You obey the Constitution.  Furthermore, who will decide who is mentally fit to keep their rights and guns?  You?  A government approved shrink?

No, this is a family matter and families must deal with their own, apart from government on the issue of mental health.

I know plenty of people who don’t have all their dogs barking that could be considered mentally ill in a sense and have multiple weapons, but they are no threat to anyone except those who wished to do them harm.

Not only that, but there are many people who are considered mentally ill who simply couldn’t use arms they might actually possess.  That doesn’t give government the right to take away their rights nor steal their property in the name of “safety.”

Then, let’s think about all you veterans out there.  This was the ploy from the Obama administration to attack you and your rights, the rights we are told you fought to defend. What happens when they label your PTSD a mental illness?  Hmmm?  Are you in favor of that?

This is a really bad idea.

Just like healthcare, I warned you years ago, after Sandy Hook, to not fall for this gimmick of talking about mental health and rights.  These people are setting the American people up in a debate that is unlawful, which attack your rights for due process, gun ownership and quite possibly the ability to live in freedom.

And this is brought to you by those in government who simply will not stay within the confines of the Constitution and believe they are a democracy when they have no idea what the Constitution actually says or means.

And now, President Trump is calling on Congress to pass a “comprehensive gun control bill.”

“We’re going to come up with some ideas,” Trump said.  “Hopefully we can put those ideas in a very bipartisan bill. It would be so beautiful to have one bill that everybody can support, as opposed to – you know – 15 bills, everybody’s got their own bill.”

It’s not beautiful.  It’s criminal.  It’s anti-American.  It’s downright treasonous, and they all know it, but people will continue to support it because they have been listening to kids who are simply useful idiots being put to the forefront to emotionally propagandize the American people about guns.

Hey NRA members, is that really what you support?  I mean, I know the NRA has sold the American people out over the course of our history.  It’s thoroughly documented, but is this really what American NRA supporters believe is lawful out of DC?

The phone lines need to be flooded and emails sent teaching theses representatives and President Trump what the Constitution says on this matter and how it limits the government’s power on this issue.