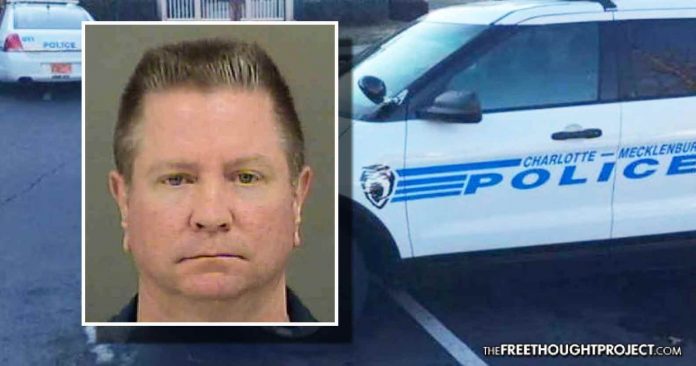 Charlotte, NC  — Charlotte-Mecklenburg Police Officer Matthew Porter, 54, was arrested and charged with sexually assaulting a ten-year-old girl. He’s been charged with 28 felony charges, which include 20 counts of indecent liberties and eight counts of first-degree sex offense. The girl, who’s now 17, said it all started when she was 10.

She now lives in Nevada and told authorities there what the career police officer, who has now been placed on unpaid administrative leave, did to her. CMPD Deputy Chief Katrina Graue made the announcement at a press conference in Charlotte on Tuesday. She said:

According to The Charlotte Observer, two CMPD detectives traveled to Nevada to interview the victim after they were contacted by Nevada officials on November 8. Chief Kerr Putney said:

I am disappointed that one of our officers is accused of this very serious offense…We represent the law and absolutely will not tolerate one of our own violating it. It’s our job to protect this community. We have no place in our ranks for anyone who would violate the trust of a child in this manner.

Porter has been a police officer since 1995. He joined the aviation wing of the department in 1997 and served as a helicopter pilot for CMPD. Those choppers are known on the street as “ghetto birds” in Charlotte but now that one of the pilots has been outed as an accused pedophile, the derogatory street title might be changed to something more fitting of the crimes for which Porter now stands accused.

While police are quick to acknowledge Porter has not worked a sexual assault case due to his status as a police department pilot, we cannot help but wonder what the officer may have been doing with all of the sophisticated surveillance equipment he had at his disposal as a police department helicopter pilot. Porter started flying long before drones were invented. It’s conceivable to believe he may have used his spy equipment for more nefarious reasons.

Just last year, prosecutors in the United Kingdom accused several officers of videotaping citizens having sex. Even though a jury believed there was not enough evidence to convict the crew, the prosecutor leveled his accusations nonetheless saying in closing arguments:

(The police officers) used the unique viewing position afforded to them, together with the powerful video camera with which the helicopter is equipped, to video members of the public engaged in private activities in a gross violation of their privacy.

More than likely, Porter has additional victims in his proverbial skeleton’s closet. Unfortunately, from his vantage point in his helicopter, few will ever know their privacy was likely violated by an accused pedophile cop. He will have to spend what little pension he has on attempting to keep his derrière out of prison.

But the odds are on his side. As TFTP has reported, police officers, like the ones in the UK and all around the US, rarely see the inside of a prison cell, very rarely have to register as a convicted sex offender, and do little prison time if they’re ever even convicted. We believe it’s because juries often have sympathy for police officers. But who will take a stand for their victims when they are accused? It’s time police officers are held to the same standards of justice the rest of the citizens are held to.