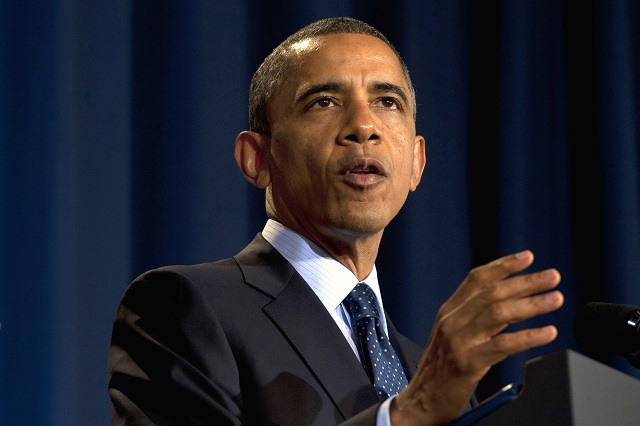 Former President Barack Obama gave an off-the-record, hour-long speech at MIT last Friday where he called for Facebook, Twitter and Google to do more to censor free speech on the internet.

Reason Magazine reports the speech was “kept completely secret by virtually all attendees, who had to agree that they would not record, photograph, tweet, or report on the event before being granted a seat in the audience.”

Nonetheless, someone secretly recorded the speech and gave a copy to Reason.

Here’s one of the highlights from Reason:

Obama thinks Google, Facebook, etc., are “a public good as well as a commercial enterprise,” and should consider whether they are corroding our democracy.

Obama described social media platforms as a “hugely powerful potential force for good,” but then immediately hedged. “What’s also true is that our social media platforms are just a tool,” he said. “ISIS can use that tool. Neo-Nazis can use that tool. I do think the large platforms—Google and Facebook being the most obvious, Twitter and others as well, are part of that ecosystem—have to have a conversation about their business model that recognizes they are a public good as well as a commercial enterprise. They’re not just an invisible platform, they’re shaping our culture in powerful ways.” Much of that shaping is bad, according to Obama. “Essentially we now have entirely different realities that are being created with not just different opinions, but now different facts,” he said. “And this isn’t just by the way Russian inspired bots and fake news. This is Fox News vs. The New York Times editorial page. If you look at these different sources of information, they do not describe the same thing. In some cases, they don’t even talk about the same thing. And so it is very difficult to figure out how democracy works over the long term in those circumstances.”

Obama noted that in other countries—like China—the government simply decides which viewpoints can be aired in public, but “that’s not who we are, and that’s not the society I want to live in.” Even so, media giants like Facebook and Google should keep in mind that the U.S. government has a role to play in ensuring there are “basic rules of the road in place that create level playing fields.”

There’s two different worlds now because for the first time ever the MSM has lost it’s stranglehold on the news and its ability to control the debate.

The “great divide” is because people are now getting real, uncensored news on the internet and having open discussions about real issues like immigration which the MSM is losing their ability to suppress.

That’s why the SPLC and ADL are being appointed as virtual “thought police” to censor right-wing voices on YouTube and other social media sites.