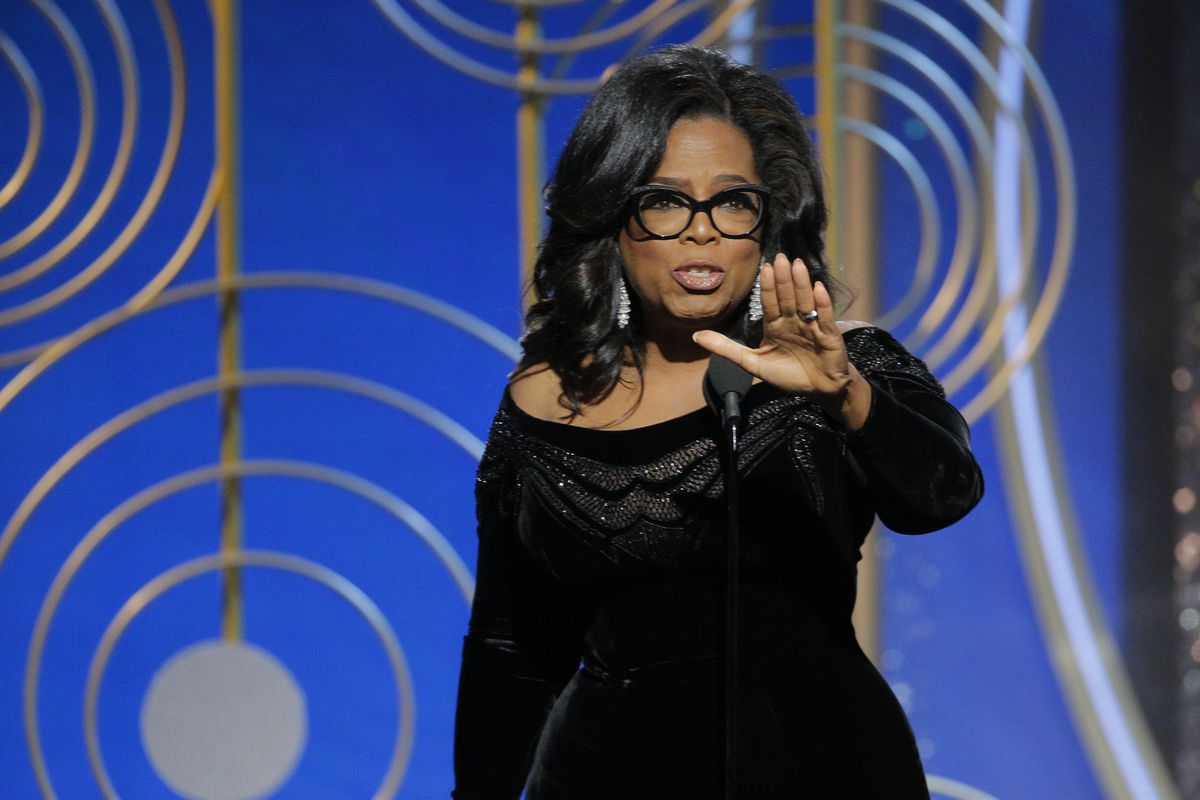 People Magazine has the word from on high: “Amid calls for her to consider a run for the White House — from fans as well as her closest friends — “I went into prayer,” she tells PEOPLE in the magazine’s new cover story. “ ‘God, if you think I’m supposed to run, you gotta tell me, and it has to be so clear that not even I can miss it.’ And I haven’t gotten that.”

My article here isn’t a scan of strange and questionable and revealing things Oprah has done over the years. It’s about the God question, as in:

Why would anyone tell the public she will relay the word of God to them?

The future of America hangs in the balance, and Oprah will let millions know what God has to say about it. He might say, “Run, Oprah, run.” Or he might not.

This God is not just Oprah’s private counselor, or worse, her subjective projection. No, to Oprah he is THE God. Therefore, what he confides to Oprah applies to everyone. She is the conduit, the priestess, and in this case, also the potential beneficiary of His Word.

My, my. That’s some remarkable chutzpah. It sparkles.

It smacks of this: “I’m so important I know people will take my account of what God said as authoritative.” Wow.

And also: “I would never make up my mind about running for the presidency on my own. That’s out. I’m too humble for that. Instead, I’ll refer to, let’s see, uh, the Creator of the Universe and what he specifically tells me.” Stunning hubris masked as humility. Nice trick.

Oprah is parlaying every tidbit of New Age wisdom she’s accumulated and disseminated in her decades of broadcast history, in order to give this “God connection” story some serious legs. It’s Oprah, Chapter 3,456: “The Presidency Conundrum and How I Handled It.”

I’m trying to imagine myself as an Oprah fan, on the edge of my chair, day after day, waiting for her to come across with the mighty Message from The Lord.

And what would God be thinking? “This woman is now asking me whether she should run for the presidency of the United States? What makes her believe I respond to such questions? I mean, if that’s part of my job description, wouldn’t I have advised other candidates? Bernie Sanders? Marco Rubio? Jeb? George? Bob Dole? Kasich? What am I? A political pundit?”

Does God tell one candidate from each Party to run? Or does he favor only one candidate in each race? Maybe the Pope can supply some information. He’s familiar with this type of higher communication.

Perhaps we should poll the leader of every organized religion in the world. “Should Oprah run?” Every religion believes it has the best (or only) line to God.

In 1998, Oprah stated, “I never think about what I want. It’s about what you want to give to other people.” Does God believe Oprah NEVER thinks about what she wants? If not, He might consider that egregious whopper a reason for her not to run.

If Oprah does throw her hat in the ring, how many people will say, “Well, I’m voting for her because God told her go for it”?

This would be an interesting twist. Oprah holds a press conference and says: “God told me not to run but I’m going to do it anyway.” Now she would have my interest. Now I would want to hear more.

Reporter: Why did you decide to go against what God told you?

Oprah: Because I think every person should make up his/her mind about what to do in life.

Reporter: Even if God says no?

Reporter: Do you think that happened in your case, or were you always planning to run, regardless of what God advised?

Oprah: I was always planning to run. And God is testing my will. Both.

Reporter: So you were, in a sense, using God to get you more votes.

Oprah: If that were that my motive, I would have lied and said God told me to run.

Oprah: Already asked and answered. God is testing my will.

Reporter: How do you know that?

Oprah: I have insight.

Reporter: You mean a pipeline to God’s intentions?

Oprah: When God speaks to me, I listen very carefully. I listen to the sound of the words.

Reporter: So this time, what exactly did God tell you?

Reporter: And you knew—

Oprah: I knew it was a test. He was leaving the door open for me. Knowing that was enough. I could make up my own mind.

Reporter: So in a sense, he’s on your side.

Oprah: He’s always on my side.

Reporter: Do you see God when He talks to you?

Oprah: This isn’t Skype. And forget the big “He.” God isn’t an old man in the sky.

Now we would have the bare bones of an ever-expanding story. Who knows where it would lead?

Q: “Did God keep guiding you to change weight-loss regimens?”

But alas, I fear this Oprah tale isn’t going to go that far. We’ll get a stunted version.

Vapid generalities are the stuff and fluff of the New Age.