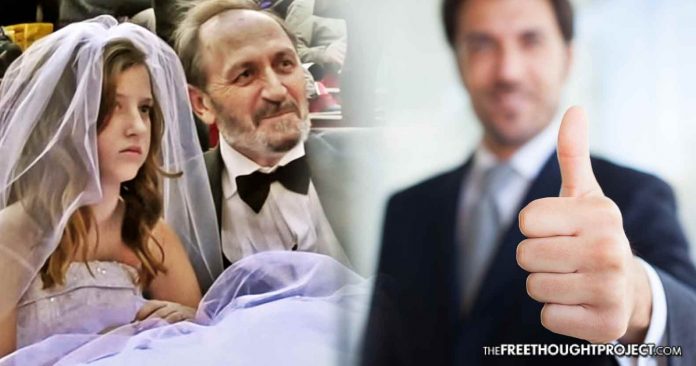 Frankfort, KY — A bill that would have banned adults from marrying children in Kentucky was struck down this week prompting outrage from politicians and activists alike.

Senate Bill 48, known as the “child bride” bill, was yanked from the agenda this week, just hours before a scheduled vote by the Senate Judiciary Committee. This is the second time in only two weeks that lawmakers have protected the depraved act of adults taking children as their spouses.

“SO disappointed! My SB 48 (outlaw child marriage) won’t be called for a vote,” sponsor  Julie Raque Adams, a Louisville Republican, said in a Tweet. “It is disgusting that lobbying organizations would embrace kids marrying adults. We see evidence of parents who are addicted, abusive, neglectful pushing their children into predatory arms. Appalling.”

Other people reacting to the bill were a little more outspoken in their response.

“This is legalized rape of children,” Eileen Recktenwald, the executive director of the Kentucky Association of Sexual Assault Programs said. “We cannot allow that to continue in Kentucky, and I cannot believe we are even debating this is the year 2018 in the United States.”

Adams did not say who was lobbying against the bill, however, she noted that the opposition is allegedly concerned about parents’ rights.

As it stands, currently in Kentucky, teens under 18 can marry adults at ages 16 and 17 with the permission of their parents. However, according to the current law, it is up to a judge to decide if a child under the age of 16 can marry an adult—and the girl must be pregnant. For obvious reasons, critics of the current law claim that a pregnant 13, 14, or 15-year-old girl—impregnated by the adult they are to marry—is evidence of a sex crime as a child cannot consent to sex. But it is the law nonetheless.

As the Courier-Journal reports,

The bill would establish 18 as the legal age for marriage. Those who are 17 could marry with permission of a district judge, if the age difference between the 17-year-old and the other party is fewer than four years.

But in cases of a minor marrying an adult, the judge would have to review material including any child abuse records involving the teen and check for any sex-offender records of the adult. The judge also would have to consider factors including the maturity and independence of the teen, determine that the teen has completed high school or obtained a GED and review any domestic violence records of either party.

The judge is to deny the request in cases including if the adult is in a position of authority over the minor, has a conviction for child abuse or a sexual offense, or if there is a pregnancy or child in common that established that the intended spouse was the perpetrator of a sex crime against a girl too young to consent.

“I had some problems with the bill,” Sen. John Schickel, a Boone County Republican said Thursday in defiance of the bill. “Decisions involving a minor child should be made by a parent, not the court.”

“I know there are some concerns, but it’s 2018 and it’s definitely a problem,” Sen. Wil Schroder, a Wilder Republican and a co-sponsor of SB 48, said.

As TFTP has previously reported, this problem is not isolated to Kentucky. Laws across America have legalized pedophilia with children as young as 10-years-old and no one appears to be stopping it.

Girls as young as ten are among more than 200,000 children wed to adults in the United States in just the past 15 years, as — despite minimum requirements that a person reach the age of 18, or legal adulthood, nationally — a smattering of locations have preserved loopholes legally permitting child marriage.

Alarmingly, the number of children married away to fully mature adults could be much higher than the already-startling number — ten states provide only fragmentary statistics or none at all.

And the loopholes don’t exist solely in theory — adults across the U.S. have actively jumped at the opportunity to marry kids — even amid a decline in the number of marriages, overall.

To wit, three 10-year-old girls and an 11-year-old boy were among the hundreds of thousands of children and minors the system somehow permitted adults to lock into marriage — despite their bodies and mindsnot yet being fully developed.

“At least 207,468 minors married in the US between 2000 and 2015, according to data compiled by Unchained At Last, a group campaigning to abolish child marriage, and investigative documentary series Frontline,” The Independent reports.

Indeed, exemptions from the national marriage minimum age of 18 exist for circumstances like pregnancy and parental consent — in every state in the country.

Most states allowing adults to take a child spouse require the consent of one or both parents, permission from a judge, or some combination thereof — however, there is a rather astonishing footnote to this underbelly of marriage and child love in the United States.

As Frontline noted in a special report,

“In 26 states, there’s no minimum marriage age, according to the Tahirih Justice Center. Children in those states can get married at any age if certain conditions are met.”