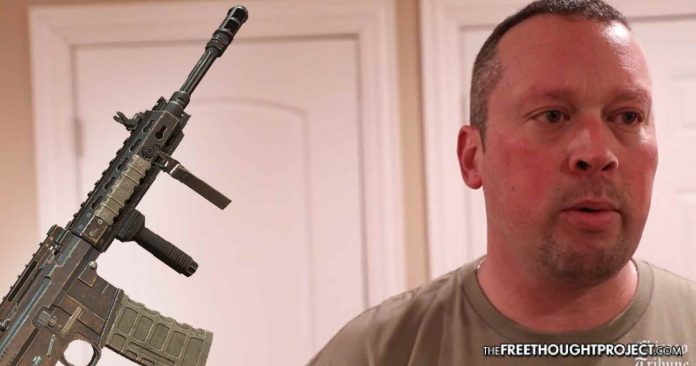 Oswego, IL — The question is often asked whether “a good guy with a gun” can stop “a bad guy with a gun,” and in one recent case, a “good guy” in Oswego, Illinois, used his gun to save his neighbor from a stabbing attack.

When he witnessed a person attacking his neighbor with a knife, David Thomas, 41, told WGN-TV News that he immediately jumped into action and went to his apartment to retrieve a firearm. Instead of grabbing his handgun, he chose to use his AR-15.

“I ran back into the home, into my house and grabbed my AR-15. Grabbed the AR-15 over my handgun. It’s just a bigger gun. I think a little bit more than an intimidation factor definitely played a part in him actually stopping,” Thomas said.

As soon as Thomas appeared with his AR-15 and ordered the man with the knife to stop the attack, the man took one look at the rifle and fled the scene. Thomas told the Chicago Tribune that he believes the AR-15 packed just enough intimidation to let the attacker know he was in serious danger.

“He was a half a breath away from getting his head blown off and he knew that,” Thomas said. “That’s why he put the knife down.”

The attack started when a woman who lives in the apartment building went outside to meet a pizza delivery man and was confronted by Jacob Currey, 22, and Alyssa Wright, 19.

Currey initiated a fight, and when the woman’s husband stepped in, Currey began stabbing him with a knife. The woman is 9 months pregnant, and she told the Tribune that Currey threatened to attack her next. “He told me he was gonna kill my baby—while his hand was covered in my husband’s blood,” she said.

Currey and Wright were eventually arrested by police and charged with aggravated battery and mob action.

Thomas is a certified firearms instructor who has both a valid firearm owner’s identification card and a concealed carry permit. His quick thinking prevented what could have been a deadly attack, and Detective Bryan Harl even admitted that Thomas should be credited with preventing the situation from getting worse.

“He did in the moment what he thought was going to de-escalate this situation and stop any further violence or loss of life and for that, he is to be praised,” Harl said.

While Thomas did not kill anyone in this case, he is not the first person to use an AR-15 for self-defense. In Oklahoma, a man used his AR-15 to shoot and kill three masked intruders inside his father’s home in March 2017. The District Attorney concluded that the man “was in fear for his life as he perceived the intruders and discharged his weapon at the intruders,” and as a result, he “acted in accordance with his rights as an Oklahoma citizen.”

Thomas said he believes this is a perfect example of why “every single law-abiding citizen should have an AR-15,” and should pursue training to learn how to properly defend themselves with a firearm.

“The AR-15 is my weapon of choice for home protection,” Thomas said. “It’s light, it’s maneuverable. If you train and know how to use it properly, it’s not dangerous. And this is just a perfect example of good guy with an AR-15 stopped a bad guy with a knife. And there were no lives taken, so all in all it was a good day.”