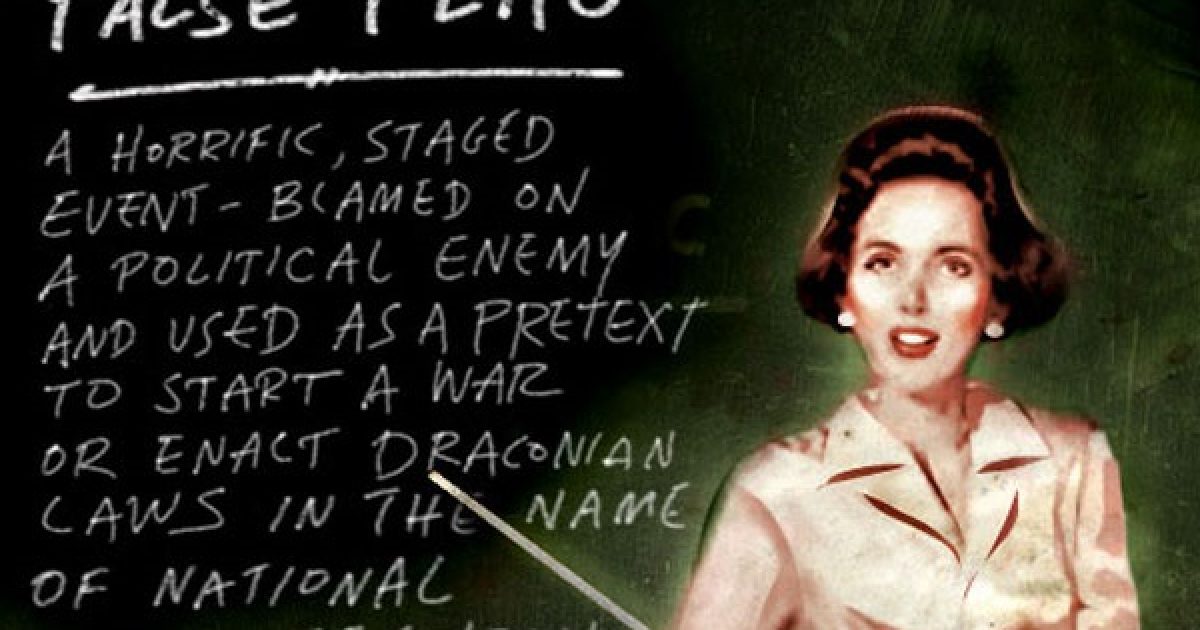 Russian Revolutionary Vladimir Lenin said, “The best way to control the opposition is to lead it ourselves,” and leading it they are in America today.

Leading through opposition simply means that if a tragedy is necessary to bring about a means to an end (more gun control), then they will bring it about themselves through False Flag attacks to lead people to the debating table for more gun control (Jeremiah 11:9).

This will continue until the American people realize who and what is behind all of this, which at length, will be full gun confiscation.  America, there is NO debate! You have God given rights, not privileges handed down to you by the state.  These people work for you, not you for them.  Make the distinction for your own sakes.

A well regulated Militia, being necessary to the security of a free State, the right of the people to keep and bear Arms, shall not be infringed. -2nd Amendment of the Bill of RIGHTS

False Flag refers to covert operations designed to deceive; the deception creates the appearance of a particular party (group or nation) being responsible for some activity, disguising the actual source of responsibility.

P.S. False Flag does not mean that people did not die, it just means you must seek out who really committed the act!

Adolph Hitler was notorious for sending in his brown shirts to commit crimes on his orders, and then he would come in behind them only to blame his political opposition for the crimes that he was responsible for committing.  He would then play the problem solver so he would look like the savior of the world.  However, little did people know that until after the fact.  History shows him over and over again as the responsible individual (2 Thessalonians 2:3-12).

If you want to see history in replay simply look to the history of dictators and what it is that they did and how it is that they did it when it comes to their crimes committed against their own people.  They always found pleasure in doing the unthinkable in so many different ways.  History is, without a doubt, today repeating itself.

In the present, we go from this alleged massacre in Florida with no evidence produced of the shooting spree itself, to a national gun control debate within just a couple of days led by CNN.

The CNN debate questions were found to be scripted and so were the questions for the students as well. (video scrubbed – removed by Facebook and Twitter)

We see eyewitness and ear witness contradictions from start to finish concerning the CIA-controlled media’s narrative on what allegedly took place.

Eyewitnesses Alexa Miednik says she spoke to the suspect Nikolas Cruz after hearing gunshots during alleged shooting in another part of the building.

Alexa said, “I kind of joked to him about it and said I’m surprised you weren’t the one who did it.” She added, “He just gave me a, ‘huh?'”

Ear witnesses say there were 3 shooters and 2 shooters. (Videos have been scrubbed)

There were three drills during the school day, the third one in which the police told students that they were going to shoot off blanks during the drill while students were to act like it was a real scenario, and magically Nikolas Cruz arrives on the scene during the drill with a weapon. The media also wants you to believe that he folded up an AR-15 and put it in his back pack by the way.  The AR-15 just happens to be the very weapon that the tyrants are looking to ban. (Video has been scrubbed)

A teacher claims that she thought the shooter was originally a policeman with full tactical gear on, full metal body amour, helmet, face mask, etc., which no one saw Nikolas Cruz wearing.

“Useful idiot” and blatant liar David Hogg being coached by the media for his scripted narrative on camera (video scrubbed) as well as how David’s sister lost 4 friends, then 2… Then 3?

From the EMTs and police being told to stand down during the alleged shooting all the way to the corruption that is now being exposed of that of the Chief of Police and the Broward County Sheriff’s office and its corrupt connection, we see something is not right in all of this.

The media and its allies have a long history of attempting to cover for conspirators. (Ruby Ridge, Waco, Oklahoma City bombing, Columbine etc.)

Don’t forget this lunatic in Florida, namely the sheriff of Broward County who has compared himself to Gandhi, Martin Luther King, Abraham Lincoln, and former Miami Dolphins coach Don Shula, has extensive ties to every corrupt politician known in the USA.  Now surfacing are the many cover-ups with Broward County Sherriff Scott Israel (Proverbs 5:22).

We, as a people, have seen corruption coming from every corner of those who call themselves journalists and representatives (in whatever capacity), the lies, and cover-ups and treason (Article 3, Section 3 US Constitution).  And now, a blatant attack on anyone that would dare question the narrative is enough to understand who is doing the attacking through authoritarian means.

It is the truth that sets men free (John 8:36), not what we perceive it to be because they said so.

It has been said, “A lie can run around the world before the truth can get its boots on.”  The fact of the matter is that in this country, with all the light and knowledge that we have been so graciously given by our God, there is no excuse for a lie to take a half of a step (Isaiah 51:4).