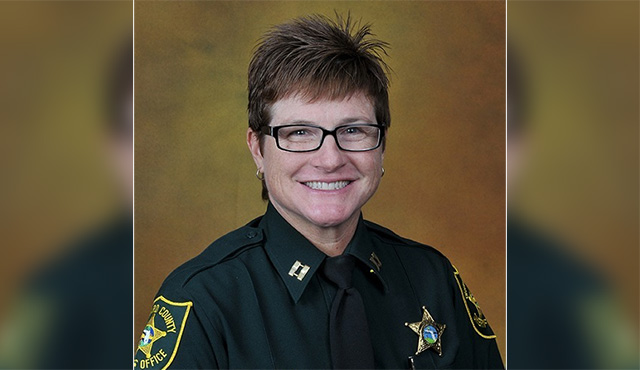 Captain Jan Jordan of the Broward Sheriff’s Office reportedly ordered deputies to form a “perimeter” around Stoneman Douglas High School rather than immediately engage the shooter in accordance with BSO training and nationwide active-shooter procedures.

From the Miami Herald:

The Broward Sheriff’s Office captain who initially took charge of the chaotic scene at a Parkland high school where 17 people were killed told deputies to form a perimeter around the deadly scene — which they did instead of going in to confront the shooter, according to a partial BSO dispatch log obtained by the Miami Herald.

These unstable, left-wing lunatic authorities will let us all die in the name of “officer safety” during active-shooter events while they “secure the perimeter” and then blame the NRA and demand we be disarmed in the aftermath.

This woman isn’t fit to own a gun, let alone run a sheriff’s office.

Before being appointed to command Parkland, Jordan was assigned to BSO’s civil division, which serves subpoenas and injunctions, according to her online biography. She was previously with the Fort Lauderdale Police Department, where Israel also worked.

BSO did not directly dispute that Jordan issued a stand-down order. Nor did the agency confirm it.

“If detectives had answers to all of the questions, then there would be no need for an investigation,” BSO spokeswoman Veda Coleman-Wright wrote in an email late Thursday night.

…Time stamps were not visible on the log of calls to BSO dispatch obtained by the Herald. But a fuller version shared earlier with Fox News shows the shooting — which lasted roughly six minutes — would have been over by the time of Jordan’s order.

Don’t let that last part fool you, all the evidence is point to these deputies being told either explicitly or effectively to stand down.

According to the left, the total failure of the government and police to protect us should all be ignored in place of blaming the NRA and the Second Amendment. I’m sure David Hogg will come out any minute now to say the cops potentially standing down is no big deal because Jan Jordan is a “great person” and the “real culprit” to be blamed is Gov. Rick Scott and Donald Trump.