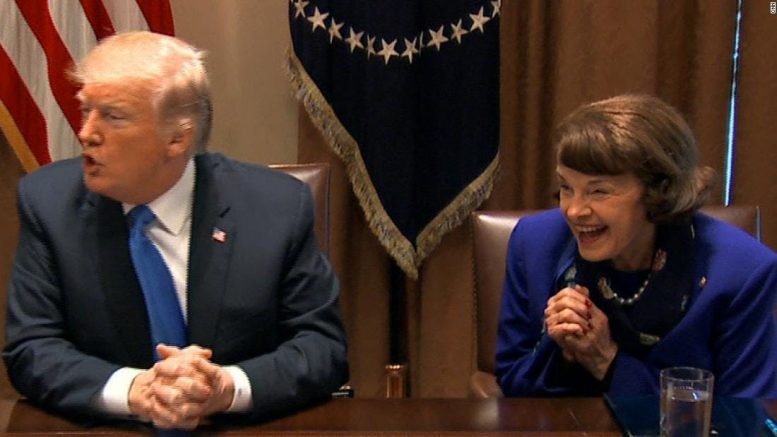 U.S. President Donald Trump has flip-flopped from wanting to arm teachers to now siding with Democrats who  want to confiscate and ban semi-automatic firearms, violating the Second Amendment of individuals deemed “dangerous” by the government.

In a recent lawmaker conference, Trump proposed confiscation of guns from certain individuals deemed to be dangerous, even if it violates their right to due process, The Hill reported.

“I like taking the guns early, like in this crazy man’s case that just took place in Florida … to go to court would have taken a long time,” Trump said at a meeting with lawmakers on school safety and gun violence.

Trump was responding to comments by Vice President Pence that families and local law enforcement should have more means to report potentially dangerous individuals with weapons when he made the disturbing comments against liberty and freedom.

“Allow due process so no one’s rights are trampled, but the ability to go to court, obtain an order and then collect not only the firearms but any weapons,” Pence said.

“Or, Mike, take the firearms first, and then go to court,” Trump responded.

It is worth highlighting Trump’s statements “from certain individuals deemed to be dangerous.” Who determines who is dangerous? According to a recent manual by the DoD “homegrown violent extremists” isn’t clearly defined, as Activist Post reported last year.

Further, under the Obama administration, the DHS didn’t hesitate to call those who believe in conspiracy theories potential right-wing terrorists, stating the following points might make someone a terrorist in a study by the University of Maryland, which was funded in part by the Department of Homeland Security, according to PJ Media.

Rep. David Cicilline, D-R.I., announced Monday he is introducing the legislation entitled: “Assault Weapons Ban of 2018.” More than 150 Democrats have signed on in support of the legislation, Rep. Ted Deutch, D-Fla., said. (That number since increased to 165 out of 193 serving Democrats at the time of this report.)

Today I joined @RepCicilline and 150+ of my colleagues to introduce the assault weapons ban. It’s time for Congress to listen to the will of a majority of Americans and pass sensible legislation to get these weapons of war off our streets. #NeverAgain #MSDStrong

This comes as a boycott movement DrainTheNRA #BoycottNRA has risen in recent weeks against the National Rifle Association after Nikolas Cruz, 19, opened fire on Parkland, Flordia Marjory Stoneman Douglas high school that left 17 students and teachers dead with more questions than answers still remaining about the deadly shooting.

The head of the National Rifle Association CEO Wayne LaPierre summed up the calls to disarm the American republic at the Conservative Political Action Conference (CPAC.)

“In the rush of calls for more government, they also revealed their true selves. The elites don’t care not one wit about America’s school system and school children. If they truly cared, what they would do is protect them,” he said. “Their goal is to eliminate the Second Amendment and our firearms freedoms.”

“If they truly cared, what they would do is they would protect them. For them, it is not a safety issue. It is a political issue. They care more about control and more of it. Their goal is to eliminate the Second Amendment and our firearms freedoms so they can eradicate all individual freedoms,” LaPierre added. “What they want are more restrictions on the law-abiding. Think about that, their solution is to make you, all of you, less free.”

“As usual, the opportunists wasted not one second to exploit tragedy for political gain,” he said.

In fact, it makes us even less safe when covert deep state operations like Operation Fast Furious, Operation Goldfinger and others have spread unregistered firearms across the U.S. to criminals through illegal arms trafficking.

Disarming law-abiding American citizens by taking away our rights to own a firearm and due process — violating liberty, freedom, and sovereignty granted by the U.S. Constitution — won’t fix any of these affirmed issues.

Instead of pushing for more laws, the ones already in place should be re-examined and enforced; it’s a fact, for example that the FBI was previously aware of the shooter, and that the police department was called to investigate. Both agencies failed to do their jobs, while another cowardly sheriff Deputy Scot Peterson sat in his squad car during the shooting — he has since resigned.

Additionally, let’s add the fact that Cruz not only threatened on YouTube that he was going to go on a shooting, which the FBI failed to act on, but he made similar threats as far back as 2016 on Instagram. Further, Cruz threatened his brother with a gun previously and reports were filed with both the Broward and Palm Beach sheriff’s offices; however, they did nothing, NPR reported.

So there were several failures of protective measures put in place already where officials failed to act; they must take responsibility, instead of passing it off by blaming firearms.

That armed sheriff could have prevented this tragedy, or at least limited its effect, by stepping up to the plate and putting his life on the line to save the kids and being a hero by stopping the gunman with the defensive use of his own firearm.

Meanwhile, the same day, a man armed with a gun did act to stop another potential mass shooting at a church Faith City Mission in Amarillo, Texas. Although, unfortunately, the hero Tony Garces still got shot by the police who responded to the scene, which again shows a lack of training. Then there are other cases legally justified by self-defense: such as citizens shooting home invaders, like this incident that took place in Louisiana recently.

The creation of the firearm might be one of mankind’s worst inventions; although, one could argue that without it we would have been under the control of the British empire, had a much worse Holocaust, and the list goes on and on.

Here are 11 other times that someone with a gun saved people from a shooting compiled by the Washington Times.

In case you didn’t realize, there is already a law against murder, and that doesn’t change the reality of people still committing murder. This was demonstrated by a stabbing in China that killed 33 and injured 130 in 2014, and more recently an attack at a Beijing mall that killed 1 person and injured 12, CBS News reported.

In the gun debate, there is only one video that ever needs to be seen and that’s the Congressional hearing testimony of Suzanna Gratia Hupp, a survivor of the Luby’s shooting, also known as the Luby’s massacre. Which left 23 people dead and injured another 27 when a deeply disturbed man George Hennard, drove his pickup truck through the front window of a Texas restaurant.

It is worth noting in Hupp’s statement, that she stated that she was not a representative of the NRA when she gave her testimony.

The Second Amendment is a right of the people; if you ban sales from lawful citizens, you will encourage black market sales of firearms where the weapons aren’t registered. In such a case, all the criminals will be armed while forcing innocent civilians to be easy targets for a lunatic/lunatics or worse  — tyranny will rise, as history has proven from dictatorship to dictatorship time and time again.

Why would anyone be excited about disarming themselves under any president who shows contempt for the U.S. Constitution and due process, while simultaneously increasing the availability of military weaponry to the nation’s police? Shouldn’t we have learned the lessons of history by now?