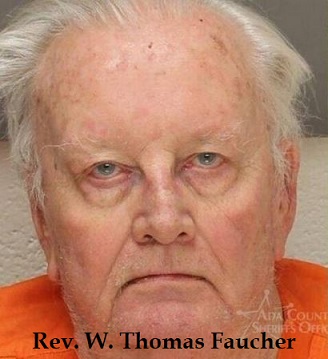 On February 2, 2018, Fr. W. Thomas Faucher, a retired priest from St. Mary’s Catholic Church in Boise, Idaho, who had fought against child sex abuse in the Catholic church, was arrested and booked into the Ada County Jail — charged with ten counts of sexual exploitation of children, two counts of distributing sexually exploitative material involving minors, and with drug possession.

According to a prosecutor, in email and chat conversations viewed by investigators, Faucher had expressed a desire to “rape and kill children”.

After receiving a tip from the National Center for Missing and Exploited Children, authorities obtained a warrant to search Faucher’s rented home, where they found hundreds of images of young children subjected to sexual acts, as well as marijuana, LSD and ecstasy.

A judge set Faucher’s bail at $250,000 during the arraignment hearing, ordered Faucher to have no contact with children, and barred him from accessing the internet.

But his attorney, Mark Manweiler, pressed for Faucher’s release, arguing that despite having been around “tens of thousands” of children in the priest’s more than 40-year career, there has never been a claim of abuse or impropriety — “He is well-liked and well-known. He counts among his good friends people at the highest level of both branches, both of state government and our local government and some judicial officials here in Ada County.”