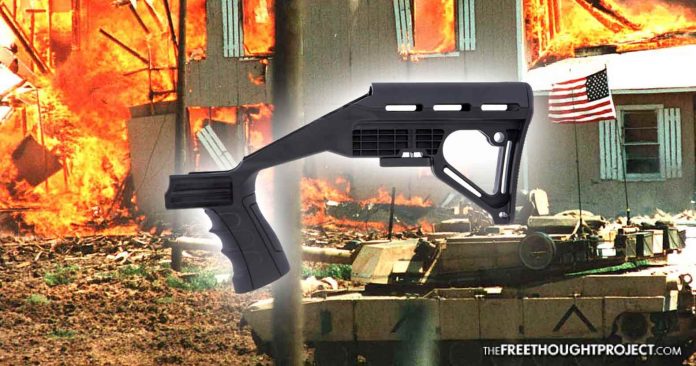 This week, President Donald Trump betrayed his base and Americans in general as he advocated for confiscating guns with no due process.

This blatant attack on the very thing that makes America great, due process, has been in the making since before the Florida shooting, but Trump appears to be striking while the iron is hot.

Earlier this week, president Trump told a group of lawmakers that they must do something to keep guns away from mentally ill individuals – even if that means raising the minimum age for rifle ownership to 21 and making all 18-20 year-olds who have guns, criminals overnight. He is also going after gun parts as well—the bump stock.

When the alleged “conservative” president hops on the gun control train so easily, it is definitely cause for concern. Here’s why.

The US government carried out the deadliest church massacre in history which led to the deaths of 82 men, women, and children. It all came to a violent end 25 years ago in Texas and it all began with allegations of illegal gun parts.

Still, however, the FBI proceeded with investigating other allegations the Branch Davidians had used banned gun parts and converted semi-automatic AR-15 (assault) rifles into fully automatic ones, a violation of federal law. Most of the weapons in the compound were all legal. However, during the subsequent trial, it was reported that 48 of them had been modified to be fully automatic.

Also alleged was that the group was planning a mass suicide. The FBI concluded, “no information has been developed to verify the accuracy of the allegations.” Still, the FBI put local law enforcement on notice.

Despite having no concrete evidence Koresh, who some have said was delusional, had violated anyone’s civil rights, or abused any children, the investigation into the weapons violations continued. The Bureau of Alcohol, Tobacco, Firearms and Explosives pursued the allegations the group was stockpiling weapons and explosives. According to the ATF,  the bureau found:

To this day, the ATF maintains the fire was, “set by cult members, as law enforcement attempted to force them out by introducing tear gas into the building.” And for years, following the fiery destruction of the compound, the FBI maintained the same storyline.

However, in 1999, then-Attorney General Janet Reno made the following admission, “I am very, very troubled by the information I received this week suggesting that pyrotechnic devices may have been used in the early morning hours on April the 19th, 1993, at Waco. At this time, all available indications are that the devices were not directed at the main wooden compound, were discharged several hours before the fire started, and were not the cause of the fire. Nonetheless, it is absolutely critical that we do everything humanly possible to learn all the facts as accurately as possible and make them available to the public and Congress.”

Those facts, according to some of the survivors of the fire, who were inside at the time the fire broke out, are undeniable. They are convinced the government used incendiary devices to set ablaze the tear gas which had been pumped into the building. And they’re not alone.

According to CBS News, “Independent filmmaker Michael McNulty came upon some evidence that appeared damaging to the government. He found a shell casing from a certain type of tear gas round that could start a fire – a device the Justice Department had denied using for more than six years – publicly and to Congress.”

That shell casing led to Reno’s acknowledgment, but the government still has not taken full responsibility, as Reno denied the devices were used to penetrate the building. Questions still remain as to why they would be used at all.

Even though it was later determined Koresh had, indeed, molested children, and was by all intents and purposes a pedophile of the worst kind, the fact remains. The government used gas and allegedly fired on its own people which either directly or indirectly led to the deaths of 76 people — inside a church—over suspicion of illegal gun parts.

None of the dead were ever given due process and Americans have learned very little from the handling of this situation. Sadly, there was no outcry and this incident serves as a brutal reminder of what can happen when the US government makes up its mind to take out those they disagree with.