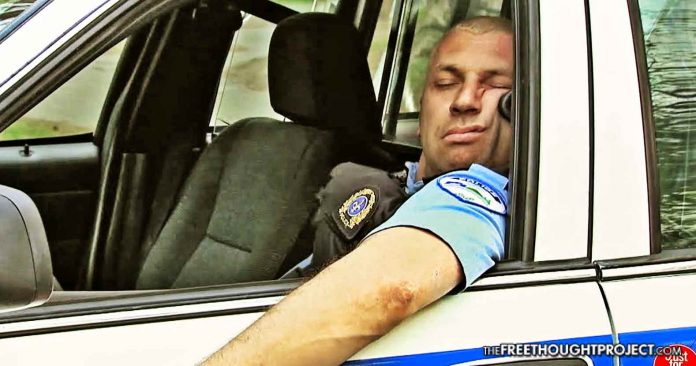 (Rutherford Institute) — In the American police state, police have a tendency to shoot first and ask questions later.

In fact, police don’t usually need much incentive to shoot and kill members of the public.

Police have shot and killed Americans of all ages—many of them unarmed—for standing a certain way, or moving a certain way, or holding something—anything—that police could misinterpret to be a gun, or igniting some trigger-centric fear in a police officer’s mind that has nothing to do with an actual threat to their safety.

So when police in Florida had to deal with a 19-year-old embarking on a shooting rampage inside Marjory Stoneman Douglas High School in Parkland, Fla., what did they do?

There were four armed police officers, including one cop who was assigned to the school as a resource officer, on campus during that shooting. All four cops stayed outside the school with their weapons drawn (three of them hid behind their police cars).

Not a single one of those cops, armed with deadly weapons and trained for exactly such a dangerous scenario, entered the school to confront the shooter.

Seventeen people, most of them teenagers, died while the cops opted not to intervene.

Let that sink in a moment.

Now before your outrage bubbles over, consider that the U.S. Supreme Court has repeatedly affirmed (most recently in 2005) that police have no constitutional duty to protect members of the public from harm.

According to the U.S. Supreme Court, police have no duty, moral or otherwise, to help those in trouble, protect individuals from danger, or risk their own lives to save “we the people.”

In other words, you can be outraged that cops in Florida did nothing to stop the school shooter, but technically, it wasn’t part of their job description.

This begs the question: if the police don’t have a duty to protect the public, what are we paying them for? And who exactly do they serve if not you and me?

Why do we have more than a million cops on the taxpayer-funded payroll in this country whose jobs do not entail protecting our safety, maintaining the peace in our communities, and upholding our liberties?

Why do we have more than a million cops who have been fitted out in the trappings of war, drilled in the deadly art of combat, and trained to look upon “every individual they interact with as an armed threat and every situation as a deadly force encounter in the making?

It’s the same reason why the Trump Administration has made a concerted effort to expand the police state’s power to search, strip, seize, raid, steal from, arrest and jail Americans for any infraction, no matter how insignificant.

It is fast becoming a government “of the rich, by the elite, for the corporations,” and its rise to power is predicated on shackling the American taxpayer to a life of indentured servitude.

Cops in America may get paid by the citizenry, but they don’t work for us.

They don’t answer to us. They’re not loyal to us.

And they certainly aren’t operating within the limits of the U.S. Constitution.

That “thin, blue line” of loyalty to one’s fellow cops has become a self-serving apparatus that sees nothing wrong with advancing the notion that the lives—and rights—of police should be valued more than citizens.

The myth of the hero cop really is a myth.

Cops are no more noble, no more self-sacrificing, no braver and certainly no more deserving of special attention or treatment than any other American citizen.

This misplaced patriotism about police and, by extension, the military—a dangerous re-shifting of the nation’s priorities that has been reinforced by President Trump with his unnerving knack for echoing past authoritarian tactics—paves the way for even more instability in the nation.

Welcome to the American police state, funded by Corporate America, policed by the military industrial complex, and empowered by politicians whose primary purpose is to remain in office.

It’s a short hop, skip and a jump from the police state we’re operating under right now to a full-blown totalitarian regime ruled with the iron fist of martial law.

The groundwork has already been laid.

The events of recent years have only served to desensitize the nation to violence, acclimate them to a militarized police presence in their communities, and persuade them that there is nothing they can do to alter the seemingly hopeless trajectory of the nation.

The sight of police clad in body armor and gas masks, wielding semiautomatic rifles and escorting an armored vehicle through a crowded street, a scene likened to “a military patrol through a hostile city,” no longer causes alarm among the general populace.

Few seem to care about the government’s endless wars abroad that leave communities shattered, families devastated and our national security at greater risk of blowback. Indeed, there were no protests in the streets after U.S. military forces carried out air strikes on a Syrian settlement, killing 25 people, more than half of which were women and children.

And then there’s President Trump’s plans for a military parade on Veterans Day (costing between $10 million and $30 million) to showcase the nation’s military might. Other countries that feel the need to flex their military muscles to its citizens and the rest of the world include France, China, Russia and North Korea.

The question is no longer whether the U.S. government will be preyed upon and taken over by the military industrial complex. That’s a done deal.

It’s astounding how convenient we’ve made it for the government to lock down the nation.

Mind you, by “government,” I’m not referring to the highly partisan, two-party bureaucracy of the Republicans and Democrats.

As I point out in my book Battlefield America: The War on the American People, I’m referring to “government” with a capital “G,” the entrenched Deep State that is unaffected by elections, unaltered by populist movements, and has set itself beyond the reach of the law.

I’m referring to the corporatized, militarized, entrenched bureaucracy that is fully operational and staffed by unelected officials who are, in essence, running the country and calling the shots in Washington DC, no matter who sits in the White House.

This is the hidden face of a government that has no respect for the freedom of its citizenry.

Constitutional attorney and author John W. Whitehead is founder and president of The Rutherford Institute. His new book Battlefield America: The War on the American People (SelectBooks, 2015) is available online at www.amazon.com. Whitehead can be contacted at [email protected].