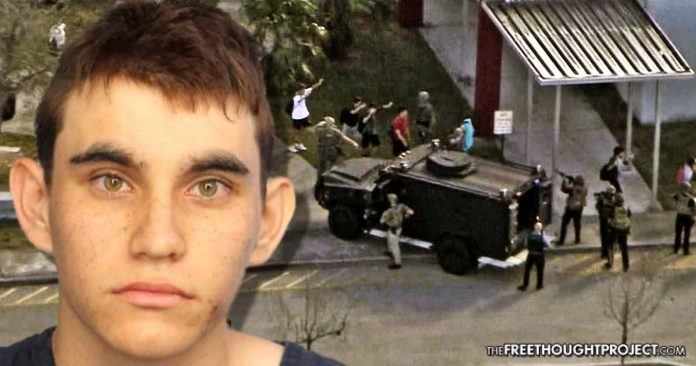 Parkland, FL — In the weeks since the tragic shooting occurred in Parkland, Florida, we have learned that cops cowered outside instead of helping, the police and FBI were all warned on multiple occasions that the alleged shooter, Nikolas Cruz, told people he was going to shoot up the school, nearly two dozen people reported Cruz for death threats, and first responders were told to stand down. Now, we are finding out that the surveillance footage from the school — which the public has a right to see — is being deliberately kept secret by the Broward county sheriff — which many say is illegal.

Broward county sheriff Scott Israel, who has already been caught contradicting the official story, is claiming that the surveillance footage must remain secret.

The South Florida Sun Sentinel, the Miami Herald and CNN have filed an open records lawsuit against the Israel and school Superintendent Robert Runcie for their role in this secrecy.

Officials claim that the video is exempt from Florida sunshine laws because its release would somehow put lives at risk and expose the district’s security system. However, as the NY Post reports, this is not true.

First, disclosure of the videos would pose no danger to students because Building 12, where the shooting took place, will be demolished.

Second, key investigative records, transcripts and logs in the active criminal probe against the Parkland school shooter have already been released to the public. Israel himself coughed up call logs documenting 23 times the shooter’s family or neighbors called deputies to the house. Additional dispatch records obtained by local and national media outlets revealed 22 more calls to law enforcement dating back to 2008 that had not been initially communicated by the selectively disclosing sheriff.

Moreover, the open-records lawsuit notes that Israel has already publicly described in detail what the video shows about Peterson’s actions: He arrived at the west side of Building 12, took position, got on his radio, had a view of the western entry of Building 12 but never went in for “upwards of four minutes” while the shooter slaughtered 17 innocent students and teachers.

By refusing to release the video, police are creating an environment that fosters distrust, and rightfully so.

In case after case of “terror” attacks in the United States, the surveillance footage is immediately released in almost every incident. However, in Parkland and Las Vegas — two shootings that have been surrounded by controversy and cover ups — the public has seen nothing.

Within hours of a terrorist attack in New York city, the surveillance footage of Akayed Ullah walking into the underground tunnel between Times Square and the Port Authority Bus Terminal and detonating a crudely-made pipe bomb was released.

Before that, a suspect, identified as Sayfullo Habibullaevic Saipov, rented a pickup truck, drove it onto a busy bicycle path and mowed down innocent people before getting out and brandishing toy guns. Almost immediately after the horrific attack that left 8 dead and a dozen more injured, video of Saipov, an Uzbekistan native, was released.

It has been months since the attack in Vegas and officials have yet to release a single still image of Stephan Paddock in the Mandalay Bay Casino. This is in spite of the thousands of cameras both inside and outside of the casino.

Now, it appears, this same secrecy and cover up is going to happen in Parkland. Hopefully, for the sake of the victims and their families, and in the interest of the public, the lawsuits will resolve successfully, and the evidence will be released — even if it is damning to the image of the Broward sheriff. Indeed, the Broward Circuit court agrees.

“If there were shortcomings,” Broward Circuit Court Judge Charles Greene concluded, “the public has the right to know.”