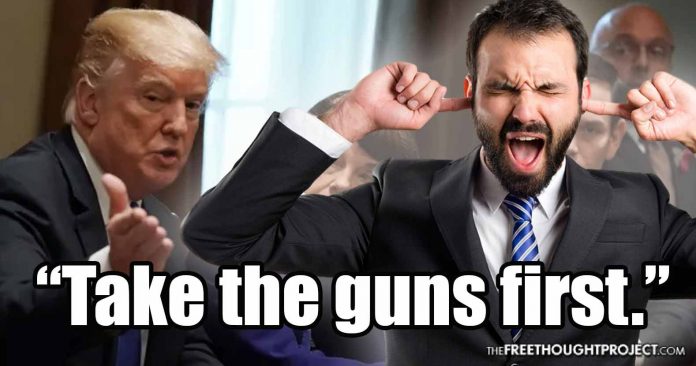 This week, President Donald Trump betrayed his base and Americans in general as he advocated for confiscating guns with no due process.

This blatant attack on the very thing that makes America great, due process, has been in the making since before the Florida shooting, but Trump appears to be striking while the iron is hot. And his supporters couldn’t care less.

Earlier this week, president Trump told a group of lawmakers that they must do something to keep guns away from mentally ill individuals – even if that means raising the minimum age for rifle ownership to 21 and making all 18-20 year-olds who have guns, criminals overnight. He is also going after gun parts as well.

His attack on the Constitution has gotten him praise by the left and is met with silence by his supporters who are conducting mental gymnastics to praise this man who is calling for the removal of due process.

How can people claim to be pro-gun rights and pro-liberty while simultaneously cheering on a puppet in the White House house who is opposed to both?

The answer to that question is the two-party paradigm.

For the majority Americans, the United States political system is seen as a football game. Any time their party is in power, it’s as if they are ‘winning’ and the other party or team is ‘losing.’ But what most Americans fail to see is that both ‘teams’ have the same owner. That owner cares not about which one of their teams is ‘winning,’ just so long as its one of their teams in the game.

This ‘owner’ of the teams is not a single person, nor a single corporation, or focus group, or think tank. Despite the best efforts of Alex Jones and the like, the owners of government cannot be nailed down to just a few old rich men. This is because the owners can be anyone.

The US political system is set up in such a manner that it allows for anyone with enough money to steer policy that benefits them personally. Politicians are hardly particular when it comes to who’s throwing money at them, so ownership is constantly in a state of flux.

The controlled politicians, the rigged system, and the elite are not some vast conspiracy as much as they are a tendency of the state in general. As long as a system exists that allows government force to be bought and sold for the benefit and privilege of a few, these atrocities will continue.

The money shoved into the pockets of politicians on behalf of special interest groups, aka bribery, has become so mainstream and widely accepted that no one even bats an eye at the billions doled out to their elected officials on behalf of lobbyists.

Republicans and Democrats alike sit back in their plush, taxpayer funded offices in white marble buildings, rubbing elbows with elite businessmen who pay them to write laws that create unfair advantages for their industries. In the extremely rare case that a politician resists this corruption and refuses to conform, they are ridiculed by fellow lawmakers, painted as kooks by the MSM, and their supporters labeled as radical nutjobs.

Meanwhile, We The People argue over the various privileges granted, and how much of our paychecks can be stolen by the almighty rulers on high.

The reason it’s so hard for people to break out of their two-party shells and see that there are no differences between politicians with a ‘D’ and politicians with an ‘R,’ is a complex one. However, much of the reason we refuse to see things as they are is that humans have a naturally tribalistic tendency. Democrats and Republicans know and employ multiple techniques to keep you on their team, aka tribe.

The main technique used is ‘Us vs. Them’ manipulation. Constantly pointing out the flaws of the perceived ‘them’ group makes the ‘us’ group easily dismiss logical information without applying any critical thought. This is how both Democrats and Republicans can pass freedom shattering police state laws and call for the removal of due process, bipartisanly, and the masses continue to support their party. All the blame from such horrid policy is easily written off and passed on to the “other guy.”

This method of ridicule invokes the “Black and White” constraint of thinking; there are only two choices, and one is detrimental while the other is our savior. MSM and politicians love this constraint on your mind because they can simply convince you that you must go their way, and not with this utterly ridiculous choice.

In the meantime, however, Republicans are for big government, if with war, and the democrats are for war, if with big government. And, the only “change” people see is their dwindling bank accounts.

Seeing outside of the two-party paradigm is a difficult task. It can take years for people to break their conditioning and see the political system for the rigged game that it is.

The good news is that once you see the system for what it is, you cannot unsee it. No one goes back to sleep, despite the fact that waking up to the system can be particularly stressful.

The number of people waking up to the controlled two-party system is ever-increasing and those people, in turn, wake up others.

If you are one of those people who sees Washington DC as the Don King boxing match that it is, then you are doing something right. You are likely a reader of the alternative media, you probably don’t watch massive amounts of television, and you likely have a thirst for a lesser ignorance.

If you are accused of being a liberal and a conservative in the same conversation, it’s probably because you have broken free from the cult-like constraints placed on you by the system.

However, only waking up is not enough. If you want to affect positive change in this world, then you have to become that change. This doesn’t mean that you have to go out, buy a bullhorn and begin screaming in the streets.

Simply changing your purchasing habits can force a change far greater than any bullhorn. Voting with your dollars is far more effective at inciting change than a voting booth.

The radical and peaceful change that society needs will most assuredly not originate from the center of the very system that is designed to prevent it.

You can quite literally ‘be the change that you want to see in this world,’ and you can start this now.

Do not be discouraged by the establishment who attempts to silence your radical and peaceful views and keep them on the fringe. They do it out of fear, it’s merely an act of self-preservation and it shows that open-mindedness and peace are overcoming cruelty and ignorance. Always remember, no army can stop an idea whose time has come.

Share this article with your friends who have broken free from political labels and let them know they are doing it right!