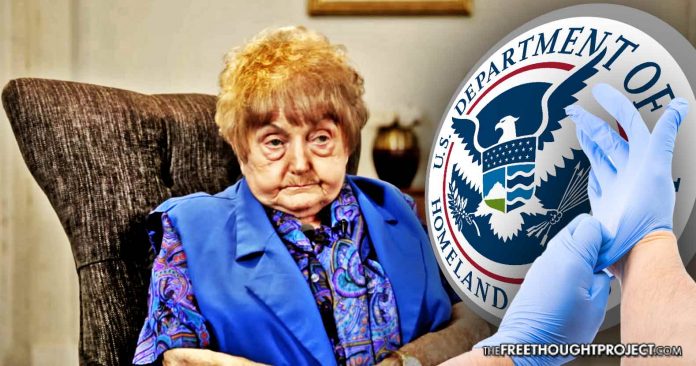 The TSA is, without a doubt, one of America’s most corrupt and incompetent agencies whose ostensible job is fighting terrorism. However, last year, they became apparently so unsatisfied with the mere ability to strip search babies, remove colostomy bags, beat up blind cancer patients, and fondle your genitalia,that they announced a more invasive physical pat-downs. The pat-downs, which TSA warned would probably prompt assault complaints with the police department because of their invasive nature, have been implemented and an 84-year-old holocaust survivor has become the TSA’s latest victim.

Eva Mozes Kor exposed her abuse by TSA in a Tweet on Sunday, explaining how she was forced to undergo a “very demeaning body search” just to board a plane. In her Tweet, she drew a parallel with the TSA and Auschwitz.

Kor was traveling back home after giving a lecture on the horrors of Auschwitz when she said she was able to survive being in a concentration camp but could barely survive the abuse she suffered at the hands of TSA.

“Another very demeaning body search by the TSA – there has to be some way that at age 84 I can get some clearance by the POWERS of Government from this procedure. As I lecture about surviving Auschwitz I barely survive the TSA body search I detest it. That ruined my experience,” wrote the 84-year-old.

Another very demeaning body search by the TSA – there has to be some way that at age 84 I can get some clearance by the POWERS of Government from this procedure. As I lecture about surviving Auschwitz I barely survive the TSA body search I detest it. That ruined my experience

During her time in Auschwitz, Kor was only 10-years-old and was forced to undergo horrifying experiments at the hands of Josef Mengele. Mengele was a member of the team of doctors responsible for the selection of victims to be killed in the gas chambers and for performing deadly human experiments on prisoners.

Along with her twin sister Miriam, Kor was subjected to human experimentation under Mengele at Auschwitz. She lost both of her parents and two older sisters to the Holocaust; only she and Miriam survived. Kor founded the organization CANDLES (an acronym for “Children of Auschwitz Nazi Deadly Lab Experiments Survivors”)in 1984 and through the program, she has located 122 other survivors of Mengel.

She is a celebrated author and activist who has been advocating for peace by lecturing on the horrifying nightmare that happened to her and her sister during war.

When she draws a parallel between Auschwitz and the TSA, America would do well to listen and remember history.

As TFTP has reported in the past, the TSA cares not about laying waste to your personal space and molesting anyone who comes in their path. They can do all of these things because they are legal.

Legality, as TFTP has constantly pointed out, does not equal morality. When 84-year-old holocaust survivors are abused so bad they don’t want to fly anymore, it may be time to question this legality.

As for Kor, after her tweet garnered the attention of the government agency who she says groped her so badly that she barely survived, she appears to be handling the problem on her own.

“Thank you everybody for caring about me and my stress left from Mengele’s experiments. I have been contacted by the TSA to help me and they are working with me to solve this problem,” Kor said.

Thank you everybody for caring about me and my stress left from Mengele’s experiments. I have been contacted by the TSA to help me and they are working with me to solve this problem. I fly tomorrow to Los Angeles to lecture this problem will be solved-thank you very much! Eva Kor pic.twitter.com/sSwi0XjZfO

As to how this 84-year-old woman can forgive those who caused her harm just days before, her secret lies in a special kind of forgiveness.