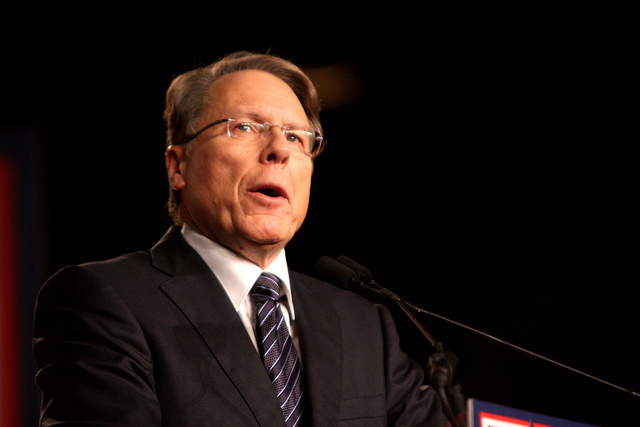 The NRA has seen a massive surge in membership interest according to the latest charts from Google Trends.

Google searches for ‘NRA membership’ have risen roughly 4,900 per cent since the week before the February 14 shooting, with new members flocking to support the gun owners’ rights group.

NRA President Wayne LaPierre announced last May that national membership had reached five million, but the group has not commented on the recent surge and didn’t immediately reply to calls from DailyMail.com on Sunday.

Though high-profile mass shootings often spur an increase in gun sales over fear of a crackdown, the Parkland shooting was different in the focus of vitriol that was directed at the NRA.

Some otherwise casual gun rights supporters said that the loud attacks on the NRA in the media by young Parkland survivors such as David Hogg drove them to sign up.

‘Thank you David Hogg for inspiring me,’ one Twitter user wrote. ‘I gifted my husband with an NRA membership. I felt now was an important time to support them,’ she continued, adding a screenshot of the membership confirmation email. Representatives from over a dozen gun rights organizations and shooting associations in California, Connecticut, Florida, Georgia, Illinois, Massachusetts, Missouri, New York, Nevada, New Hampshire, South Carolina, Texas and Virginia told TIME they have seen membership rise since the Feb. 14 shooting left 17 dead at Marjory Stoneman Douglas High School. And two people familiar with the workings of the NRA, who spoke on condition of anonymity because they weren’t authorized to discuss membership numbers, said that since the shooting the NRA has also seen more people than usual join, renew memberships or donate money as President Donald Trump and other Republican Party leaders have signaled an openness to gun control policies that are anathema to the powerful group. A spokesperson for the NRA, which says on its website that it has more than five million members, didn’t respond to requests for comment.

“As soon as anti-gun attacks started coming in on Twitter, Facebook, and in the media, we began to hear from people who didn’t even own guns who wanted to join up or contribute out of solidarity in defense of the Second Amendment to the Constitution,” said Patrick Parsons, who heads the Georgia Gun Owners, an independent gun rights organization in Georgia. Parsons said the group’s membership, which he estimated at 13,000, had increased by 1,000 over the past two weeks, and that he had been “working around the clock taking calls, answering emails from interested people, sending out new member packets.”

Dudley Brown, the president of the National Association for Gun Rights, estimated his organization — which claims more than 4.5 million “members and supporters” on its website — estimated online membership applications at his organization could have grown by 30% over the last week, a number he expected to rise after Trump this week called for comprehensive gun reform legislation, including raising the age limit for buying certain weapons to 21. The Connecticut Citizens Defense League, which has a membership of almost 29,000 people, said it typically gets 15 or 20 applications a week, but received almost 200 in the last week. Gun Owners of America, which says it has 1.5 million members, amassed “hundreds” of new members in the last week, according to an official at the organization familiar with membership numbers who spoke on condition of anonymity. The organization said it has seen it’s membership grow by thousands since the Las Vegas shooting last October. Don Turner, the President of the Nevada Firearms Coalition and NRA member, estimated membership renewals and requests had increased by 20 percent at his organization since Parkland, although this is an increase he said he did not witness after the shooting in Las Vegas.

This whole gun control push has been based on total lies.

As The Conservative Treehouse reported last month, the Broward County Sheriff’s Office likely didn’t follow-up on anything “Nikolas Cruz” was doing because they embarked on a radical social engineering agenda to try and bring the arrest rates of black and Hispanics in line with those of whites and Asians.

“Initially the police were excusing misdemeanor behaviors. However, it didn’t take long until felonies, even violent felonies (armed robberies, assaults and worse) were being excused,” The Conservative Treehouse reported. “The need to continue lowering the arrests year-over-year meant that increasingly more severe unlawful behavior had to be ignored. Over time even the most severe of unlawful conduct was being filtered by responding police.”

The Parkland shooter was only allowed to carry out his massacre because the Broward County Sheriff’s office under Sheriff Scott Israel ignored a decade of warnings about his erratic behavior and potentially even stood down during the shooting rather than immediately engage the shooter, as is standard protocol nationwide.

The Miami Herald reported over the weekend that Israel is now trying to hide videos of his deputies’ actions from the public.

As I reported last week, the latest polls show the majority of Americans blame government failure, not guns for the shooting.