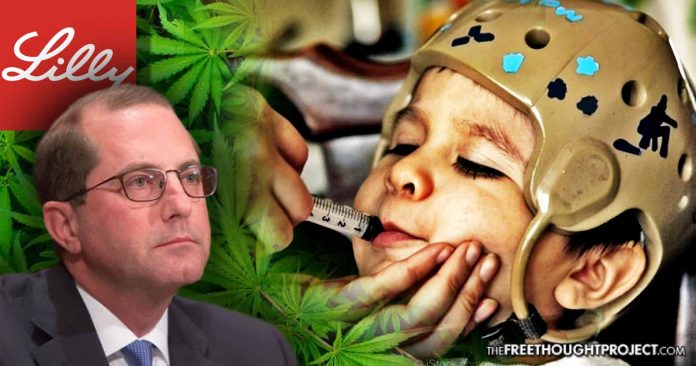 The United States Health Secretary was quick to claim that there is “no such thing as medical marijuana,”but he also admitted that the U.S. plans to spend more than $750 million searching for a pharmaceutical alternative for opioids next year—a treatment cannabis provides naturally

U.S. Health and Human Services Secretary Alex Azar made the statement during a press conference on opioids in Ohio, and his commentary left little room for the possibility that the federal government will reclassify cannabis and acknowledge its medicinal value anytime soon.

“There really is no such thing as medical marijuana,” Azar said. “There is no FDA-approved use of marijuana, a botanical plant. I just want to be very clear about that.”

Azar went on to reveal that in addition to refusing to consider cannabis as a treatment, the government plans to pour hundreds of millions of taxpayer dollars into finding a pharmaceutical alternative for pain medications, now that an alarming number of Americans are dying from opioid-induced overdoses, and local governments are starting to hold Big Pharma accountable for its role in the epidemic.

“We are devoting hundreds and hundreds of millions of dollars of research at our National Institutes of Health as part of the historic $13 billion opioid and serious mental illness program that the president and Congress are funding,” Azar said. “Over $750 million just in 2019 alone is going to be dedicated towards the National Institutes of Health working in public-private partnership to try and develop the next generation of pain therapies that are not opioids.”

More than $750 million will be dedicated to creating a pharmaceutical alternative for opioids in 2019, all while research studies have shown that the treatment can be provided naturally by a plant that the federal government has spent decades trying to demonize.

A study published in August 2017 found that when participants used cannabidiol (CBD), it actually blocked the opioid reward in their brains, and as a result, “The finding that cannabidiol blocks opioid reward suggests that this compound may be useful in addiction treatment settings.”

Additionally, the government’s own National Institute on Drug Abuse has stated that “Medical marijuana products may have a role in reducing the use of opioids needed to control pain.” Studies have also shown that deaths from opioids plummet in states where cannabis is legal and that 80 percent of cannabis users give up prescription pills.

In the same way that FDA Commissioner Scott Gottlieb has ties to pharmaceutical companies that have influenced his decisions while in office, Health and Human Services Secretary Alex Azar was formerly the president of the U.S. division of Eli Lilly & Co. from 2012 to 2017.

During his tenure at Eli Lilly, Azar oversaw experiments in which, when looking to extend the exclusive patent on the erectile dysfunction drug Cialis, the company used it on young boys with Duchenne muscular dystrophy. While it did nothing for the patients, it helped the company to increase their bottom line profits, and to ensure that the patent would be extended for another six months.

Azar’s claim that cannabis has no medicinal value because the FDA has chosen to blatantly ignore a wealth of research that proves its value is laughable. In addition to pain management, cannabis has been shown to provide treatment in a number of areas, with research studies showing its ability to kill cancer cells, to help prevent HIV from becoming AIDS, to work as a “miracle” treatment for children with autism, and to significantly reduce seizures from epilepsy in 90 percent of patients.