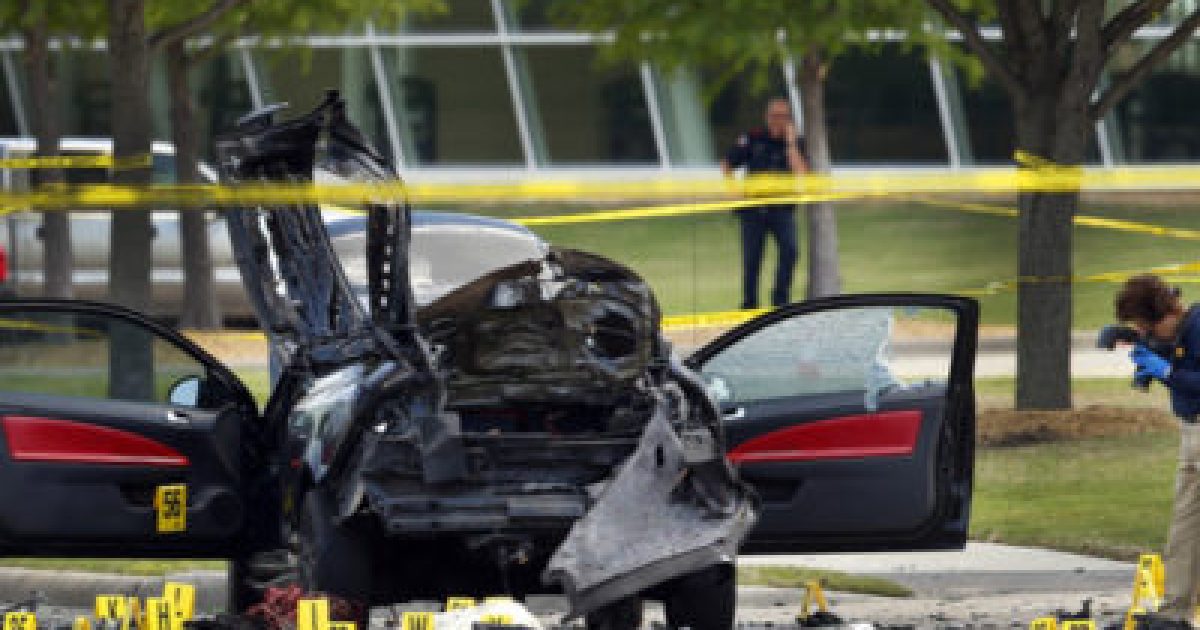 The Judge could grant dismissal of the lawsuit. So it is pointless to ask about our alleged role in the jihad attack, says the Federal Bureau of Investigation in its own defense, through its mouthpiece, the Department of Justice.

But the FBI failed to state a court rule, statute or “good cause” to prevent all discovery, responds the Plaintiff.

This lawsuit’s allegations are detailed in a previous article on the Geller Report here.1

Arguments concern whether to immediately conduct discovery – interrogatories, requests to produce, depositions, etc. – concurrent with a pending Motion to Dismiss. The following are excerpts of the USA / FBI’s Motion 2 and Memorandum [DM/pg];3 Plaintiff’s Response [PR/pg];4 and the USA / FBI’s Reply [DR/pg].5

The Motion seeks “to relieve the parties from the reporting requirements set forth in the Court’s order dated January 16, 2018…, to abstain from entering a scheduling order, and for a stay of discovery while the United States’ motion to dismiss … is pending.”

“Plaintiff alleges that he was shot in the leg while working as a security guard at an event called the ‘First Annual Muhammad Art Exhibit and Contest’ at the Curtis Culwell Center in Garland, Texas on May 3, 2015 (‘the event’). The shooting occurred when Elton Simpson and Nadir Soofi, whom Plaintiff describes as ‘two members of the international terrorist organization ISIS,’ attempted to carry out a mass-shooting at the event.” [DM/1-2]

“[A]s a practical matter, it is especially difficult (and unnecessary) at this juncture for case management deadlines to be set, given that the parties’ briefing on the sovereign immunity issue is not yet complete and it is thus unknown when the issue will be resolved … If the motion [to dismiss] is granted, then the need for a scheduling order will no longer exist. Alternatively, if the motion is denied or granted in part, this Court’s ruling may reduce the number of claims and narrow the scope of discovery.” [DM/4]

“Staying discovery in this action while the motion to dismiss is pending is more than simply appropriate – it is necessary to preserve the United States’ sovereign immunity.” [DM/5]

“A stay of discovery is especially justified here given the nature of the information likely to be sought during discovery by Plaintiff. On its face, the Complaint makes clear that it challenges alleged Government conduct [the FBI] taken during the course of a national security counterterrorism investigation. As such, there is a strong likelihood that much of the information Plaintiff will seek from the FBI is classified and law enforcement sensitive information over which the Government will assert claims of privilege to prevent its disclosure. To be sure, in pending federal criminal proceedings related to the events at issue in this case, the Government continues to protect such information from disclosure.” [DM/6-7]

The counter-terrorism investigation, particularly concerning the jihad attack here, has resulted in criminal proceedings against three defendants: (1) Erick Jamal Hendricks, who will be tried in March, 2018;6 (2) Abdul Khabir Wahid, who will be tried in May, 2018;7 and (3) Abdul Malik Abdul Kareem, who was convicted in February, 2017, but he has a pending appeal.8

“The purpose of pre-dismissal discovery is to find factual support for a plaintiff’s argument that the conduct at issue is not discretionary, and thus not covered by the discretionary function exception.” [PR/7, fn1]

“If Congress had intended for a stay on discovery to be imposed anytime Defendant raises the discretionary function exception in a motion to dismiss, then some federal rule [of court procedure] or statute would say so.” [PR/8]

“Given that no Scheduling Conference has even been held, and no discovery requests have even been sent, Defendant’s Motion to Stay is premature–as it cannot yet determine whether it will suffer ‘annoyance, embarrassment, oppression, or undue burden or expense’ by proceeding as usual. If Defendant receives specific discovery requests that are oppressive or pose an undue burden to respond to–then Defendant can object to those particular requests. Defendant is also free to invoke privilege when any information requested by Plaintiff is subject to privilege. But insisting on a blanket stay of all discovery–when no good cause has been definitively demonstrated–goes too far. Defendant has not met its ‘heavy burden’ and demonstrated good cause to sidestep the general rule in favor of discovery.” [PR/5-6]

“Even if the Court were to find some merit in Defendant’s Motion to Dismiss, Plaintiff would likely be allowed an opportunity to amend its pleadings to cure any defects.” [PR/6]

“The burden of going through the painstaking process of reviewing such materials in response to a discovery request is, quite frankly, self-evident. Placing such a burden on the FBI, which already bears a heavy workload dealing with discovery in numerous legal actions throughout the country as well as Congressional requests, is the very sort of intrusion into sovereign immunity that should be avoided until the threshold legal issues are decided.” [DR/2].

U.S. Taxpayers are owed explanations for the FBI’s alleged action or inaction

What do the majority of mass shootings have in common? All levels of government, particularly the FBI, apparently did not “connect the dots” and therefore “dropped the ball” to prevent the attacks.

Hypothetical: Entrapment is not a defense when the perpetrator was predisposed to commit the crime. However, consider: Is an undercover law enforcement officer considered a co-conspirator if his words originate the crime, and his acts contribute to the crime?

As this Complaint alleges:

“[On] (May 2, 2015), Hendricks and UCE-1 again chatted online about the upcoming Garland event. Hendricks wrote, ‘I wish someone could go to tx and harass them during the night;’ ‘a good solid protest;’ and ‘Unique one man protest.’ After Hendricks explained that he was unable to go because he was on the no-fly list and it was ‘too much driving,’ UCE-1 then volunteered to go. UCE-1 then asked, ‘Just me or any other brothers?’ Hendricks responded, ‘See what you and bro [Simpson] can do,’ and added that Simpson ‘has another brother he knows’ (presumably Soofi). Hendricks then provided ICE-1 with Simpson’s alternate Twitter contact.” [Complaint ¶ 34].

Assume the above is true and consider: But-for the FBI’s undercover agent effectively having “green-lighted” the attack, and offered himself to go and facilitate it, would there have been a jihad attack in Garland, Texas? If not, then Plaintiff – a security guard – would not have been shot, and suffer emotional distress.

President Obama did more than seek to protect Islam as a minority religion in the United States. His words and deeds advocated for, and promoted, Islam.

The Department of Justice, and the Federal Bureau of Investigation, are under the Executive branch. The FBI ostensibly has provided briefings to the President. Using every scandal’s inquiry: What did President Obama know, and when did he know it?

Gerald Lostutter is a Florida licensed attorney, college professor, and journalist. He has worked in the print and broadcast media. His comedy can be heard on Central Florida Radio. Scroll down to WDBO-AM 580, and WMEL-AM 920.

1 Joiner v. United States of America, Civil docket: 3:17-cv-02692-M, U.S. District Court for the Northern District of Texas (Dallas); Filed Oct. 2, 2017. This public record is online as a summary via Justia, and accessible via Pacer. The latter will require the User’s account, and possible costs.

2 Defendant United States of America’s Motion for Relief from Order Requiring a Scheduling Conference and Report and For a Stay of Discovery (01-30-18).

3 Memorandum in Support of Defendant United States of America’s Motion for Relief from Order Requiring a Scheduling Conference and Report and For a Stay of Discovery (01-30-18).

4 Plaintiff’s Response in Opposition to Defendant’s Motion for Relief from Order Requiring a Scheduling Conference and Report and For a Stay of Discovery (02-16-18).

5 Reply to Plaintiff’s Opposition to Defendant United States of America’s Motion for Relief from Order Requiring a Scheduling Conference and Report and For a Stay of Discovery (03-01-18).