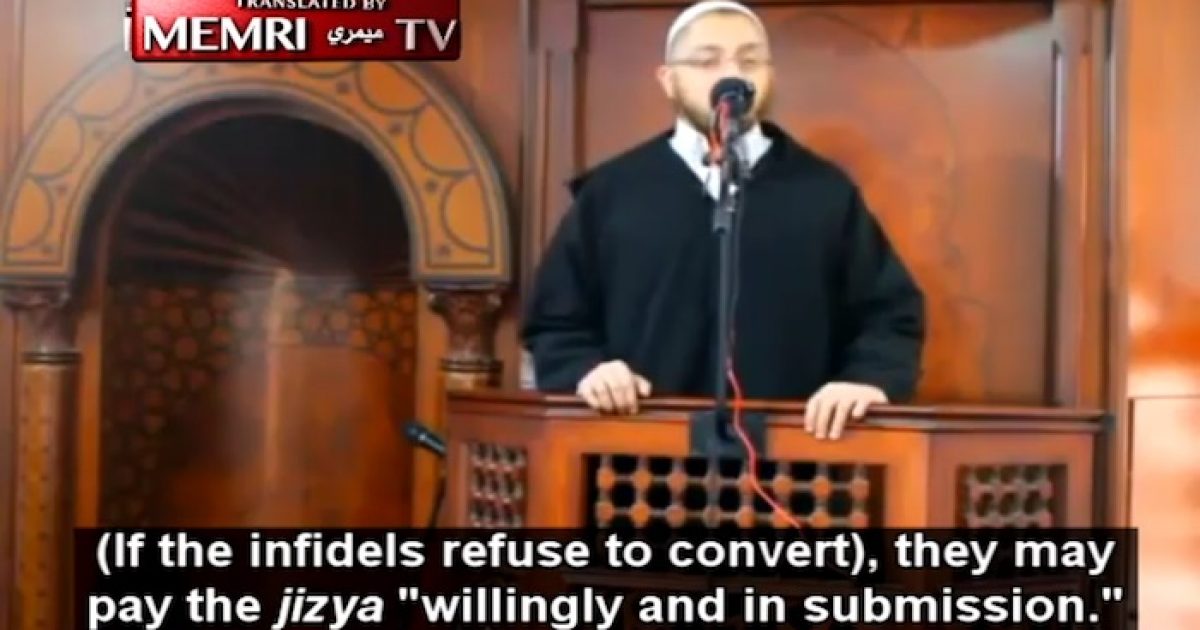 Will Muslim spokesmen in the West denounce this call as un-Islamic, or remain silent about it? I’m betting the latter, in light of passages like these that make it clear that al-Qadi is speaking in complete accord with the Qur’an and Islamic law:

“Fight those who do not believe in Allah or the Last Day, and do not forbidden what has been forbidden by Allah and His Messenger, and do not acknowledge the religion of Truth, even if they are of the People of the Book, until they pay the jizya with willing submission, and feel themselves subdued” (Qur’an 9:29).

“Fight against those who disbelieve in Allah. Make a holy war…When you meet your enemies who are polytheists, invite them to three courses of action. If they respond to any one of these you also accept it and withhold yourself from doing them any harm. Invite them to (accept) Islam; if they respond to you, accept it from them and desist from fighting against them…. If they refuse to accept Islam, demand from them the Jizya. If they agree to pay, accept it from them and hold off your hands. If they refuse to pay the tax, seek Allah’s help and fight them.” (Sahih Muslim 4294)

In a Friday sermon delivered in El Bagour, Egypt, Dr. Abu Bakr Al-Qadi called to wage Jihad against the infidels in their own lands. Stressing that he was not talking only about defensive Jihad, he said: “I am talking about seeking out the infidels on their own turf,” and, if they refuse to convert to Islam, imposing the jizya poll tax on them or fighting them “until the word of Allah reigns supreme.” “Islam alone should rule the world,” said Al-Qadi. The sermon, delivered in the Ubad Al-Rahman Mosque in El Bagour, was posted on December 17, 2017 on a YouTube channel dedicated to the mosque’s sermons.

Following is a transcript:

Abu Bakr Al-Qadi: Allah is putting the Islamic nation to a test, so that it will emerge from these birth pangs as a nation worthy of a pioneering leadership role, a nation that will lead the other nations and will become the best among them, through its Jihad for the sake of Allah, and through its commanding good and forbidding evil. [The Quran says:] “You are the best nation produced for mankind”. The Quran does not tell us to sit at home, to isolate ourselves from the world like dervishes, and to interpret our religion as nothing but prostrations of prayer, rites, and ceremonies. Rather, this nation will achieve superiority by going out to the people, by commanding good and forbidding evil not only in its own land, but by going out and waging Jihad. I am not talking here about defensive Jihad – about merely fending off the enemies from [Muslim] mini-states, lands, and sanctities. I am talking about seeking out the infidels on their own turf, calling them to believe in Allah, and giving them the option to convert to Islam. “There is no compulsion in religion. The right path is henceforth distinct from error.” [If the infidels refuse to convert], they may pay the jizya “willingly and in submission”. Otherwise, they should be fought until the word of Allah reigns supreme, until religion in its entirety belongs to Allah, and until there is no more fitna – or polytheism – ruling the world. Oh servants of Allah, Islam alone should rule the world.

The Prophet Muhammad said: Judgment Day will not come until the Muslims fight the Jews, and the Jews hide behind trees and stones, and the trees and stones say: “Oh Muslim, oh servant of Allah, there is a Jew behind me. Come and kill him”….