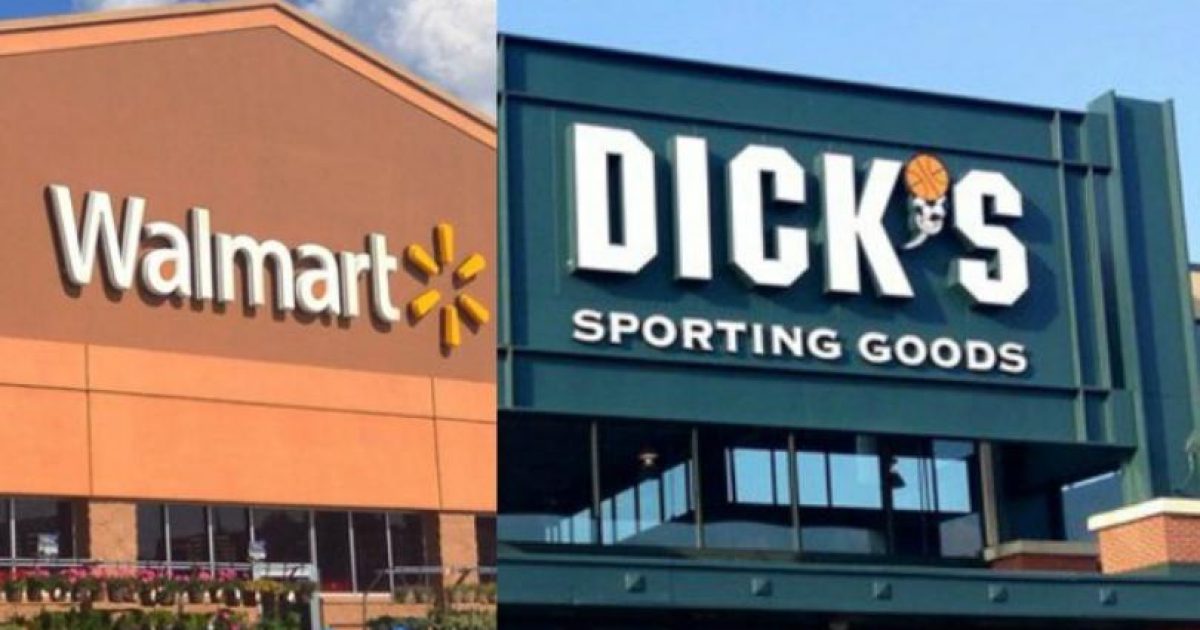 And, so it begins.  In a previous article on Freedom Outpost titled “Anti-Constitutionalists Praise Retailers Violating Discrimination Laws When It Comes to Guns“, large retail outlets, such as WalMart, Dick’s Sporting Goods, and LL Bean, were denying individuals under the age of 21 from purchasing long rifles while anti-constitutionalists praised these CEOs for their proactive stance against “gun violence.”  The article suggested that any individual or group of individuals who suffered discrimination by these large retailers should use the same laws to sue these retailers that anti-constitutionalists used against Christian private businesses, forcing the business to close due to the exorbitant settlement levied against it.

Breitbart News reported that a 20-year-old young male has filed suit against retailer Dick’s Sporting Goods for refusing to sell him a Ruger 0.22 rifle based on age, which is the new policy Dick’s Sporting Goods enacted after the Parkland, Florida shooting.  Moreover, the young man initiated a lawsuit against WalMart for the same reason – the policy adopted to deny the purchase of long rifles to individuals under the age of 21.

Watson attempted to buy the rifle “on or about February 24” at a Medford, Oregon, Field and Stream store. (Field and Stream is subsidiary of Dick’s.)  Watson’s suit, filed in the Circuit Court of Oregon for the County of Jackson, says a store employee refused the purchase and indicated, “He would not sell [Watson] any firearm, including rifles and shotguns, or ammunition for a firearm, because [Watson] is under 21 years old.”

The employee referenced Dick’s recent policy shift, disallowing firearm sales to anyone under 21, and cited the policy as the reason for denying the sale.

Watson’s suit alleges that Dick’s policy violates Oregon law against age-based discrimination for people 18 years and older in places of public accommodations. State law includes prohibitions against discrimination in stores that are open to the general public.

Watson also filed a separate suit claiming a Walmart store in Josephine County, Oregon, discriminated against him by denying him a rifle sale “on or about March 3, 2018.” As with Dick’s, the Walmart employee at the gun counter allegedly told Watson that rifles and shotguns could not be sold to individuals under the age of 21. The employee indicated that ammunition for firearms could not be sold to anyone under 21 either.

In both suits Watson alleges that the defendants, Dick’s and Walmart, not only discriminated but “advertised … unlawful discriminatory policies by issuing a press release, and other materials, stating that [the defendants] will no longer sell any firearms or ammunition to any person under the age of 21.”

It appears the Oregon law is not on the side of the retail outlets.  ORS 659A.403, Discrimination in place of public accommodation prohibited, states:

1)Except as provided in subsection (2) of this section, all persons within the jurisdiction of this state are entitled to the full and equal accommodations, advantages, facilities and privileges of any place of public accommodation, without any distinction, discrimination or restriction on account of race, color, religion, sex, sexual orientation, national origin, marital status or age if the individual is of age, as described in this section, or older.

(2)Subsection (1) of this section does not prohibit:

(c)The offering of special rates or services to persons 50 years of age or older.

This is the same law sodomites used against a Christian business resulting in that business closing due to the exorbitant settlement and the government concluding the business owners could not exercise their “beliefs” while open to the public.

Despite the case cited being over exercising the Christian religion, the Supreme Court opened the door to government interference in all exercises of belief systems when the highest judicial court accepted moral relativism, secular humanism, etc. as being “religions.”

Therefore, one can say that no business owner can exercise his/her belief system while conducting a private business, under Oregon law, if that belief system results in disparaging a sect of the population.

But, since government decided to meddle in private businesses, the same standard applies to large retailers as well as small ones no matter how altruistic one may think the owner’s belief system may be – in this case, enacting a gun control policy after a tragedy.

Moreover, many citizens postulated the homosexual sodomites intentionally targeted the bakery specifically for the intent to file a lawsuit.

Mr. Watson may have entered the sporting goods and the low price giants in Oregon to “test the waters” specifically to file a lawsuit to challenge the retail outlets on their “policy” versus the law.

It is no different than homosexual sodomites specifically targeting Christian bakers and florists in order to file a discrimination suit.

While the Supreme Court contemplates the Colorado baker’s case involving the same exercise of religion, expecting to rule later this year, this “rifle ripple” case could hinge on the court’s decision.

Should the Supreme Court uphold the baker’s premise of free exercise of religion, even when conducting a business, the ruling could expand to other belief systems meaning a support for the policies of Dick’s and WalMart, but only if these retailers are claiming the policy is based on a belief system.

CEO and Chairman of Dick’s Sporting Goods,  Ed Stack, claimed in a letter the action taken was not one based on a “belief system”, but in response to Parkland students calling for gun control legislation by Congress.

We have tremendous respect and admiration for the students organizing and making their voices heard regarding gun violence in schools and elsewhere in our country.

We have heard you. The nation has heard you. We support and respect the Second Amendment, and we recognize and appreciate that the vast majority of gun owners in this country are responsible, law-abiding citizens. But we have to help solve the problem that’s in front of us. Gun violence is an epidemic that’s taking the lives of too many people, including the brightest hope for the future of America – our kids. Following all of the rules and laws, we sold a shotgun to the Parkland shooter in November of 2017. It was not the gun, nor type of gun, he used in the shooting. But it could have been.

Clearly, this indicates on so many levels that the systems in place are not effective to protect our kids and our citizens.

We believe it’s time to do something about it.

Clearly, Dick’s did not act out of the management’s “belief system” but in response to “useful idiot” students lobbying to prohibit the sale of a semi-automatic firearm popular for hunting, sport shooting and self-defense, and request restrictions championed by anti-constitutionalists short of a total firearm ban and confiscation.

Interestingly enough, anti-constitutionalist commentators emerged to claim a private business has the right to make their own policies and Mr. Watson should go elsewhere.

Is this not what constitutionalists have been saying?  Of course, it is.

However, the right of private business to make their own policies doesn’t apply when sodomites are involved, according to anti-constitutionalists.

While these individuals would never admit it, the only reason they are backing the retailers now is that it serves their agenda of gun control, oops – people control, leading to gun confiscation.

The confusion has just begun since government usurped authority to interfere in private business and anti-constitutionalists try to “have their cake and eat it too.”

However, the law has to be applied equally or ditched altogether.

Getting government out of the arena to exert force in the free market system is the best solution.

Let private businesses make their policies and consumers choose whether the business succeeds or fails.

Until then, a pushback against restricting individual rights should proceed.