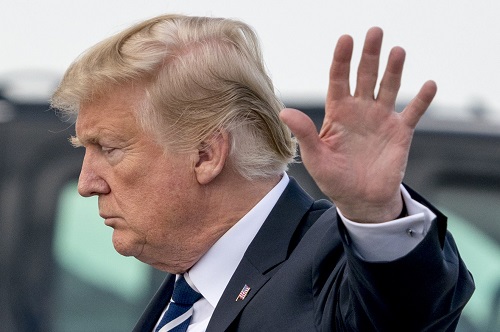 First, I would like to say that the timing of Donald Trump’s announcement on expansive trade tariffs is unusual if not impeccable. I say this only IF Trump’s plan was to benefit establishment globalists by giving them perfect cover for their continued demolition of the market bubbles that they have engineered since the crash of 2008.

If this was not his plan, then I am a bit bewildered by what he hopes to accomplish. It is certainly not the end of trade deficits and the return of American industry. But let’s explore the situation for a moment…

Trump is in my view a modern day Herbert Hoover. One of Hoover’s first actions as president in response to fiscal tensions of 1929 was to support increased tax cuts, primarily for corporations (this was then followed in 1932 by extensive tax increases in the midst of the depression, so let’s see what Trump does in the next couple of years).  Then, he instituted tariffs through the Smoot-Hawley Act.  His hyperfocus on massive infrastructure spending resulted in U.S. debt expansion and did nothing to dig the U.S. out of its unemployment abyss. In fact, infrastructure projects like the Hoover Dam, which were launched in 1931, were not paid off for over 50 years. Hoover oversaw the beginning of the Great Depression and ended up as a single-term Republican president who paved the way socially for Franklin D. Roosevelt, an essential communist and perhaps the worst president in American history.

This is not to say Hoover was responsible for the Great Depression.  That distinction goes to the Federal Reserve, which had artificially lowered interest rates and then suddenly raised them going into the economic downturn causing an aggressive bubble implosion (just like the central bank is doing right now).  But Hoover did actually aid the Fed in their undermining of economic stability by pursuing policies which were poorly timed.

I’m hitting readers with all of this because I am growing rather tired of the contingent of Trump apologists in the liberty movement scrambling to defend every single Trump action no matter how illogical. These people should know better.  Sorry, but Trump is not “playing 4D chess” against the globalists.  His primary initiatives have only served so far to create a useful distraction away from the globalists.

The disturbing key to all of this is the fact that many of Trump’s policies are things that I and many others have argued for in the past. The problem is, he is implementing them out of order and with bad timing, which will only make such policies appear destructive in the end, rather than constructive.

In terms of the implementation of tariffs, the people who are defending this action at this time do not seem to understand the basics of international trade. Tariffs can only be enacted from a position of economic strength and resource development. This strength comes from internal self-sufficiency in production; meaning, in order for the U.S. to force a trade balance (which is what tariffs are supposed to do) the U.S. must have a strong industrial base and MUST be capable of producing most if not all necessary goods and goods in broad demand.

The fact is, U.S. manufacturing has been utterly outsourced by the very corporations Trump just gave a 10% tax cut to, and rebuilding that industrial base would take decades. Why? Because there are no incentives for corporations to bring manufacturing back.

As I already stated, Trump is instituting potentially solid policies but he is doing so out of order. Tax cuts for corporations should have been enacted only as an incentive for manufacturing jobs to be returned to America. Instead, corporations got tax cuts for absolutely nothing. And will those tax cuts go towards more jobs or innovation? Nope. They will be going to pay off unprecedented corporate debts, and stock buybacks, most of which were accrued through borrowing from the Federal Reserve.

Will this stock buyback bonanza even generate new highs in the Dow? Probably not. But I’ll explain why that is later.

If Trump had given tax incentives for corporations to bring manufacturing back into the U.S., and then given those corporations a few years to make the shift, only then would tariffs have been an effective action. But as the situation stands now, we have minimal tangible production in this country, and, historic debts held by the same overseas competitors that Trump is now seeking to “teach a lesson.”

Debt is the next issue which needs to be addressed before tariffs can ever be implemented in a practical way. In terms of national debt, rather than setting up a plan to reduce U.S. debt expenditures, Trump is increasing debt by reducing taxes while at the same time increasing spending. Trump did not take a hard stand on the debt ceiling debate as he originally claimed he would, and so, the debt train continues unabated.

Who is going to purchase this debt, I wonder? Over the past several years the largest buyer of U.S. treasury debt was the Federal Reserve through fiat money creation. Now, the Fed has tapered quantitative easing and is dumping their balance sheet at a rate faster than anyone expected. The Fed is pulling the plug on its artificial support of the economy.

The next largest buyers are major foreign central banks in countries like China, Japan and to some extent the supranational EU. If the debt buyers of last resort are now the very same countries Trump is seeking to enact tariffs over, how do you think this little theater will end? Yes, with a dump of U.S. treasury bonds and perhaps the dollar as world reserve by those nations.

But what about the U.S. consumer? Isn’t the consumer market in America so enticing that nations like China would “never dare” dump U.S. debt or the dollar? No, not really. If we are talking about a trade “war,” then a country like China, which has a vast manufacturing base and which has also been building up its own domestic consumer market, would be willing to make the sacrifice. America would be hurt far more by the threat of debt default and the loss of the dollar’s international buying power than China ever would be by the loss of American consumers.  With tariffs being implemented, they may lose the American consumer anyway.

Our retail market is hardly as appetizing as it was 10 years ago given the decade of drudgery Americans have endured, with the largest number ever of working age citizens no longer participating in the jobs market, as well as real worker wages in continued decline while the American consumer is now more indebted than at any other time in history.

All of these negative effects are weighing down our economy while the Federal Reserve is quickly deflating the fraudulent markets that the establishment used during the Obama administration to argue that America was “in recovery.” Of course, alternative economists have known since the beginning that this was a lie, and that the only thing propping up the economy and stock markets was central bank manipulation.

The Fed under Jerome Powell has made it crystal clear that they WILL be raising interest rates and cutting the Fed balance sheet, perhaps more than their dot plots had indicated in the past. Without low rates and a steadily rising balance sheet we have already seen the results. Stocks in particular have gone crazy compared to the past few years, dumping nearly 10% one week, spiking about half that the next week. One thing is certain, the supposedly endless bull market induced by the Fed years ago is now over. Stocks are in heart attack mode.

It is no coincidence that the first two times the Fed reduced its balance sheet the Dow plunged over 1,000 points. The latest dump of $23 billion at the end of February resulted in a drop of around 1,500 points. It is too early in this process to know what the trend will be, but it seems to me that stocks are being steam valved down every month. With a marked decline just after a balance sheet dump, followed by a less impressive dead cat bounce the week after.

In the meantime, Trump’s “trade war” is now being blamed in the mainstream for the decline in stocks that the Fed is actually responsible for. As I have always said, Trump is the ideal scapegoat for the inevitable economic crisis the central bankers have staged.  Trump’s tariffs might exacerbate the problem, just as Hoover’s policies did in the beginning of the Great Depression, but the blame rests squarely on the Federal Reserve and central banks around the world.  Will the average person understand this dynamic once the dust settles on our financial system?  Probably not.

So, to summarize, while Trump has indeed set in motion policies that conservatives in general tend to approve of, he has done so in an impractical way that will ultimately be blamed for a market crash the Fed created.  If conservative ideals such as limited government and sovereign trade protection get the blame for an unprecedented economic crisis then this could sabotage conservatism for generations to come.  If elections are still even a factor as this crisis unfolds, the chances of the public accepting a socialistic nightmare regime after Trump exits the White House are high. And, the banking elites that conjured the whole mess will escape once again without any punishment.

The question we must ask is this – Is Trump aware that his policies are creating a perfect distraction for those same banking elites? I believe we will know for certain the answer to that before 2018 is over.