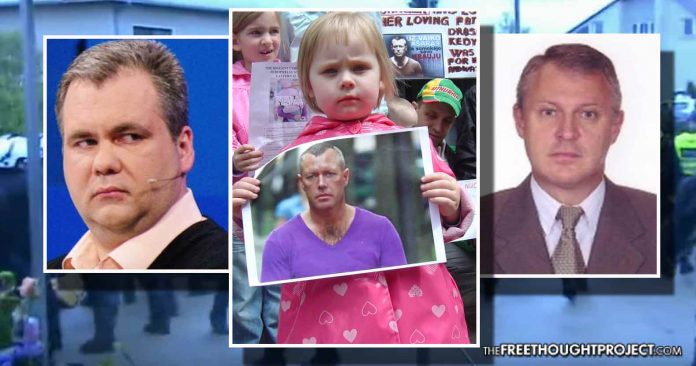 A teenage refugee from Lithuania has come forward with a White House petition and a damning testimony showing what happened after his family tried to expose a little girl’s abusers. When his four-year-old cousin accused two high-level government officials—describing it in heartbreaking detail—Korolis Venckienė learned the hard way how the government protects its vilest members, up to and including using hundreds of militarized police and even murder.

As Venckienė explains in his petition on WhiteHouse.gov, this nightmare started when their family attempted to seek justice for the sick men who allegedly raped his four-year-old cousin.

“In 2008, 4-year-old Deimante Kedyte described her sexual assault by high-level Lithuanian officials. Her testimony was later verified as true by 4 separate commissions. She never had her day in court,” Venckienė wrote.

When the teen’s uncle, Drasius Kedys, Deimante’s father pushed for the men to be prosecuted for what they did to his daughter, he was murdered.

“Her father pursued justice, but was murdered in 2010,” Venckienė said.

According to reports, the girl’s father, Drasius Kedys was abducted and brought to a secret bunker from the old Soviet Union where he was brutally tortured, fingernails were torn out, and his bones were smashed and partially cut off. Finally, the torturers tied him into a straightjacket and drowned him in a nearby storage lake.

In spite of all the evidence showing horrifying violence enacted against Kedys, the “official” government verdict was that he drowned in a puddle.

After Kedys was murdered, Neringa Venckienė, Karolis’ mother, and the little girl’s aunt, was given custody of Deimante as it was the little girl’s mother who allowed her elite political friends to have their way with her daughter.

Neringa Venckienė is a former Lithuanian judge and Parliament member who was brutally persecuted by the government after she attempted to expose this corruption.

After they silenced the father, the government set their eyes on the little girl who could also expose them.

“Deimante’s aunt, Neringa Venckiene, was awarded custody of the girl and provided a loving home,” reads the petition. However, “when Neringa started The Way of Courage Party to fight corruption in Lithuania, she, her family, and supporters were persecuted by the government. In May of 2012, a terrified Deimante was abducted from Neringa’s home by 240 government agents.”

The horrifying raid was recorded on video as hundreds of special forces police officers raided a family’s home to kidnap a little girl for accusing high-level government officials of raping her.

“To stop the anti-corruption and truth movement, government forces had to eliminate my mom because she was not intimidated,” Venckienė said. “The Lithuanian people elected her to Parliament to fight against corruption and to seek the truth. She proposed many laws among which there was stricter punishment for pedophiles, but all of them were blocked by the dominant parties in Parliament. When the prosecutors brought charges against my mom, all of her opponents announced that they’ll support the removal of her legal immunity, before the investigation took place.”

My mom became a target after she publicly started speaking about the bribery and corruption in the Lithuanian courts, the government and its media did not succeed in intimidating her. My 8-year- old cousin Deimantė, whose father was murdered, was abducted by government forces from my mother’s care. My mother was her legally appointed guardian at that time. The government called it “a child’s return to her mother operation,” but that was actually an elimination of an inconvenient witness operation with the help of 240 special forces and the intimidation of everyone in Lithuania who sought the truth in the pedophilia and murder case (more people were murdered in this case than just my uncle). My cousin was returned to the person she was testifying against. I was really scared and could not even imagine what is going to happen to Deimantė.

After this horrific incident, Neringa—who now feared that her own son’s life was in danger—then fled to the United States in 2013.

According to Karolis Venchiene, “today, the Lithuanian government continues to persecute Neringa by attempting to get the U.S. to extradite her back to Lithuania.”

Although they moved here to find refuge, two weeks ago, as Venckiene explains, “mom was arrested, and the Lithuanian government is seeking her extradition, before the political asylum case is over.”

Whether or not the United States will send Neringa Venckienė back to Lithuania—where she will likely be persecuted for exposing government criminals—is currently unknown. However, as TFTP has consistently reported, the problem of elite pedophilia knows no borders and these depraved individuals will go to any lengths to maintain their operation.

Below is Karolis Venckiene’s most shocking video, in which he backs up all of his claims with sources and, in some instances, heart-wrenching video. If you would like to help Venckiene and his family seek justice, please consider signing the petition here.