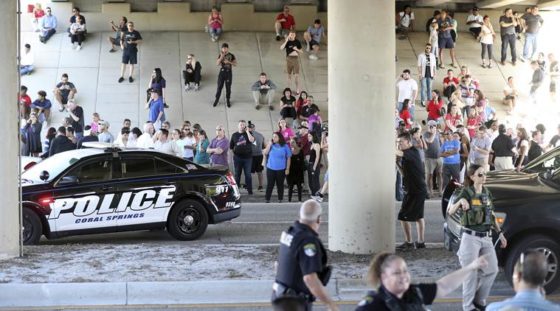 Two Florida SWAT team members have been suspended from duty for responding to the shooting at a school in Parkland on Valentine’s Day without permission. The two officers headed to the school before they received orders to do so and will now face punishment.

The Florida Sun-Sentinel reported on Wednesday that two SWAT officers from the Miramar Police Department who were on duty headed to the Marjorie Stoneman Douglas High School when they found out a gunman had started shooting, even though they hadn’t been instructed to. According to the police department, that created a safety issue that resulted in their suspension.

According to The Hill, detectives Jeffrey Gilbert and Carl Schlosser, the two officers, were reportedly in the area where the shooting occurred. The Broward Sheriff’s Office said Wednesday it could not confirm whether anyone spoke with Miramar that day, but said Miramar’s SWAT team was “not needed” during the incident.

“While it may have been a violation of policy to not notify their supervisors that they were going there, their intentions were brave and heroic, I think,” Broward County PBA President Jeff Marano said Wednesday. One of the suspended officers told supervisors he was in the Coral Springs area when the gunfire happened; it’s not known where the other drove from, police spokeswoman Tania Rues said. “They were both close by [the high school],” Rues said.

A third SWAT member, Officer Kevin Gonzalez, was suspended for violating the department’s social media code of conduct over posts that portrayed the department and the city in a negative light, the Sun-Sentinelreported. Rues said she “could not comment further on where he may have posted information about the mass shooting or what was written.”

All three were notified February 22 of their indefinite removal from what their department called a “privileged program” and all were ordered to surrender their SWAT-issued rifles, but they remain on active duty for their other assignments, Rues said. Lessons learned from the Aurora, Colorado movie theater shooting and the Fort Lauderdale-Hollywood International Airport shooting “clearly demonstrate that a controlled, organized response is what is most effective,” Rues said.