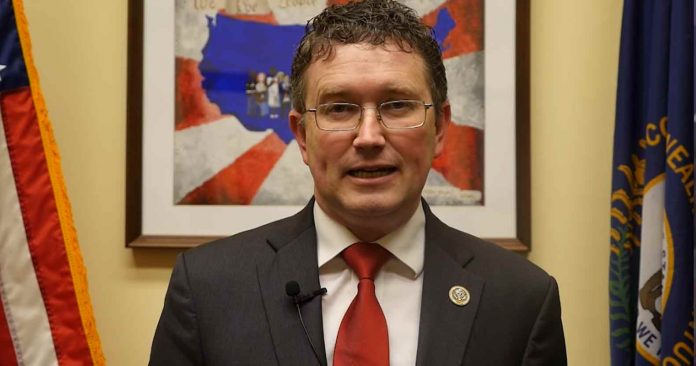 The same congressman who warned in late 2017 that the United States government was waiting for the next mass shooting in order to pass sweeping gun control measures, is now claiming that those measures could be passed in the next week, but they will be slipped into a larger bill.

Kentucky Rep. Thomas Massie warned that while members of Congress have suggested raising the legal age to buy guns or banning certain firearms, the real legislation is much worse, and it could be passed as early as next week.

“We’ve got about a week to act,” Massie said in a video he shared on social media. “I want to let you know what’s going on in Congress as far as gun control goes. You’ve heard a lot of ideas floating in the news—raising the legal age to buy a long gun, for instance—or a new assault weapons ban. Any number of bad things have been mentioned. But I wanted to boil it down for you.”

Massie referenced comments he made in December, when he warned of the provisions included in H.R. 38, the Concealed Carry Reciprocity Act, which states that its purpose was to amend “the federal criminal code to allow a qualified individual to carry a concealed handgun into or possess a concealed handgun in another state that allows individuals to carry concealed firearms.”

Packaged with that bill was H.R. 4477, the Fix NICS Act, which would amend the Brady Handgun Violence Prevention Act to “require each federal agency and department, including a federal court, to certify whether it has provided to the National Instant Criminal Background Check System (NICS) disqualifying records of persons prohibited from receiving or possessing a firearm.”

Massie noted that the Senate is proposing an almost identical version of the Fix NICS Act, which has been cosponsored by Senators Dianne Feinstein and Chuck Schumer—both extreme gun control advocates. It will allocate $625 million to expand the national background check database and will advance former President Obama’s goal to pressure other government agencies into increasing the number of names in the NICS database that are banned from gun purchases.

“What you don’t know, and what virtually no one in Washington wants you to know, is that House leadership plans to merge the Fix NICS bill with popular Concealed Carry Reciprocity legislation, HR 38, and pass both of them with a single vote,” Massie said in December.

While it may seem like they are on opposite ends of the spectrum when it comes to the Second Amendment, it appears that both Democrats and Republicans are working together to advance this legislation. The Fix NICS Act was originally introduced on Nov. 16, 2017, as H.R. 4434 and it was sponsored by Democratic Rep. Henry Cuellar. Then on Nov. 29, 2017, an identical version of the bill with language added to commission a bump-stock study was introduced as H.R. 4477 and it was sponsored by Republican Rep. John Abney Culberson.

Massie noted that while there are a number of glaring problems with the Fix NICS Act, one of the most alarming is that “it compels administrative agencies, not just courts, to adjudicate your second amendment rights.”

“The bill encourages administrative agencies, not the courts, to submit more names to a national database that will determine whether you can or can’t obtain a firearm. When President Obama couldn’t get Congress to pass gun control, he implemented a strategy of compelling, through administrative rules, the Veterans Administration and the Social Security Administration to submit lists of veterans and seniors, many of whom never had a day in court, to be included in the NICS database of people prohibited from owning a firearm. Only a state court, a federal (article III) court, or a military court, should ever be able to suspend your rights for any significant period of time.”

Congress is now attempting to pass the Fix NICS Act by including it in H.R. 4909, the STOP School Violence Act, which it plans to pass next week. Massie warned that the constituents who call their representatives and express support for “stopping school violence,” will unknowingly offer their support for a bill that could allow unqualified government agencies to take away the Second Amendment rights of law-abiding citizens.